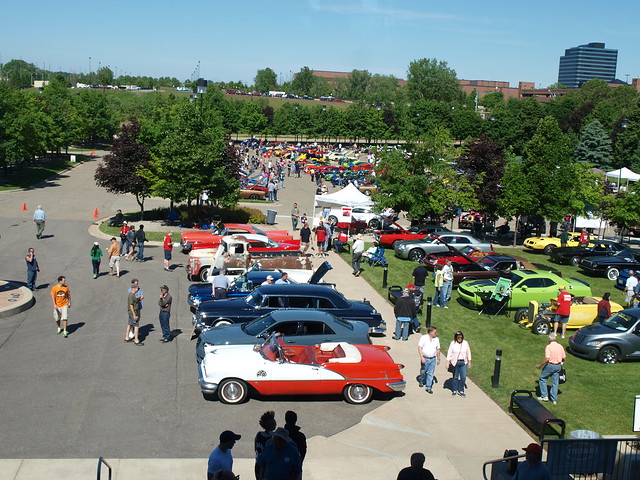 Could *this* happen at the old Conner Avenue plant in the near future? – Photo by Randy Stern

Remember when Fiat Chrysler Automobiles closed the Walter P. Chrysler Museum on their Auburn Hills, Michigan campus? The biggest question that came out of the closure of this center of automotive history was the disposition of the collection curated at the museum. There was a lot of historical vehicles in this collection that not only needed a home – but needed to be preserved by the company.

Around the same time, another closure was announced. It was FCA’s Conner Avenue facility. This was the production facility of the Viper, which was being phased out due to low demand for the Dodge/SRT front engine/rear drive supercar.

It seemed serendipitous that the two closures would become intertwined with the future of both the historic collection and the Conner Avenue facility. FCA announced that its 400-vehicle historic collection will be relocated to the Conner Avenue plant as a meeting and display space for the company. FCA stated they will use 99,000 of the total 400,000 square feet of space at the former assembly plant, including collection storage and meeting space. They hinted that it would be open to the public at a later date.

In the meantime, FCA would auction off a 1,800-piece collection of Viper memorabilia to benefit the United Way of Southeastern Michigan. Maybe to make space for the new collection?

I applaud FCA’s decision to retain the Conner Avenue space for its historic collection. This is a great move for a location that holds historic value to the company. Conner Avenue gave us the Viper – a symbol of what Chrysler can do with an imagination and gumption. The rechristened Conner Center should be a place that honors this tradition through its extensive archives and collection.

There is one thing that concerns me. It is a very precious collection. It had been seen by the public before at the Walter P. Chrysler Museum space. With the eventuality that it would be open to the public, the question arises as to how it should do so.

It is not unusual for the industry to have closed or very limited access to key facilities and archives to the public at large. In Warren, Michigan, General Motors has its Heritage Center, where they have their own historic vehicle collection and archives in a location that is not open to the public. You can visit with a sponsor from the company or by appointment. But, the public could not simply show up and see what's inside.

This is also true for Toyota's and Honda's collection and archives in the USA. Honda has their USA collection near their Torrance, California headquarters. You have to contact them to gain entry, but make sure you have a purpose in doing so.

Could there be a chance that FCA's Conner Center could be open by request to enthusiasts, automotive historians, and the media? There could be. Yet, I would like to advocate that FCA should have the Conner Center open to the public for the collection to be seen by a specific group of patrons.

There is a deeply loyal enthusiast and customer base for FCA’s products – Moparians, to be exact. There is the possibility of engaging events, including the annual car show put on by the Chrysler Employees Motorsports Association. These groups would benefit from an open Conner Center as a space to be engaged with the company – in the city of Detroit.

That last phrase is extremely important. The Conner Center is in the northeast part of Detroit, bordering on the city of Warren along 8 Mile Road. In fact, FCA's Warren Truck Plant is about over a mile away from Conner Center. The neighborhood is not all that great and could be seen as unsafe for some folks, but there is an opportunity to do something special in that part of Detroit. There is access to Interstate 75 which leads up to FCA’s main campus in Auburn Hills, as well as Interstates 94 and 696, along with Woodward Avenue.

I know that "urban renewal" is a bad phrase, as is "gentrification." However, FCA has a golden opportunity to rekindle the area where Conner meets 8 Mile Road. How? Delicately to not upset the residents and businesses surrounding the facility. It also takes the city of Detroit to guide the process of putting the Conner Center on the map for the Mopar faithful.

Plus, it is the neighborhood where a certain Hip-Hop star named Marshall Mathers grew up.

While some may be skeptical about the community impact around Bel Air Center on 8 Mile Road and the plant space, it would take further engagement with the cities of Detroit and Warren, Wayne and Oakland counties, and FCA to make this a destination that is safe and involved with the community at large. The economic impact should be something to consider. It could have a positive effect on those neighborhoods around the Conner Center.

Then again, Detroiters heard this song-and-dance before.

First things first, secure the 99,000 square feet for your initial purpose as stated to the public. Then figure out what to do inside and out for the rest of us at a later date. No matter what you come up with, the Moparians will come. Trust me on this one, FCA.