We express our love for the automobile in many ways.

This is not just talking about the cars we own and drive, but rather outside of the vehicle. For example, we often use the inside our homes to extend this love. From posters, artwork, flags, signs – and so forth – to signify our love for one brand or rather the machine itself manifesting in many ways. You might even find some models – in plastic and/or die-cast metal – as a three-dimensional, scaled-down paean to our favorite vehicles.

You may even find some of these in a person’s office or cubicle at their place of work. If someone really loves cars, they will know by what in and around the computer – or, on the walls.

That is the thing: We often show our personality at work by how we dress up our workspace. It could be a calendar with cars on alternating pages, a picture – maybe a few – on the wall, and something even more significant. You may see the occasional scale model, which is traditionally reserved for the "boss' office" and normally mounted on a stand.

The latter is no longer the realm of the boss' office. Heck, you can see it at my current office.

There is something about scale model cars. They represent a solid reminder of what we remember and what we love. Sometimes, they show a connection of what you drove in the past or currently own. They might even show that you actually cars you dream about – favorite cars that you either your family had, you remember when they were new or just something that caught your eye that you could never forget.

In my cubicle inside CarSoup.com's offices is an enclosed overhead bin. That is where I put my collection of 1/18 scale die-cast metal car models. There are currently three of them – all fall in the category of cars I had seen and thought well enough to bring them to my office.

What is my reasoning? It is plainly obvious that I am not just automotive writer/editor/photographer. I am indeed an enthusiast with deep sense of carmmunity and passion for the subject matter. If you are an enthusiast or someone who is a journalist, I see no problem with showing how deep your love for it at a place you spend a chunk of your time at.

What are these cars? 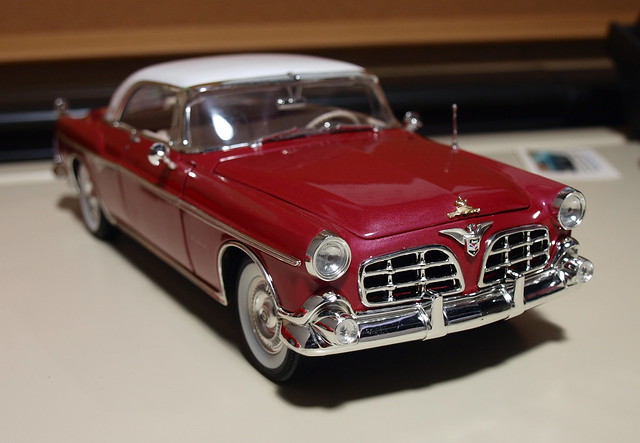 1955 IMPERIAL NEWPORT HARDTOP COUPE: This sat on top of Chrysler Corporation's lineup as they formed the new division to compete against Cadillac and Lincoln. It was the product of Virgil Exner's "Forward Look," though it shared a lot of design features with the less expensive Chrysler New Yorker. However, its front clip was shared with the famed Chrysler C-300 and it had its own rear fender design with "gun sight" tail lamps.

This model shows off the HEMI underneath the Imperial's hood, along with various details denoting the eagle and the crown as the brand’s signatures. I cannot figure out what is the primary color of this car, as it is sort of a magenta or deep dusty pink. The roof and most of the interior is in white. The beauty of the 1955 Imperial is the subtlety in trim, though it had a full length chrome strip running along the belt line. If there was one thing about American cars in 1955 was the mix of styling that was both subtle and elegant. Yet, they would serve as a prelude to the major change in automotive design and detail two years later.

To me, the Imperial was the easiest on the eyes in the luxury car field. It looked leaner than the Cadillac and more distinctive than the Lincoln. Yet, it shared the advances Chrysler cars had across every brand – from Plymouth through Imperial – in engineering and design. Since I have an affinity for Mopar products, the Imperial serves as a majestic reminder of my Chrysler lineage – both Plymouths bought by my father. 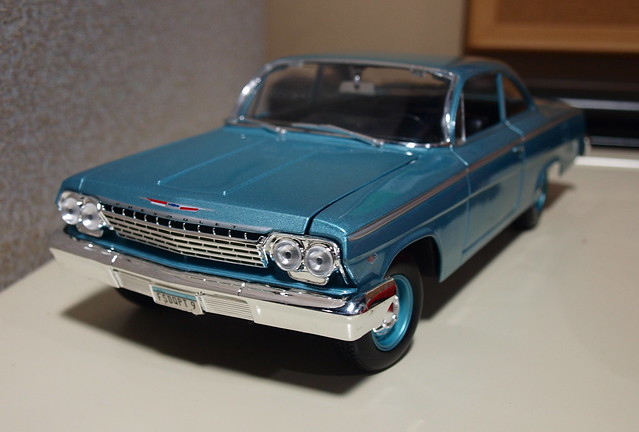 1962 CHEVROLET BEL AIR TWO-DOOR SEDAN: The fins were gone by 1961, yet some say the front end still harkened back to the 1959 models. In 1962, a more modern body style came into vogue for Chevrolet – cleaner and boxier than ever. Though the roofline for the two-door sedans was retained from 1961, you could see the emergence of a straightforward "Jet Smooth" Chevrolet image. The Bel Air became the middle model for the full-sized Chevy by 1958, thanks to the introduction of the Impala.

This aqua blue model has a black interior, a four-on-the-floor and a 409 cubic inch V8 under the hood. You might say this was a muscle car before the breed was defined by the emergence of the mid-sized car. The Bel Air had only a narrow chrome strip on the belt line and hubcaps on painted steel wheels, with blackwall tires. This car may look like a businessman's car, but it will destroy all comers in a quarter-mile drag.

Our family has a history of Chevrolets. While we had a 1960 Corvair and a 1967 Impala sport coupe, my mom’s side was more loyal to the brand – my mom's brother was a line mechanic for General Motors dealers in Culver City and West Covina/Covina – both near Los Angeles. Perhaps this 1962 is a symbol of our family's foothold in the brand. 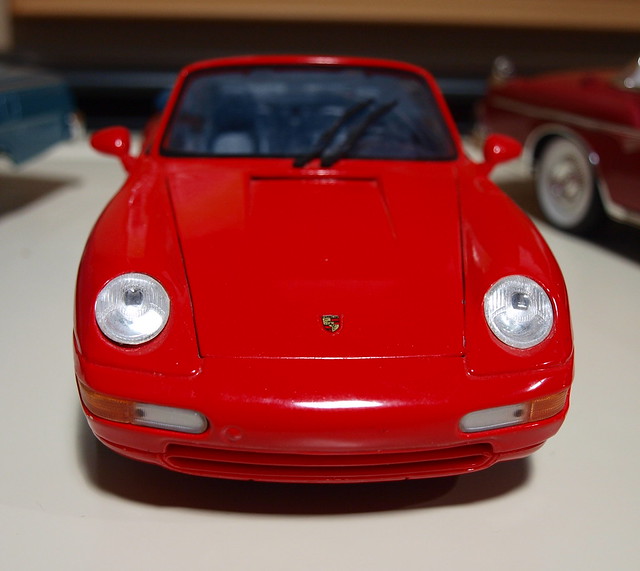 1994 PORSCHE 911 CARRERA CARBIOLET: One of my CarSoup.com co-workers gave me this model knowing I was putting together this collection at my desk. It seems apt to include a Porsche considering my work with the brand this year and that the CEO of the company has a nice example of an older air-cooled model.

The Type 993 was the last air-cooled 911 ever made. Yet, it had undergone more evolutionary design changes to distinguish itself – new front clip, new rear clip, realigned model designations and so forth. Still, it was a 911 – true to its size, shape and driving dynamics. I could tell by this red model that it was probably one signifying vehicle individualization, with its blue interior and top cover.

If there has been one sports car I would love to drive – it is the 911. Today's Type 991 is a far cry from the 993 in many respects. But, the 911 is a fifty-year odyssey that now exhibits comfort, luxury and optimal performance. When that time comes, I am grateful my co-worker instilled that incentive to achieve in taking the 911 for a well-deserved drive.

Obviously, I want to get more cars when they become available. I have a few ideas…it would be great to get a 1970 Plymouth Barracuda, a 1970 or 1971 Dodge Challenger, a 2015 Dodge Challenger, a Mercedes-Benz of some sort…who knows? It will depend on what my professional future will look like.

Not everybody has to go out and get a die-cast. One suggestion I make is to do a search for local shops that sell them. Acquiring them locally not only helps the economy nearby, but it will create a pipeline for future purchases instead of relying on internet commerce to do the same thing. Nothing against purchasing through the internet, but sometimes you may find that treasure right in your neighborhood or metro area.

What do you have in your collection? Or, would you like to start one? Reading this is a good start…