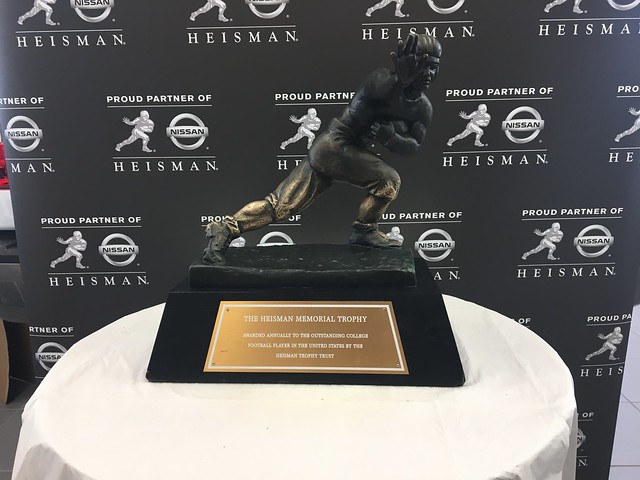 Yes, sponsorship. It is all about how proud a sports team, award, event, charity, building, and so forth is to be tied into a money-making enterprise that almost everyone is interested in. It is the tie that bridges A to B for its fans towards potential customers.

Thirty years ago, sponsorships worked on several levels. Perhaps, one could observe that it is now out of control. Everyone is sponsoring everything – even down to the minute item.

Since this is an automotive website, I will concentrate on brands, OEMs, and suppliers that lend their name to some form of sponsorship. Though they are not exclusive in the proliferation of attaching their good name to something that we might get behind. Banking and financial institutions, airlines, energy companies, retailers, websites, major employers, food and beverage companies…everyone's got their name affixed to something!

Shall I name a few…automotive ones, in particular?

In Nashville, there's Nissan Stadium and Bridgestone Arena. In Washington, DC, Audi's name appears at the home of the DC United soccer club. Detroit has Ford Field, but the pride of Dearborn also appears in arenas in Beaumont, Texas and Evansville, Indiana. Mercedes-Benz has their name on two major facilities – the Superdome in New Orleans and the new stadium in Atlanta. Anaheim is the home of the Honda Center. Not to be outdone, Toyota's name appears on eight sports venues across the USA.

Keep in mind, these are just in the USA. And, there's a lot more than just putting your name on a sports venue. Honda is the automotive sponsor of the National Hockey League, Kia has the National Basketball Association, Chevrolet with Major League Baseball, Hyundai and Ford Trucks offer two sponsorships for one National Football League.

Throw in a multitude of sponsorships for individual teams, collegiate athletic departments, sporting events, the arts, award shows, and other community events, and you have millions of dollars support of everything you can think of.

It all adds up, when you consider factors that drive sponsorships. There is the cost of reach, which is a measurement of the spend towards potential audiences. You also have to factor the unaided awareness per reach, which is more a passive approach of just putting the name out without spending a lot of money behind doing so. There is also the sales/margin per dollar spent, where the cost does come into play from actual sales of products. For example, could a Nashville Predators fan buy a new set of Bridgestone tires for their new vehicle because they attended a home game or two?

While these factors are seen as immediate – not just at the moment, but over a short term – there are some long-term factors to consider. One is to see the brand's attributes over a long term, which includes the association of the sponsorship with the cause, event, or the team. Would the Mercedes-Benz star on top of each of Dodger Stadium's scoreboard be remembered when you pick up a new C-Class sedan? Another example would be that logos that used to sit where the Mercedes-Benz is at now – Coca-Cola and 76 gasoline. Luckily, there is still a 76 gas station on the Dodger Stadium property – a sign of a long-lasting relationship between the ballclub, the stadium and the brand. Fans know about this relationship, as long as they were a Dodger fan in Los Angeles.

Lastly, consider the indirect benefits of a sponsorship relationship. This is seen in the automotive industry a lot, especially in Detroit. A good example was a program I was on where Chevrolet took me and a few of my area colleagues to the 2014 All-Star Game at Target Field. We saw how Chevrolet maintained its sponsorship of Major League Baseball, all the way through to the awarding of the vehicle to the All-Star Game's Most Valuable Player. Luckily, Mike Trout of the Los Angeles Angels picked the then-new Corvette.

Aside all of this, there might be a flip side to these sponsorship deals. What if we had an economic downturn? What if a company is not doing well financially? Obviously, the first thing that will be pulled back is spending on sponsorships that are seen as not beneficial to the brand. Would you still need them even in a down economy? If it keeps the brand relevant in the eyes of those pulling up from their low points, then the cost could be adjusted for a lower reach and sales return. That is just in theory, mind you.

Perhaps there could be a backlash if controversy would ebb into either the sponsor of the entity. Even though Volkswagen weathered the storm over the TDI and the emissions engineering issue, one could assume the reasons why Audi supplanted its sister brand in sponsoring Major League Soccer. Yet, one could wrong in that assumption, but one also cannot control the court of public opinion in this or any controversial matter, such as the TDI scandal.

Which brings up another issue regarding sponsorships – public perception. It is highly important that the sponsorship matches the entity. Nissan is the sponsor of the Heisman Trophy. This is actually a great match not just to help promote the top trophy in all of college football. It also helps to reach out to the collegiate community and its alumni towards eventual purchase/lease of Nissan vehicles. Nissan also sponsors the Gay Softball World Series, which is also a good engagement point for fans and participants to show how much Nissan supports the LGBT community.

This is where sponsorships need to be measured towards awareness and actual direct/indirect results. The sponsorship has to work. It has to be mutually beneficial. It has to be engaging. Otherwise, it's just a logo in the middle of a venue with no meaning whatsoever.