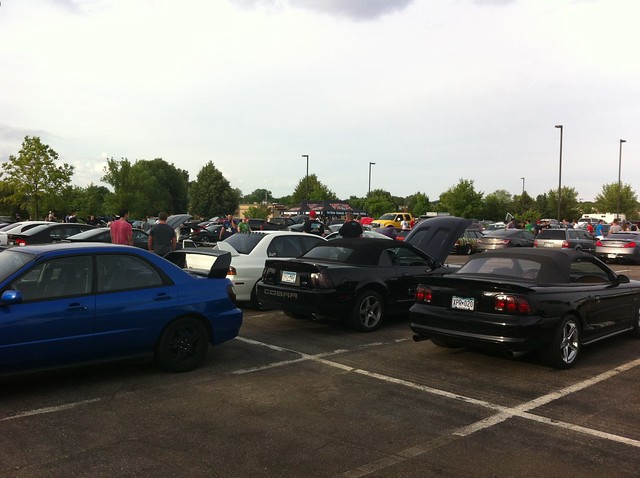 An example of Carmmunity done right. Photo by Randy Stern

We hate to see some of the things we enjoy as enthusiasts and carmmunity members simply disappear. Even worse, when these outlets for enthusiasm go away or change drastically because of the actions of a few.

Recently, social media provided fodder for this issue. One such video went viral of a person in a Ford Mustang at a shopping center parking lot evade local law enforcement. This was done with the help of some of the people who might be connected with the person in the Mustang. The incident was filmed, but provided without any background on what happened before or after this incident.

The other two incidents hit close to home. The FOX affiliate showed a report of a local business property owner in Nordeast Minneapolis who was beaten after he told a group of street racers to leave. This racing group held these races on the street in front of his property for years – illegally. The business property owner reported to be calm when he asked them to clear the road and leave. Instead, he wound up in the hospital with injuries, including several staples in his head. There are now reports that counter some of the story in regards to the "victim."

Lastly, a local meet held at a shopping mall parking lot was finally shut down by local law enforcement in Burnsville. This was due to some participants doing burnouts and speeding excessively when leaving the property. There was a fight that also went down at the same meet prior to the eventual shut down and relocation to an undisclosed location.

These incidents are nothing new. They have been a regular occurrence when dealing with grassroots efforts to build carmmunity. The downfall of the Sonic Wednesday meet in Bloomington this past summer was a perfect storm of its growth compounded by unwanted vehicular and individual behavior that attracted law enforcement towards the disbandment of the weekly car meet.

When a car meet or group is established, every effort is made to make things enjoyable for everyone that participates. Each individual involved brings something unique to the table. That would be a certain vehicle, specification, tuning, knowledge…and so forth. The point being is that enthusiasts will find common ground to create a carmmunity to fuel the passion and have fun doing so.

However, there is a caveat to making it fun and enjoyable. It has been said on here before that the one thing that would ruin a carmmunity is to run counter to the group or meet and do something that would upset it. The incidents mentioned in this article are clear evidence of this countenance that happens in every carmmunity.

If the ground rules state that there is a respect for traffic laws, law enforcement and property, does that give someone the license to do donuts, burnouts and such? What about "controlled conditions?" The latter is usually explicitly stated to allow for such behaviors if only sanctioned by the organizers of a meet or club. In most cases, the "controlled condition" usually does not exist. That never stopped anyone to be a hoon when it is an unwelcomed behavior – explicitly stated or not.

This is a tough subject to tackle, since it could be argued that talking about it would take "the fun" out of carmmunity. Yet, it is being discussed on social media. Read the reactions to these incidents. There are more people siding against the hoons than defending them. Or, are we calling them "ricers?" I am certain there are many words that could be describe these folks who would rather disrespect the property, the law and the organizers by doing things that satisfy those who run counter to them.

There are several approaches to this subject. Swinging the moral hammer only serves those who uphold righteousness in the carmmunity. Siding with those who attacked the business owner, aided and abetted the driver evading law enforcement, and caused the shutdown of grassroots meets across the country would be the same as committing these same atrocities.

That is where the quandary is. Where is the balance between enthusiasm and responsibility? Where is the line drawn when unacceptable behavior is called upon? Is it where safety and security is challenged?

These are the questions that carmmunities must address, if they want to continue the work they do for their fellow enthusiasts. The answers would prevent these behaviors – such as the altercation between street racers and a business property owner, burnouts that shut down car meets and crowd evasion of the law enforcement – from ruining carmmunities.

We cannot ruin carmmunity – whether it is by actions, ignorance or drama.