How do you know if a technology is good or not?

The technology in question is a familiar one to me – the lineup of Ford's EcoBoost engines. Ford went on to install a turbocharger – or two – to some smaller engines across their lineup. The idea was to prove that boost is more than just a modern substitute for good old power from a larger engine. Though equal in power, Ford claims they will turn improved fuel economy than the original engine for each vehicle.

Through my experience with several Ford and Lincoln vehicles equipped with EcoBoost engines, I have seen a series of results. In all, performance with the EcoBoost is quite good for each model I drove. The fuel economy part was a mixed bag.

Was I missing the point every time I drove a Ford or Lincoln product with one of these engines?

Perhaps I needed convincing. Ford provided that opportunity their EcoBoost Challenge Tour that was visiting several cities across the country. They made a stop in the Twin Cities across from the Mall of America in Bloomington. Ford was made aware I was coming and made arrangements for the media to come a day early to experience what consumers will participating in that weekend.

The EcoBoost Challenge was split up in several driving experiences. First, there is a place where you could learn how to drive a manual transmission. For those of us who have learned exclusively on automatics, a few of us may have either forgotten how to drive a manual or was unable to learn. Those who want to learn start with a simulator that helps you to understand the process of clutching and the use of both the brake and accelerator in coordination to situations and speed. Once you learn from the simulator, you move onto the actual drive on a small loop. For that, a 2015 Ford Focus SE with the 1.0liter EcoBoost turbocharged three-cylinder engine is ready to do so. That is where you take what you learned from the simulator onto a real live car. 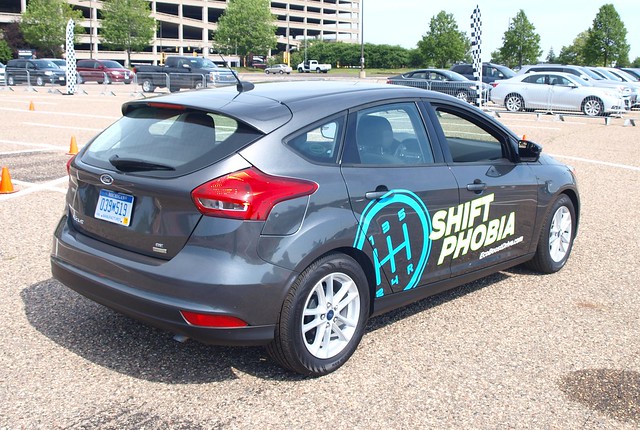 Was it easy? In my case, I learned something about myself as a non-manual driver – I need to slow down the process a bit. I have a tendency to engage and disengage the clutch quickly to achieve the shifts. That is incorrect. I learned to ease into the clutch and let the car roll by slowly backing off the clutch until I am able to transition to the accelerator. Braking was another thing I had to understand, by engaging the clutch first before putting on the brake. These things might by old hat to you, but these were major steps in trying to shake my "shiftphobia." Granted my try at the EcoBoost Challenge was a huge advance, I still have a lot of work to do to feel confident in using a clutch in an automobile. I’ll stick to automatics in the meantime.

The second station offers some form of competition for the attendees. Take a fleet of Focus and Fiesta STs and put them against each other. Looks fun, but my manual driving skills were not up to snuff to try it.

The next station gave attendees the opportunity to drive an EcoBoosted Ford against a competitor. Fofr truck lovers, there was a F-150 going up against a Chevrolet Silverado. Crossover fans had two to compare. The compact segment shows the Escape going up against the best-selling Honda CR-V. However, the mid-sized comparison was what I did. Since I was reviewing a 2016 Kia Sorento that week, I chose the new 2015 Ford Edge Sport to go up against a Toyota Highlander. Having experienced the Highlander, I knew this tightly set up course was not going to be in the big Toyota's factor. It lumbered through some of the more evasive maneuvers and the corners. That is where the Edge beat the Highlander. This is why I cannot wait to bring the Edge in this fall.

To make matters more complicated, Ford added a 2016 Explorer Sport to the Challenge arena. I love the Explorer Sport with its 365-horsepower EcoBoosted 3.5liter twin-turbocharged V6. I could tell this one will blast even the Sorento off of the course. It was larger, but the Explorer was much more maneuverable than the Highlander. Yet, the real winner in this four-way comparison (including the Sorento sitting out in the parking lot) is the Edge. 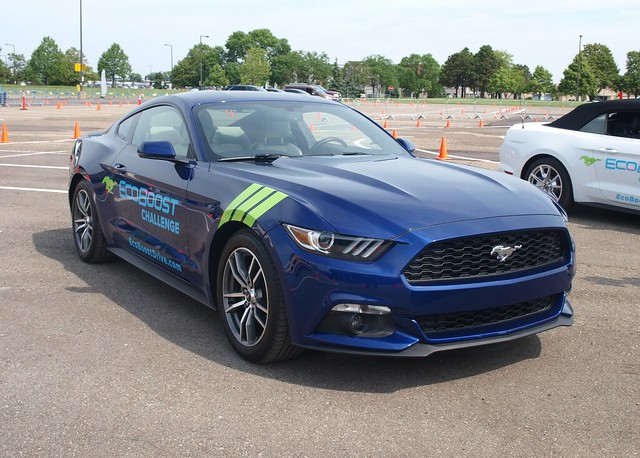 On the other side of the tent was a bigger autocross challenge involving the 2015 Ford Mustang with the 2.3liter EcoBoost engine. Having never driven in a Mustang since the early 1990s, this was a real treat. I strapped myself into an automatic coupe and set off. One thing I forgot to tell myself that this course was not designed to replicate Road America. There were no apexes. In fact, there was not enough room to make a line. Obviously, I was not doing something on a track, but in a parking lot with cones to do certain maneuvers in zones. I will say that I cannot wait to drive another 2015 Mustang. This is scheduled to happen soon.

My final challenge was to put a new Ford out on the street. There were several available to do exactly that, including vehicles I have yet to review. The first vehicle was a 2015 Expedition EL King Ranch, a big SUV with sumptuous luxury, a massive presence and a twin-turbocharged EcoBoost 3.5liter V6. Having driving its short-wheelbase luxury cousin, the Lincoln Navigator, I was more prepared for the Expedition than before. Actually, I liked the longer wheelbase with its smooth ride and front maneuverability. It cornered flatter than I thought it would – almost like a 2015 Chevrolet Tahoe LTZ with Magnetic Ride Control. I came away impressed with the Expedition.

Next up was the 2015 Transit Connect Titanium long wheelbase wagon with a 2.5liter four-cylinder engine and an automatic transmission. Normally, one would think of a Transit Connect as a cargo van. You will be wrong. This is not just adding seats and carpeting inside, Ford really took the time to make it more amenable for families to use. Not to mention, it is a good alternative to traditional minivans and a more spacious choice over the Mazda5. Being tall and wide, I was able to sit in the third row. Getting in and out would mean using your best foot forward, as the second row passenger side seat can be set flat for better load in and out. All seats eventually fold flat for optimal cargo hauling. You might say that based on is pricing – base prices range from $24,710 to $29,185 – this could give compact crossover consumers another choice for family hauling.

My last drive was in a car that I admit needing more seat time in – the Focus. Luckily, Ford had a 2015 SE sedan with the 2.0liter FlexFuel four-cylinder engine and the automatic transmission. I had always had mixed opinions with Focus, but I wanted to see for myself whether the mid-cycle refresh yielded some positive improvements in this popular compact car. In short, the answer was "yes." The Focus drives very well and remains contemporary in this market. All good things, I suppose.

The next day brought the general public to the EcoBoost Challenge. You may have participated in it at the Mall of America stop – or at any of the stops it made this spring. I hoped your experience was good as mine was. 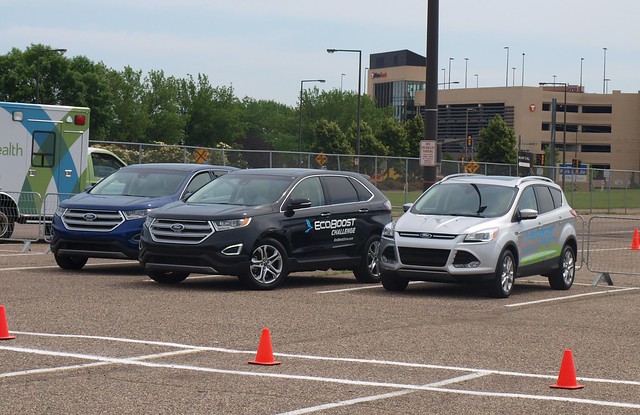 My overall impression: The consumer was given the chance to engage with new vehicle products in an environment that is fun and devoid of the stress found when visiting a dealership. Ford successfully did exactly what they intended on this tour by making sure that the people in attendance would comprehend the benefits of EcoBoost without the pressure to buy one. By using a variety of experiences, Ford's team on this tour accomplished something even more important – putting this technology in the hands of those who have not been exposed to it.

That last point alone was what I am most convinced about.