If you ask any enthusiast where the love for the automobile was nurtured, it might come from their first auto show experience.

The auto show is a safe place to connect with the automobile. Your admission into the exhibit hall is a license to dream. Once inside, you encounter cars, trucks and SUVs that you might see in your neighborhood. Then you encounter something you have never seen. Is it a concept? Or, a brand new model coming out soon? Or, a very rare and expensive piece of machinery that opens up your eyes to complete wonder and surprise.

Sometimes, you might even buy a car right at the show. For the most part, you come to shop…not buy. Well, maybe do some fantasy shopping. Fewer of us – including myself – work these shows. We're there to cover the show as media, others to represent their brand or OEM – in various ways. The auto show is a gathering point for those who appreciate the automobile, no matter the reason to attend it.

However, the auto show is not a modern invention. They have been around as long as the automobile itself.

In the USA, the first auto show was in 1900 at the Madison Square Garden in New York. On November 3rd of that year, the doors opened to a whole new experience for a fledgling industry. Around that time, only 4,200 automobiles were sold in the USA. They were fueled by gasoline, steam power and electricity. That first show had 160 automobiles on display and visitors were able to try a few of them on. They drove a 20-foot wide track to test the abilities of these early automobiles. A 200-foot ramp made of wood tested a car's ability to climb up – and down – a hill. It would be apropos that the sponsor of this first show was the Automobile Club of America.

That first show attracted 48,000 visitors, with ticket prices at 50 cents each. The newfangled automobile certainly garnered enough attention that November of 1900.

The next year – in 1901 – the number of vehicles on display jumped to 1,000. This was a sign that the industry was booming. The New York Auto Show became an annual event that remains one of the most important auto shows in the world.

Also in 1901, Chicago played host to its first auto show. It was held at the Chicago Coliseum where visitors paid 50 cents to see the latest fill the ground floor of the exhibit hall. Upstairs in the Coliseum, parts exhibitors showed off their wares. There were also seats for those who just wanted a bird's eye view of the entire show floor. By 1910, seventy-eight manufacturers were displayed in Chicago, which began to grow onto adjacent buildings as the years rolled by. The Coliseum would hold its final Chicago show in 1935. The next year, the International Amphitheatre hosted the auto show. However, in 1942, Chicago was among the many auto shows that would go into hiatus due to the country's involvement in World War II. The Chicago show would resume in 1950.

On the West Coast, Los Angeles held its first auto show in 1907 at Morley's Skating Rink. The show's success saw several venue changes through 1920, thanks to the growth of the industry. In the 1920s, the auto show included airplane exhibits. In 1929, an airplane caused an electrical fire that damaged the show. The next day, any surviving vehicles and exhibits were moved to the Shrine Auditorium. By 1939, the show saw a slump in attendance and interest. The next year, the LA Auto Show did not open and would remain on hold until 1952.

Though an auto show was put together in 1899, Detroit did not officially open one until 1907. It, too, would suffer the same fate as the Los Angeles show with interest waning. The Detroit show stopped in 1940 and did not reopen until 1954. You would think that being the center of the American auto industry that it would not have a show during the immediate post-World War II years. 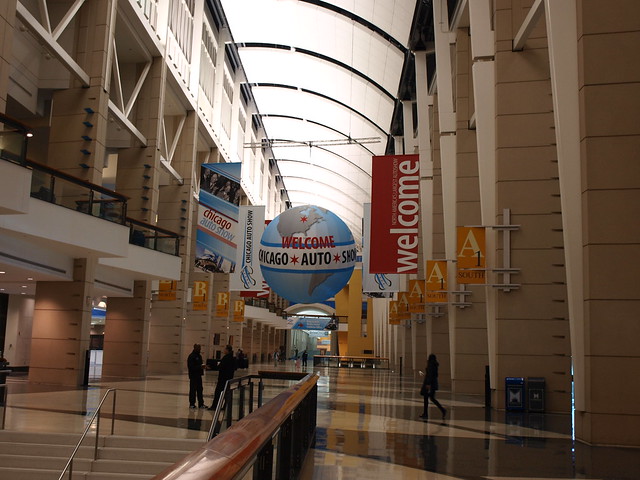 The four major USA shows offer a long history that entrenched their legacies while bringing the latest and greatest to the world's stage. These four spawned many auto shows across the country and around the world. Most of today's auto shows began after World War II, right when the automobile became the driving force of growth in the country.

Shows found new homes as modern convention centers began opening up across the country. In 1961, the Chicago Auto Show would move to McCormick Place. Back then, it was 300,000 square feet in space and held 400 cars on its show floor. Over the years, Chicago would grow to become the biggest auto show space in the country, yielding the largest consumer auto show attendance in North America.

Detroit, Los Angeles and New York enjoyed brand new spaces around the same time. By 1987, the Jacob Javits Center opened up as New York's current home to their show. All other shows fell line behind these four, though some have carved out a second tier reputation where media associations and direct OEM involvement. For example, auto shows in Houston, Washington DC, Portland Oregon and Miami would host special programming for regional media to interact with representatives of the manufacturers on various fronts from engineering to recapping brand new and future products.

Most shows around the country are like the one in Minneapolis – very consumer driven and reflective of the local marketplace. Though they do have programming and access to local media, but not on the scale of larger shows.

Some shows have taken the opportunity to create fundraisers out of them. Charity events are major pulls for the well-heeled to enjoy at a night at the auto show before everyone else descends upon the convention center the day after. From catered food and open bars to top notch entertainment, charity events benefit local communities with great rewards. The Chicago Auto Show hosts the biggest fundraiser in the city annually – First Look for Charity. All you need is to spend hundreds of dollars on tickets, dress very formally, bring an appetite and rock the night away – all for a group of great causes.

Today, a national auto show schedule would have every potential city and region on the map. Everywhere you turn, there's an auto show. Perhaps several on the same weekend. It is impossible to attend every one as spread out geographically, as they are. Yet, it shows signs that people want a piece of what they've seen online to catch a glimpse at the latest and greatest automobiles available in their corner of the globe.

These days, I have two shows that are on my calendar every year – Chicago and Twin Cities.

If you would have asked me at the 1971 Los Angeles Auto Expo whether I would be a regular attendee at either Midwest show, they just seemed like a far-fetched notion. Growing up in L.A., I was already surrounded by a fascinating collection of automobiles – which will frame the work I do. All I needed was the auto show experience, and, frankly, I did not know what to expect at age 7.

My family and I went down to the Los Angeles Coliseum Arena to see this foreign car-focused show in May of that year. It would be my first auto show I can recall attending. Back then, you had two auto shows – the LA Auto Show being the largest and held in January. Eventually, I would attend that show later in the decade inside the West Hall of the Los Angeles Convention Center.

In my younger years, auto shows would be elusive. I did attend the Los Angeles show in the early 1980s – cannot recall which year, though. When I moved to the Bay Area, I discovered the San Francisco Auto Show held at Moscone Center. Though smaller than any of the shows in Southern California, it was actually a good show – usually held around Thanksgiving. You had turkey the night before, then avoided the madness around Union Square during Black Friday by standing in line outside Moscone Center to go in the show. The late 1980s and early 1990s were good times indeed.

Through my meanderings, I found myself at auto shows in Washington DC, Milwaukee and Madison. In 2002, I attended my first Chicago Auto Show – as credentialed media. I showed up on the first public day with my then-publisher Tom Wray. We went around the hall and did our best to cover it for the website we worked together on. It was my first professional work covering this kind of event. It would definitely not be the last.

In addition to my media duties in Chicago, I had the privilege to fulfill the same obligations in Detroit and Los Angeles these past few years. These were framed by regular annual visits to the Twin Cities Auto Show held every March at the Minneapolis Convention Center. There would be a switch between my media and visitor caps as I fulfill my obligation to supporting the local auto show. Throw in a couple of visits to the auto show in St. Cloud, and you see how these events truly fill up the schedule. 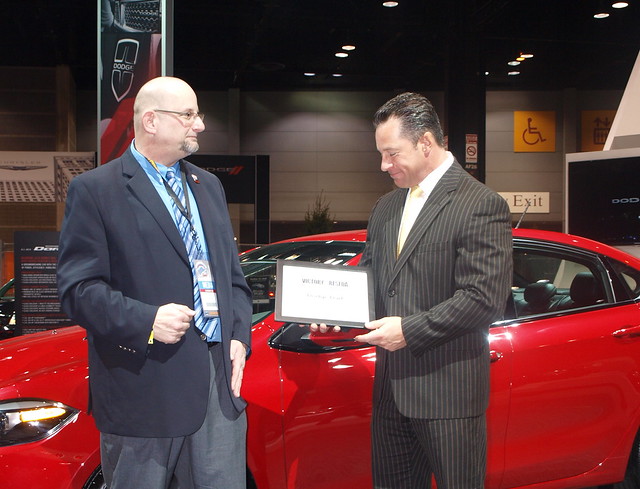 Randy handing off the 2012 VOTY to Reid Bigland of Fiat Chrysler Automobiles at the 2013 Chicago Auto Show. Photo courtesy of Victory & Reseda

On top of all that, I gave out a few accolades at these shows. They're called the Vehicle of The Year. You might remember those…

This year marks the seventh year I will work the Chicago Auto Show as a member of the media corps. Part of this obligation is being a proud member of the Midwest Automotive Media Association, the sponsor of the media breakfast that opens the press days in Chicago. It has been always been a good show to work and I always look forward to coming to McCormick Place every year.

The same can be said of the Twin Cities Auto Show. This has been a ten-year run for me and it gets busier every year. In the beginning, I just attended the show – as a paid visitor. Last year, I had to be there before the doors opened on the first day to cover some media opportunities. This year – who knows?

Yet the auto show always shine a huge light on where the industry is at. The vehicles displayed reflect where each brand is directed towards. The components of each show – displays, spokesmodels, sales staff from local dealerships and the sheer volumes of onlookers – just scratch the surface of the purpose of having these yearly events.

Some other elements bring even more to the show. The charity events where both donors and benefactors win. Entertainment, local and national celebrities, professional athletes that add to the lure of attending the show. Plus, added interactive attractions, such as Camp Jeep, consumer test drives, video game portals and so on, where everyone of all ages can take away something more exciting than looking at a car, truck or SUV.

Beneath the surface is the interest. You go to the show to see what's new, to try out the latest and to seek engagement towards the future – whether it is a purchase, lease, or for further research towards either one. If you were entertained, excited and had a good time – the auto show's producers have been successful and need a hand.

The auto show has not changed in 115 years. Nor has it changed in 44 years. It remains the one place where enthusiasm is still fostered inside of a convention hall for the benefit of car lovers – and every day consumers – to fully engage with the automobile.

As for me – it is another exciting day away from the office.