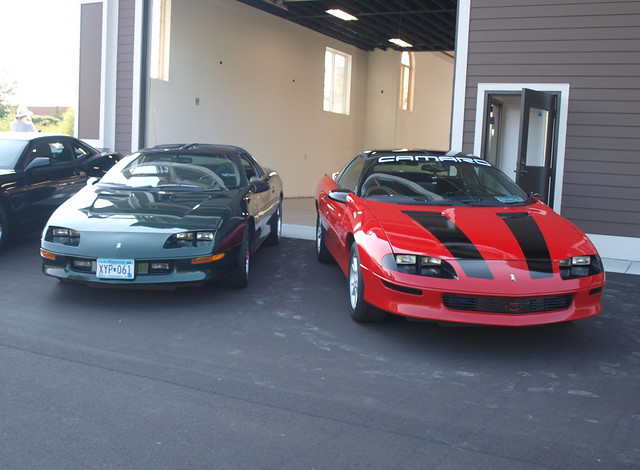 Since its debut in September, 1966, Chevrolet's Camaro has been a symbol of pride for General Motors. It was the Mustang killer that slayed all of its competitors in sales since the first one arrived into showrooms for the 1967 model years. While its competitors tried to ride the storm of new Federal vehicle regulations and the OPEC Oil Crisis, the Camaro resisted downsizing or, worse, product cancellation through the 1970s. Change came in the 1980s as the future Camaro arrived packing more power and a look that is unforgettable.

During the time of the third generation of the Camaro, customers began cross-shopping this iconic American sports coupe against Asian and European models – along with the Fox-body Ford Mustang. A Z28 was seen as a big V8-powered rival to the in-line six power of the Toyota Supra, the monster V6 of the Nissan 300ZX, the turbocharged rotary power of the Mazda RX-7 and the more expensive Porsche 944 Turbo. Although, Porsche enthusiasts would dismiss the Chevrolet as an absolute imposter not worthy of battle with the Stuttgart machine.

The end of the 1992 model year spelled many changes for the F-Body. General Motors announced that the Van Nuys plant will close with the building of the final third-generation models. The timing was not the best, since there was a Presidential election being contested. One would think things would be better after the Gulf War, but not this time. Though GM had been gradually laying off workers in the San Fernando Valley, there was not enough jobs at that time to help displaced workers get back into the job force. Not to mention other historical events that would ignite the powder keg inside the belly of Southern California – namely the Rodney King Riots.

Meanwhile, a new fourth generation Camaro was being developed. It was based on the previous generation, the concept was the advance the car's design towards a more futuristic look overall. The car was lower, with curved slopes leading down to a more aggressive front end. The large glass hatchback was retained for the coupe, as it retained a lot of the design cues once set back in 1970 with the wide B-pillar. The convertible was retained for the fourth generation, while developed from the onset with the coupe. The interior returned to more of a cockpit design, with some modifications – such as a lower center console.

With the introduction of the 1993 Chevrolet Camaro and Pontiac Firebird, production was started at the Saint-Therese, Quebec plant with the all-new body and F-Body architecture. Located northwest of Montreal, the suburban plant was charged to build this new version of the iconic American coupe in a free-trade environment for international consumption.

The fourth generation model ran for a long period of time – until 2002. During production, the fourth-generation Camaro saw performance increased to levels that matched contemporary big performance coupes. Engines were larger – including the new corporate 3.4 liter V6 and the venerable 5.7 liter small block V8. The V6 would be replaced by the equally venerable 3.8 liter Buick-developed V6 in due time. It seemed that way before the fourth-generation was developed, horsepower ratings finally scaled over the 200 mark. For 1995, no engine was introduced below 200 horsepower. The V8 was at 285 horsepower, which some of its competitors have already scaled the 300 horsepower wall a few years back. The power war was brewing and the Camaro was inching its way towards getting in the middle of it.

In 2002, it was all over. Chevrolet dropped the Camaro and GM closed the Saint-Therese plant. In effect, Chevrolet left the sports car market alone for Ford to play in. In essence, this was the end of the story.

Actually, no. Ford had something up their sleeve. At the 2004 North American International Auto Show, the next generation Mustang was unveiled on the D2C platform. The retro design brought customers back to 1965, knowing how much modern the Mustang will become. It was part of a movement throughout the 2000s – looking back at the past towards the present and future.

As with the original Mustang, the new retro model prompted GM into action. To execute their own retro Camaro, they enlisted a team that comprised with a designer from the Republic of Korea and a platform team from Australia. Holden’s Zeta platform was ripe for a shorter, two-door model that was concentrated with high performance and great handling. The first salvo was already in development – rear independent suspension. This was something never seen on any so-called "ponycar" ever.

GM brought out a concept in 2006, showing the path of the new Camaro. A convertible concept came a year later with additional teasers being brought out to engage with enthusiasts, whetting their appetite for a new Camaro. It got to the point where patience was growing thin among owners, enthusiasts and the automotive media in asking a simple question: "When are you going to build it?"

Meanwhile, DaimlerChrysler re-introduced the Dodge Challenger. Production began in 2007 for the 2008 model year for the LX platform-based coupe. If there was one thing that will provoke rival enthusiasts and owners, it was seeing the competition grow against their beloved car. 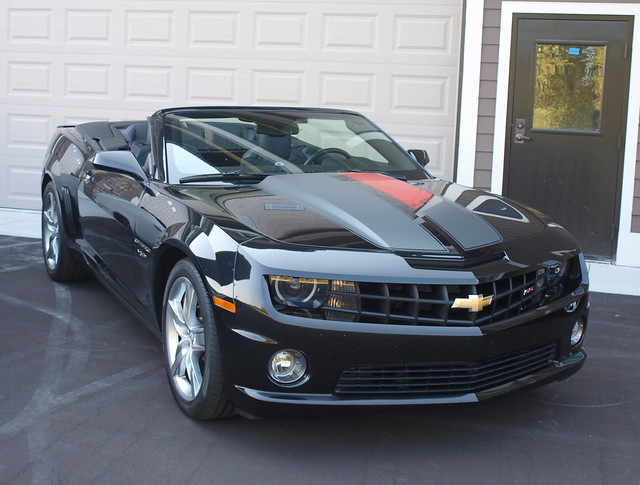 In the fall of 2009, all promises made by GM CEO Rick Wagoner were finally coming into play. The fifth generation Camaro built on Holden's Zeta platform was to start production at GM Canada's Oshawa complex. The production model looked true to the original concept. Yet, some enthusiasts and pundits wondered whether its arrival for the 2010 model year was too late to battle with the Mustang and Challenger.

The fifth generation went retro – back to the original model. Though it harkened back to 1967, there were plenty of details that spoke to the 1969 model year. The interior was designed as a paean to the first generation, also. The instrument cluster enclosures were a huge nod to 1967, as was the audio setup. High Feature 3.6 liter V6 power was standard, with the V8 enlarged to the 6.2 liter size. It would be the first Camaro to offer over 400 horsepower as a stock specification.

The big news was the inclusion of independent rear suspension. In a comparison with the Mustang and Challenger, one magazine favored the Camaro solely on this one engineering piece. They remarked on how much it changed the way it drove. Ponycars and muscle cars were never ones to take a curve with confidence. The Camaro changed the game by showing that they can take curves with superb tracking and feedback.

It took years after driving my former roommate's third generation Camaro before I touched another one. It came through a program that GM did to engage customers to the company in the Twin Cities. A 2011 Camaro SS convertible was that car. Though it was a short test drive around the dealership, that Camaro demonstrated a mixed bag of feedback. While it was powerful – my heart took a beating upon full acceleration – it was also short on a few things. The A-pillar was too raked for taller drivers to exit without moving their head towards the back of the door opening. The instrument panel was a bit contrived, and did not accommodate the incoming MyLink technology with touchscreen capabilities in the beginning. Switchgear was a bit of a mess earlier on, which was cleaned up by the mid-cycle refresh of 2013 – inclusive of the MyLink touchscreen.

The biggest complaint across the board was the weight. Compared to a Mustang, the Camaro was very heavy, despite having independent rear suspension and a brutish 6.2 liter V8 for the SS model. Though performance of the ZL1, Z/28 and 1LE models were greater than the standard 6.2 liter engine, their performance was still compounded by its curb weight.

All of this feedback was brought back to GM to look at the next Camaro. As it is now an important vehicle in Chevrolet's lineup, they wanted to make it better for today's discriminating drivers. One of the things GM did was to move the Camaro from the outgoing Zeta platform onto a newer architecture showing its mettle with two of Cadillac's products – the ATS and CTS. 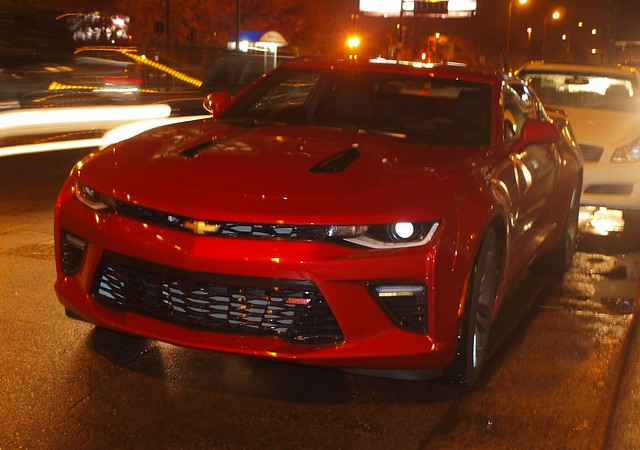 The Alpha platform was designed for advanced rear-wheel drive systems. It featured independent rear suspension and can accommodate advanced suspension technologies. It is also lighter. Chevrolet claims that the average weight loss for the Camaro was 200 pounds over the fifth generation models. Chevrolet planned on retaining the 6.2 liter V8 for the SS and the 3.6 liter V6 on most models, power went up for both. The V6 was reconstituted for more efficient operation, while yielding 335 horsepower. The V8 matched the Corvette in base performance output.

In what could be a controversial move, the Camaro was given a third engine. It would be the first four-cylinder Camaro since the third generation, but it would also be the first turbocharged engine in the car's history. Cadillac had been using a 2.0 liter turbocharged engine for the ATS and CTS before its arrival under the Camaro’s hood. Even with just under 300 horsepower, it was still powerful enough to work with even the most basic Camaro models.

Importantly is the Camaro's return to USA production. The sixth generation Camaro will also be made in a single facility. This time is at Lansing’s Grand River complex, where every Alpha platform car just happens to be built.

Like the car before it, the sixth generation Camaro was teased to owners, enthusiasts and the media for months on end. In May of 2015, the car was finally revealed. It was warmly received by everyone – media, enthusiasts, etc. The launch itself unfolded in steps, culminating with the first units arriving well after the start of the 2016 model year. It already earned its share of accolades – including Motor Trend's Car of The Year.

There is no secret that I am hankering for a drive in the latest Camaro. As I joined some of my colleagues welcoming them and sending them off on the Find New Roads tour in Minneapolis last year, I had a chance to explore the latest model. It just seems like they have hit the nail on the head. Though improved from the last generation, this Camaro had a mix of feels and influences from all previous iterations of it. It brought back memories of driving my former roommate’s third generation Z28, while it entices me to want to do illicit things in it.

Perhaps that is a sign that GM nailed this Camaro in time for its biggest celebration ever. In its fifty years of existence, the Chevrolet Camaro continues to be the "small animal that eats Mustangs." Except the game got larger. While it continues to go about it mission as GM’s entry in the muscle sports coupe segment, the Camaro will always engage with those who uphold its heritage – the owners and enthusiasts.

If you happen to be around for the Woodward Dream Cruise this year, join in the celebration Chevrolet is putting on for the Camaro's 50th anniversary. It will a celebration of a legacy built on one thing: Freedom.

To finish this story is to remember the place where most of these Camaros were built from the beginning. My birthplace of the San Fernando Valley will always be part of the Camaro story. The Camaro was a car made to be built in Van Nuys. It will always be a part of the Valley's story.