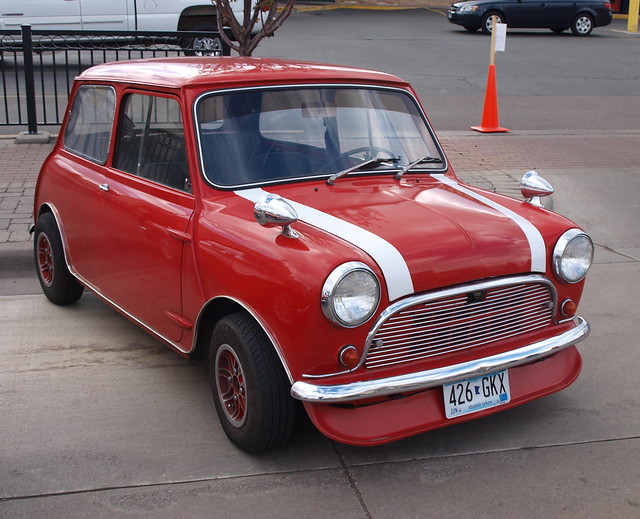 The innovation he created by switching the orientation of the engine, changing the traditional transmission to a transaxle and sending power to the front wheels was a magnificent idea! The Austin/Morris Mini was a gigantic leap in automotive design, creating more cabin space for everyone without having to negotiate the center drive hump. It also forced the weight of a vehicle towards the front for better traction, even in inclement conditions.

The Austin/Morris Mini did more for automotive engineering than expected. It showed the industry the way forward in terms of efficient car design and platform development. Though more suited for smaller automobiles, the transverse, front-drive format has become the norm for many automobiles today. Sometimes it is properly applied to a certain vehicle. But, sometimes, the execution might not be as superb as it was first marketed to the masses.

These vehicles in the latter category were not complete and utter failures. Rather, some of its history was mired in some execution problems that did not give it it's hero status as it was first envisioned by the manufacturer. Rather, any mention of these vehicles would induce some frowns, a few expletives, and possible vomiting.

What were these so-called dubious attempts at horning the engineering legacy of the original Mini? We might go too far from the source for our first automobile.

Americans may have been lucky to not to get what could be a "stretch" from the Mini. Though, we welcomed the immediate follow-up model from the British Motor Corporation – the car codenamed ADO16. We received it first as an MG and it would become the Austin America towards the end of its life under British Leyland. That car was not the problem since it was a wonderful car in its early stages – 1962, to be exact.

The next car off of the same platform would be a Mini gone too far. Its codename was ADO14. What began as a lookalike to the ADO16 simply stopped at the A-pillar. It was simply stretched…and, I do mean stretched…for a longer wheelbase, a fully-framed rear door and not much of a rear overhang. The BMC management deemed the car with its appropriate name – the Maxi.

The front-wheel-drive car kept its driveline in place ahead of the firewall. From there, the idea of the Maxi was to create a cabin space unlike a large sedan with a flat floor for more passenger space. The rear end was a hatchback, which made the rear seats to fold down for superb cargo space. The car simply dwarfed the ADO16 by plenty of inches.

The Maxi was introduced in 1969 to honor the Mini's 10th anniversary. Yet, the Maxi would be a curious machine that would also become a pawn of British Leyland's problems throughout the ensuing decade.

While the Maxi was becoming obsolete by BL's management, General Motors tried their hand on Sir Alec Issigonis' engineering advance. The company was no stranger to front-wheel drive cars – the Cadillac Eldorado and Oldsmobile Toronado were prime examples of their efforts. The platform they used was more to position their large V8 engines in the traditional position and create a “J” shaped transaxle unit to drive the front wheels.

What GM saw was the success of BL, Fiat, Volkswagen, and Renault in taking Sir Alec Issigonis' engineering ideas into actual and viable production models. So, sure, why not GM?

The solution was the new X-Body. Prior to 1979, the X-Car spawned up to five very popular models across an equal number of brands – including the first Cadillac Seville. The Chevrolet Nova lead the way through its final model year in 1979. However, the rear-drive platform was aging and GM took their direction to modernize their "compact" cars.

The 1980 X-Bodies was GM's first effort in transverse-mounted, front-drive cars. The first one out the gate was the Chevrolet Citation. This would become the most controversial automobile in the company's history up until that time. First of all, the traditional four-door sedan design was thrown out the window, in favor of a five-door hatchback body. It seemed that the emphasis on the Citation lineup was on two-door models – a notchback and a hatchback.

The rest of the X-Body lineup was a mixed bag. Pontiac offered the Phoenix, with its pointed front end and the lineup of a five-door hatchback and two-door sedan. Oldsmobile had the Omega, offering no hatchback models – but a two- and four-door sedan lineup. The same bodies were available for Buick's Skylark.

It all seemed just fine but considering this was GM's first such effort, one wondered whether the execution would fit the ambition. You had radios mounted vertically, bench seating on some models and a mixed bag of ergonomic anomalies.

From anomalies came the problems. First, there were the brakes. An engineering change yielded a lock-up problem with the rear brakes. After a number of accidents causing injuries and one death, the National Highway Traffic Safety Administration told GM to recall all of the X-Body cars for those brakes. The recall would affect 1.1 million 1980 model year units. In the end, the NHTSA received almost 4,300 complaints on the X-Body.

Funny thing, the larger A-Body cars that would be the bread-and-butter for GM into the 1990s never received any of flaws of the smaller front-drive cars. Lessons learned, perhaps?

There was one such transverse-mounted, front-drive automobile that would draw a debate about being featured in this article – Chrysler's K-Car.

The K-Car was supposed to be a Ford product to be carried through by Lee Iacocca in 1975. His boss, Henry Ford II, nixed the idea and eventually parted ways with Iacocca. When Chrysler was about to bankrupt in 1978, Iacocca was brought in to help save the company. Through Federally guaranteed loans, Iacocca was able to present the project he proposed to Ford a couple of years before.

In the fall of 1980, the first K-Cars arrived at Chrysler-Plymouth and Dodge showrooms. The Plymouth Reliant and Dodge Aries were simple box designs that offered simple specification, a choice of four-cylinder engines on a front-drive, transversely-mounted platform. Size-wise, they squared off with GM's X-Bodies – both became the reality of the new American car.

Where this becomes a controversy is what the K-Car platform would spawn afterward. This single platform produced all sorts of automobiles from the simple Aries/Reliant compact sedans and wagons to minivans, luxury sedans – even limousines. In all, Chrysler, Dodge, and Plymouth offered almost every car in their respective lineups from the same platform.

For 1982, Chrysler added the LeBaron, which was a luxury version of the Reliant/Aries car. Granted, it was offered in a convertible, the LeBaron looked like it added landau roofs, an entire front clip and leather seating to the basic K-car package. Dodge offered a similar product, called the 400. If you wanted a better looking Aries, this would be the car to get. It, too, had a convertible version.

The next year saw extended-wheelbase versions of the K-Car. Chrysler had the E-Class sedan, alongside the New Yorker and the Dodge 600. The same year saw the LeBaron-based Executive Sedan and Limousine. A Plymouth version would join the USA lineup by 1985 after a couple of years as a Canadian market product.

Where this history would favor the K-Car's mixed legacy is the minivan. For 1984, the Dodge Caravan and Plymouth Voyager singlehandedly enabled the final repayment of the government loans and a profit for Chrysler. This platform would continue to yield new products until 1995.

Perhaps the biggest head-scratching moment in the movement towards a front-drive universe came courtesy of GM – again. By 1984, it seemed that the company could do front-drive justice after the fixes began on the X-Bodies. One would have to point out that there are limitations to Sir Alec Issigonis' design. If you create a similar car with a much larger engine – a V8, for example – there may be a penalty in terms of handling and traction. One such penalty is torque steer, where the engine could overrule the directional balance of a car while fighting the steering system.

The new C-Body luxury sedans were seen as a challenge to this. While Buick and Oldsmobile stuck with their V6 engines, Cadillac went with transversely-mounted V8s for their Sedan/Coupe de Ville and Fleetwood models. Albeit it was the HT-4100 engine – a 4.1 liter V8 – the natural torque from the V8 was prime to torque steer on these new Cadillacs. Because the Seville and Eldorado followed a traditional engine location with their front-drive system, they were not prone to these torque steer issues.

That was not the only problem with these new front-drive Cadillacs. The styling fell short of the image of a Cadillac. It was seen as too plain and undramatic. There were hints of "tailfins" and its sheer size looked too compact – though they were clearly larger than the J-Body Cimarron.

A lack of a true rear axle saw some "sag" when the rear seat was occupied. Cadillac purists were appalled by this issue. That, plus the interior was pretty small for what was seen as the largest volume Cadillac in the lineup – 200,000 of them were sold in its first model year.

From that point, almost all Cadillacs went to a front-drive platform well into the 2000s. By then, a new generation of Cadillacs was built on a rear-drive format. Yet, Cadillac had a few good years until the brand began to fade thanks to increasing competition from Europe and Asia.

Cadillac was not the only luxury car brand that experienced its teething period with transversely-mounted, front drive automobiles. Ford already adopted a similar platform for the Fiesta and Escort since the 1970s. They would continue using this platform for their big breakthrough in 1986 – the Taurus. Alongside the Mercury Sable, the Taurus gave Ford a record first-year sale for this mid-sized sedan. The company also saw equity in the new platform.

Maybe it was not well-executed, but one wondered how the 1988 Lincoln Continental would work as a front-drive luxury car. It already had some auspicious feedback by the complaints levied against the V6 engine and its styling. Granted, it took some Lincoln aficionados to get their heads wrapped around the new Continental for the end of the 1980s. It was obvious that the new Continental was in response to the latest Cadillac.

If it sounds familiar, that might recall the disappointment of the newest Continental, when it was discovered that it would start as a front-drive, transverse-mounted engine format with the top engine being a twin-turbocharged V6. Based on experience, I much rather have this new Continental than the one back in 1988 for several reasons.

Ford tried hard to add equity to the Taurus/Sable platform by stretching it for the 1988 Continental. What it got was something of a befuddled design and the use of electronic everything. Back then, this was deemed acceptable, despite some questions about the kind of legacy it would leave behind with the name as esteemed as Continental.

Today, the engineering execution set forth by Sir Alec Issigonis is commonplace in this industry. The most popular cars, minivans and SUVs ride on the format of a transversely-mounted engine driving the front wheels. Advances have been made over the past 58 years towards controlling torque steer, adding more gears to transmissions, engineering all-wheel-drive systems that work with minimal manual operations, and designing automobiles around this platform that will be efficient, strong and can do their intended jobs competently. This format has since been expanded onto pickup trucks and work vans.

While this engineering format is considered normal in today's automobile, we have to recall those moments when it was put to the test. The ideal of trial-and-error costs millions for a manufacturer to gamble on. When they work, they work brilliantly. Yet, we must remember when they did not work as intended.