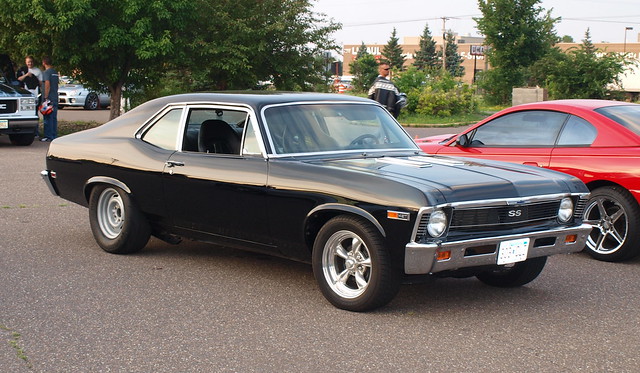 In 1975, Cadillac took an important step to reclaim lost sales of their larger, more iconic automobiles. They introduced the Seville.

The Seville represented a new kind of Cadillac – trim, small, but had every inch of Cadillac luxury inside and out. A 5.7-liter V8 powered this trim new Cadillac, even in the face of the residual effects of the OPEC Oil Crisis that threatened the existence of the 230-inch full-sized automobile.

Yet, the Seville did not sport the brand's iconic fins. They also integrated a grille that was seen as a mix of Mercedes-Benz and Rolls-Royce rather than a Cadillac. Not to mention, the interior volume seemed a bit tight for traditional Cadillac customers used to limousine-like rear seat space in their Devilles and Fleetwoods.

The one bit of information that was kept away from the general public laid deep below the upright roofline and leather-laden cabin. It was the frame itself.

In order to make the Seville, Cadillac looked to the entire General Motors lineup for inspiration. The best way to accomplish this Mercedes-Benz/BMW/Jaguar fighter was to use an existing platform that could be adjusted to meet Cadillac standards. They looked no further than the X-Body. The car was of unibody construction, yet Cadillac adopted the rear suspension, high-performance brakes, and key body components to frame their smaller Seville. The result was a Cadillac that foretold the immediate future of the brand and the downsizing of their large iconic Deville and Fleetwood a year later.

Officially, the Seville was not a part of the X-Body family. It was derived from it, but GM felt compelled to give Cadillac more credit by giving the Seville its own designation – the K-Body. The term "X-Special" could be seen as cheapening the expensive Seville to the level of the Chevrolet Nova.

In 1967, Chevrolet found success in the "compact" Chevy II. A new generation of the X-Body was introduced for the 1968 model year with sleeker looks that were modern and stylish. Yet, its looks still spoke to the role of the Nova – the entry-level product for Chevrolet and GM. While it shared many of the materials found on other Chevrolet models, it exuded handsome looks and offered a wide variety of options for every kind of consumer. The Super Sport model – the SS – packed a huge punch for a small car with its standard 350-cubic inch V8 and available 396-cubic inch V8. Muscle car enthusiasts extolled the virtues of the big power coming from the smaller Nova SS.

Which makes it interesting that the name "Nova" in Spanish meant "no go." Rather, "slowpoke." Ironically, muscle car enthusiasts can tell you to get the SS and the big V8 to find out otherwise. While you had up to 15 driveline choices in 1968 – ranging from a four-cylinder to those two small block V8s – most consumers selected either the 250-cubic inch inline six or a 307-cubic inch V8. It was doubtful you could call a small V8 a "slowpoke." 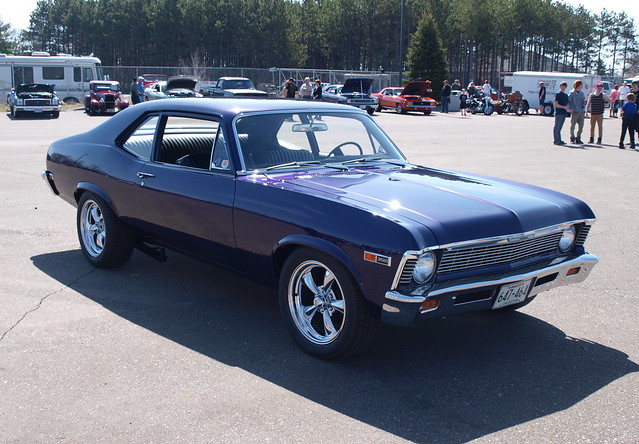 The X-Body Nova was hugely successful through 1971. Chevrolet's diversified portfolio of solid offerings was one reason the Nova found plenty of customers. Granted, it was not the best-selling car in the USA. However, the Nova served as an entry into a wide lineup of GM cars for those who do not need a lot of space and wanted something “thrifty” for commuting. Relatively, the Nova did not take up a lot of space. Although, customers might find imported cars that were smaller than the Nova more efficient and maneuverable – at slightly higher prices.

For 1971, GM went all-in on the small car business. To compete directly with those highly efficient and maneuverable imports, they developed the "subcompact" Chevrolet Vega. Meanwhile, other divisions wanted their own small car. The Vega was too new to be considered for sale at Pontiac, Buick, and Oldsmobile. Buick already had their own imports at their showrooms – the German Opel lineup. Pontiac dabbled in imports a decade back with a small number of Vauxhalls, and Holdens for their Hawaiian dealers.

The natural choice for the middle three GM divisions was to create their own versions of the Nova. To do so, they had to employ the dreaded method of badge engineering to accomplish this. It was less expensive to create a new front clip, re-arrange the rear taillights, install their own steering wheels, and put on distinctive badges here and there. Let's not forget about the wheel covers!

What Pontiac, Oldsmobile, and Buick customers got were slightly more expensive versions of the everyday Chevrolet Nova with their own look.

First, was the 1971 Pontiac Ventura II. It was a tradition that Canadian Pontiac dealers got rebadged versions of Chevrolets that did not fit into their own lineup. For Pontiac, the Nova became the Acadian. This did not happen stateside, as the lowest priced Pontiac was the intermediate Tempest. The Ventura II filled the small car gap for the Arrowhead Brand just in time for the impending oil crisis.

The Ventura II took on a four-slot grille within a different three-dimensional shape to the front clip. Split horizontal taillights took their place out back. The Pontiac arrowhead was prominent on a Tempest steering wheel where the Nova one would reside. Otherwise, the Ventura II looked like an upgraded Nova – right down to the engine offerings. Pontiac had the 250-cubic inch inline six and the 307-cubic inch V8 for 1971. 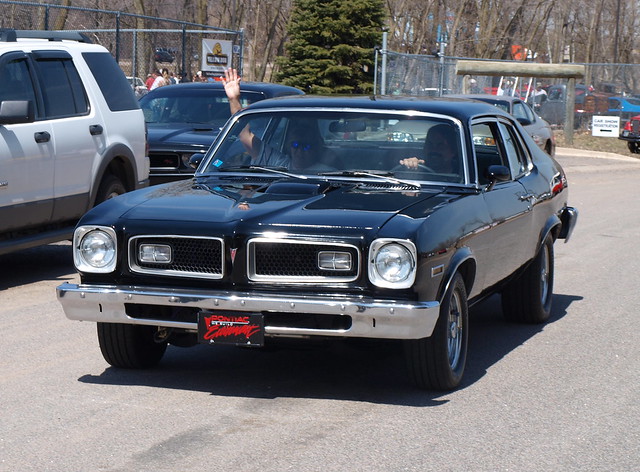 The 1973 model year signaled an update to the X-Body. Slightly larger bodies with improved trim and side profiles were joined by heavily revised front and rear clips. They included the mandated five-mile-per-hour bumper that stuck out with authority. These updates also spawned a hatchback model. The heavy hatch went front halfway down the rear clip to the apex of the roof. It was counterbalanced by two solid shocks on each side of the hatch. The hatchback coupes helped the cause of the X-Body.

Both the Chevrolet and Pontiac gained distinctive designs both front and back for 1973. Chevrolet went with an evolution of the full-length grille, while Pontiac went to the twin-kidney style found on the Firebird. Inside saw some updating in the instrument panel and seating. Yet, one could still not tell the Nova apart from the Ventura, except for badges and the steering wheel.

The revised body also ushered in two more versions of the X-Body. Oldsmobile introduced the Omega with its waterfall grille – almost like the new Colonnade A-Body Cutlass Supreme/Salon. Then, Buick came up with the Apollo. Some say that this was the most forgettable Buick up until that time. The front clip almost looked like the then-new Buick Century but seemed out of place with the large space above the grille. Still, both the Omega and Apollo adopted similar distinctive parts inside and even installed their own upholstery on the seats.

The problem with badge engineering is the lack of honest imagination in creating distinctive products on the same platform. This would continue to be the case during the lifecycle of the second-generation X-Body. It would the sole reason that Cadillac created the Seville as an entirely new design with some shared engineering. Sadly, the remaining four divisions of GM would follow suit when the X-Body underwent a major revision on the same platform for 1975.

The 1975 versions of the X-Body arrived with trimmer looks that appear to be a bit upmarket. The coupes/hatchbacks had slimmer pillars and more glass area than before. They also sported more contemporary looks with angled front and rear ends. You also saw more distinctions in the details between the Nova, Ventura, Omega, and the newly rechristened Buick Skylark. 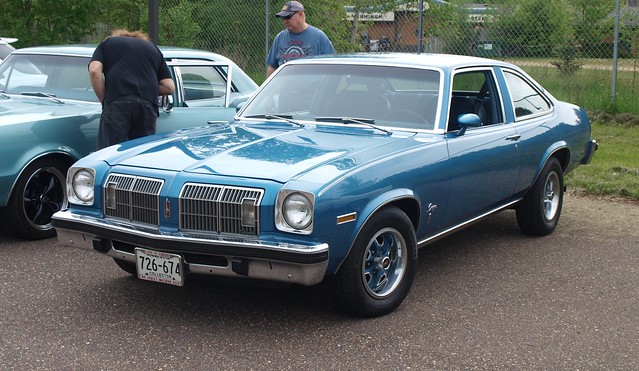 You also saw progress in terms of engines. Buick reintroduced their V6 engine for 1977, displacing 3.8-liters. This replaced the inline six from Chevrolet on everything – except for the Nova. You also saw a rationalization of V8s, with modern small block displacing 5.0-liters and 5.7-liters. Pontiac even introduced their "Iron Duke" 2.5-liter four-cylinder engine – as an option on the Ventura.

Some interesting things happened towards the end of the rear-drive X-Body lifecycle. In 1977, Pontiac introduced an upmarket version of the Ventura called the Phoenix. It sported an unusual front end that included a center part that included a big pad on the bumper. For the 1978 model year, the Phoenix replaced the Ventura and would become the nameplate for the new front-drive X-Body model for 1980.

Chevrolet introduced their own upmarket X-Body – the Concours. It featured an interior so plush it reminded some of the Monte Carlo and Caprice Classic. Yet, the Concours only lasted two model years: 1977 and 1978. It left Chevrolet with the Nova for one more short run for 1979. That was to make way for the 1980 front-drive Citation. The Citation's arrival killed off the Nova until the name was resurrected for the joint-venture car with Toyota in 1985.

Oldsmobile and Buick retained their nameplates for the front-drive X-Bodies. In the meantime, sales of the Omega and Skylark were being challenged by the downsized A-Body Cutlass and Century.

Meanwhile, Cadillac found success in their X-Body derived Seville. It was not the car that would spurn younger affluent customers away from their Mercedes-Benz S-Class, BMW 5- and 7-Series, Jaguar XJ, the newcomer Audi 5000, and the surging Volvo 264. It did invite imitators to join in this segment – the Lincoln Versailles and the Chrysler LeBaron. Because they were badge-engineered from mainstream models, they did not capture the sheer elegance and cache the Seville enjoyed. 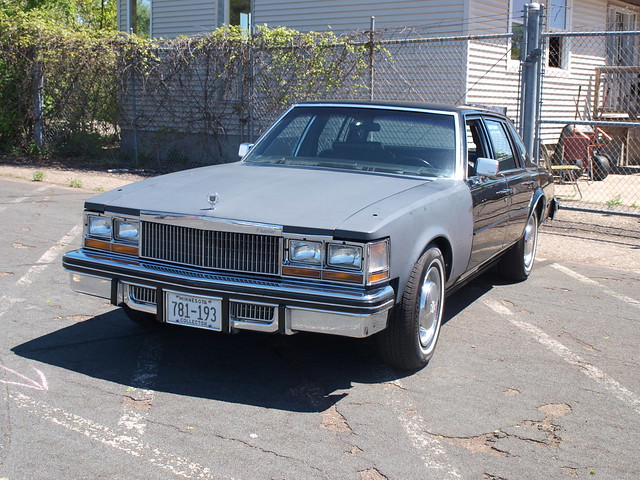 The Seville would continue into 1980 on a front-drive platform, but not on the new X-Body one. GM developed the upmarket E-Body platform that would employ a front-drive platform with the engine facing conventionally – similar to the Cadillac Eldorado and Oldsmobile Toronado. The Buick Riviera would be built from this platform, as well. It is worth noting that the Seville was the only four-door model built on this platform.

From the 1968 Chevrolet Nova came a significant shift in the execution of the "compact" car. While it sat at the bottom of the lineup, it also gave an entry into the world of the muscle car with the Super Sport. It was needed in the days of oil crises that the rest of the divisions at GM wanted one – except for Cadillac. What Cadillac did instead was create something that shared parts of the X-Body but had its own identity that refused to look like any of the other division's "compact" offerings.

No one should discount the impact of GM’s X-Body – all divisions included. Badge engineering aside, it served as an alternative to larger, fuel-guzzling cars that sat alongside these "compact" cars in their respective showrooms. They also were challenged by a growing number of imports that were more efficient than these rear-drive machines that still weighed more than their counterparts from Japan and Europe.

Still, they served a purpose when GM needed them the most.