Luxury is defined in many ways. It everyone followed the same definition of luxury; we would not have any way to differentiate one product from another – even if it is the same kind of product.

Twenty-five years ago, two Japanese automakers introduced new divisions to sell their idea of a luxury automobile. Toyota created Lexus, now one of the leading brands of premium automobiles in North America. Nissan was developing their own concept of the luxury automobile. It would be different in every way – from the design of its flagship to the dealership environment. Over time, this luxury brand went through many waves of success while trying to find a groove to satisfy owners, enthusiasts and future customers.

On November 8, 1989, Nissan opened the doors to a handful of dealerships under the brand name of Infiniti.

That moment brought more puzzled faces than praise. Prior to that date, Infiniti teased us on what to expect from its products. The advertising and marketing teams chose to use imagery of what luxury means to a Japanese entity than what to fully expect from a Japanese luxury automobile. Critics wondered why an opal stone had anything to do with a luxury car, let alone the Japanese idea of luxury. This was one a few images being touted with a brief message vaguely conveying the concept of Infiniti with cultural references and minimal mention of product. This strategy continued after the dealerships opened for business.

Behind the imagery was a flagship that broke many rules and stood out in a crowd. The Q45 was developed by Nissan to be a modern luxury car. The look of a luxury flagship had to be substantial, and the Lexus LS 400 followed suit with the Mercedes-Benz S-Class, BMW 7-Series, Audi A8 and Jaguar XJ of the era. Infiniti chose a sleeker look for the Q45 without a grille up front and groundbreaking details throughout. Critics did not warm to the look as one becoming of a flagship, but recognized the effort made to create a different kind of flagship by breaking design norms for the type of vehicle being presented.

The power also had to be substantial with a target of 250 horsepower from a V8 engine. While Lexus achieved this target, others either fell in line or added a V12 motor to blast through the benchmark. Infiniti raised the bar to 278 horsepower with its all-new 4.5liter V8. It was the first modern V8 made by Nissan and it made itself at home inside the Q45.

Interiors also had to be special – as one would point out in the S-Class and XJ. The LS 400 followed suit to the Mercedes, but critics pointed out the various switchgear and graphics shared by "lesser" Toyota models. BMW and Audi were as Teutonic as they came – austere, but of high quality, ergonomic and functional. The Q45's cabin followed neither of these conventions. They went with a cockpit-type of design with switches enhanced from Nissan’s then-current designs. The seats were ones never felt before – a free-form design with ample bolstering befitting of a sportier flagship sedan. Interior space match those of its competitors, something that would be the make-or-break point in the flagship segment of the new decade.

In all, the Q45 forged the definition of Infiniti. It would set the tone of the brand and provided a level of expectation of every product that came after it.

On first sight, I loved the Q45 – even more than the Lexus LS 400. It would be these design and engineering tenets that would draw me to this Infiniti, plus a whole lot more. The Q45 toyed with new automotive technologies, such as active suspension systems. Yet, it also exuded a sporty side that would require a tuned engine and an astronomical sticker price. The V8 alone was absolutely amazing. It was one of the first cars I ever drove that reacted quickly to my right foot on the accelerator – without resistance or exuding a wild streak. It simply took off – like a Rolls-Royce fan-jet engine. The quiet ride was just the finishing layer for the Q45. I thought that if anyone would pass this up for an S-Class or a 7-Series, they were making a serious mistake.

While the Q45 commanded the first 51 "contemplative" showrooms, the M30 was simply along for the ride. Nissan sent over its Japanese market luxury coupe, the Leopard, to join the Q45 as an entry level model. Initially, the M30 was offered as a coupe with a V6 engine, with a convertible joining the lineup later. Some considered the M30 an afterthought, but it only served as a placeholder for things to come.

One of the criticisms of Infiniti early on was the reliance on current Nissan products – whether they were sold in North America or not – only to rebadge them for sale at their dealerships. In some cases, these rebadged Nissans worked well for Infiniti. The small Primera sedan worked out very well as Infiniti's third model line, the G20. It introduced new buyers to the brand, even if prices started above $18,000 – in 1991.

In some cases, these models simply did not fool observant customers, despite sales trends and figures. The Nissan Maxima-based I30 sold quite well because of its price point, but many people could tell that this was simply a gussied-up Maxima in the end. When the SUV craze hit, The Nissan Pathfinder received a luxurious leather interior and nicer details all around to become the first QX – the QX4. Still, some argued that they would rather save the money and get true off-road capability with the Nissan-badged model.

When an original model arrived, it was true to the tenets of the brand at that very moment. The 1992 J30 had rear-wheel drive, a very shapely body with V6 power up front. It was a model needed to keep interest with the brand.

By the new millennium, Infiniti knew it had to create original products to keep buyers coming. The first was actually a Nissan Skyline back in Japan. Stateside, Infiniti introduced the 2003 G35. That moment struck a chord for consumers, as it introduced a new kind of premium sports sedan to fly in the face of the BMW 3-Series. It was rear-wheel drive, offered room for 4-5 people and plenty of luxury to go around. Yet, enthusiasts gave it their stamp of approval as a canvas for modifications to rival any BMW or Audi owner. The sedan would soon be joined by a coupe – something that was considered the spiritual replacement for the Nissan Z 2+2. If you looked underneath it – it was indeed a shared platform with then Z of its time.

The luxury crossover was in its infant stages. But, one would arrive to truly shake up the crowd – the FX. Following Infiniti design trends, though featuring a long hood and a tall rounded station wagon cabin, the 2003 FX would become something aspirational feeding right into an emerging segment for consumers.

As time went by, Infiniti began to look at bigger opportunities to grow beyond North America. Nissan enabled Infiniti to go on sale in Europe, China and in Japan. Being a global brand, Infiniti needed some direction to grow. In came Johan De Nysschen, a former Audi executive. The plan was already in motion to create an independent Infiniti from its Nissan parent. De Nysschen took further steps to do so. He facilitated the move of the brand to Hong Kong as its global headquarters. He also directed a nomenclature change for a more global identity. He did come under fire for these moves. Yet, he left Infiniti for Cadillac with his "legacy" intact.

Under De Nysschen's guidance, the Infiniti name showed up on a Formula One race car – the Red Bull car powered by Renault. The brand tie-in was due to the fact of the Renault Nissan alliance, which Infiniti is a part of. As Red Bull Racing and Sebastian Vettel began to rack up championships, the Infiniti name started to stand for something else other than just luxury cars.

Today, Infiniti is doing what they can to distinguish themselves in the luxury car field. That began with the Q50 sedan, the car that would have eventually replaced the second-generation G sedan. Instead, Infiniti decided to continue to sell the car – as the Q40. The G coupe and convertible were already christened the Q60. The sedan lineup culminates with the Q70, now available in two wheelbases.

Crossovers and SUVs have a four-vehicle lineup. The Q40-based QX50 is Infiniti's premium compact crossover entrant. The QX60 offers three-row luxury in a mid-sized package. It is one of two hybrid models in the Infiniti lineup – the Q70 being the other. The QX70 was known as the FX, now in its second generation. The formula has not changed in design, but the performance is astounding. At the top of the lineup is the big QX80 – a luxury SUV with three rows of seating and lavish luxury that would be the envy of any Cadillac Escalade or Lincoln Navigator owner.

Infiniti is looking to get into smaller vehicles – and rightfully so. Two concepts had been shown in the past couple of years – the Q30 and QX30 – pointing to expanding sales in Europe and China with its original market in the USA for consideration.

Some might say that the past 25 years of Infiniti had been quite the roller coaster ride. There were questions of brand sustainability and relevance. Yet, Infiniti sales are doing just fine. The revised models – the Q70 and QX80 – are building off a blueprint laid down by the Q50 towards the future of the brand and its eventual image and future.

My first encounter with Infiniti was an interested look at the new 1991 G20 sedan. I had a crazy idea of being an early adopter for the brand and the G20 was quite the lure. The reality was that it was too small for me and the price was a bit too high. Eventually, I wound up buying the 1991 Acura Integra RS coupe. No regrets…though Infiniti remained a curiosity in my mind.

So much that I did a test drive in a 1993 Q45t at an Infiniti dealer in Santa Clara, California. It was indeed love at first sight. It drove the way I would imagine a sports flagship would drive. The near flat cornering, the staggering power from the V8 engine and the smoothness of the transmission and ride confirmed my feelings about the Q45. It was indeed a great car – a personal benchmark for its class for years to come.

It would be a long time between Infinitis. I rented a FX35 and wondered what I did not get from this vehicle. My first review of an Infiniti was at the end of 2012 when a 2013 JX35 arrived. After two of the three-row mid-sized crossovers – the second being a 2014 QX60 Hybrid – an Infiniti came to rekindle the spirit of the brand. 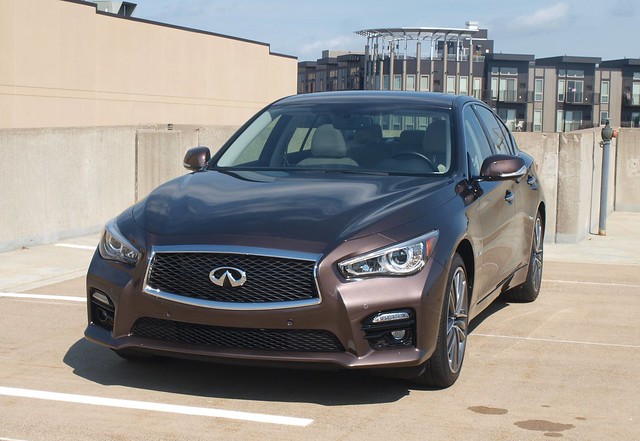 The 2014 Q50 struck my eye when it was unveiled at the 2013 North American International Auto Show in Detroit. Like everyone, I felt this was a good match against the Audi A4, BMW 3-Series, Mercedes-Benz C-Class, Lexus IS and Cadillac ATS…among others. It was slightly larger, but that was fine for better interior comfort. It exuded a lot of luxury, which felt appropriate and suitable in balance with its sportiness. The convincing factor for the Q50 was the drive. After 21 years, I concluded that Infiniti made a sedan that completely satisfied me. The word I would describe the Q50 was “balance” – and it certainly was!

That Q50 simply opened the door for me back to Infiniti. In turn, it became a finalist for Victory & Reseda’s Vehicle of The Year award. It confirms the one thing that I think about when covering a brand – it takes only one vehicle to define it for me. For enthusiasts, it will be the G sedan and coupe. Both vehicles signify one thing that holds true for Infiniti – the notion on how Nissan created an interpretation of luxury that continues today, 25 years on.