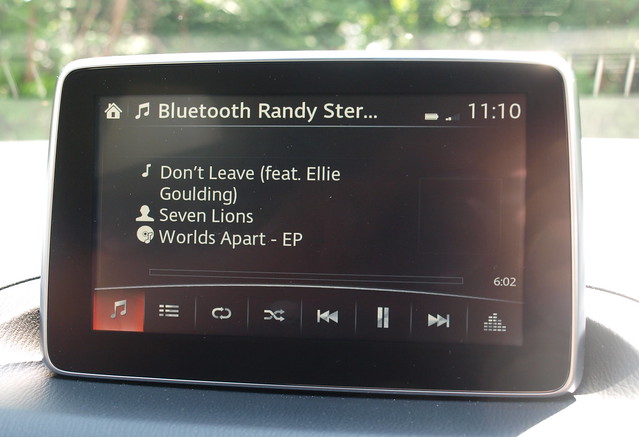 A piece of "infotainment." All Photos by Randy Stern

Just for trivial purposes, you might not be surprised that the word "infotainment" now appears in Merriam-Webster's dictionary. It also appears in the Oxford dictionary, as well.

Unfortunately, these definitions are not up to date. We know the word as pertaining to the combination of audio, navigation, other information and entertainment systems combined through a singular interface. We know some of the brand names it is sold as – MyFord Touch, SYNC, CUE, UConnect, Entune, HondaLink, NissanConnect, ConnectedDrive, UVO…and so forth.

It is what we used to call a radio.

How did we get to the point where the place you tuned to a station or play a piece of recorded music got so complicated? You have go back to the days when luxury was a snub against the worst economic conditions our country went through.

The only way the USA stayed connected as a nation during the Great Depression was through radio. The two major networks kept us informed and entertained when things seemed bleak. They brought us the end of the Hoover Administration and the beginning of FDR, while telling us who "The Shadow" was or entertained by the day's biggest personalities. Home radios varied in size, but none smaller than a "tombstone" desktop radio that was ubiquitous throughout the 1920s.

Radio and the automobile were raised on the 1920s – a time when people had money, were happy and fun was to be had. The Great Depression deprived many of a lot of things, forcing creativity upon those who could still do so. Yet, some ideas were developed just before the Stock Market Crash, which gave these ideas two directions: develop and produce or perish with the loss of financial foundation.

In 1928, the Galvin brothers of Chicago began working on a solution that would present the first in-car radio ever produced. Their company purchased a battery eliminator business that enabled them to develop a radio that could run on a non-battery source – i.e. household current or, possibly, a lower voltage automotive current. By 1930, the first in-car radio appeared – the Motorola 5T71. The cost was pretty expensive for its time – $110-130 each.

Other companies were not too far behind. Blaupunkt developed its first in-car radio in 1932, a year before Robert Bosch AG acquired the company. Crossley added their own radio into their own cars in the UK by 1933. These in-car radios were few and far between, but they would spark a second radio expansion as the Great Depression gave way to World War II.

The next step in developing in-car radio was the idea that you can seek and scan for stations your car antenna could grab. Presets only worked if you lived somewhere with more than a few radio stations inside a broadcast area. What if you traveled somewhere? Could you get the same station a hundred miles or so away? Ford's Philco division created a button called "Town and Country." Not to be confused with Chrysler's designation for their station wagons, the two buttons gave listeners a chance to lock in signals in-town and outside of it. I wonder if the "Country" button was able to lock in those "clear channel" stations you could get hundreds of miles away…

Then, the transistor took over. In theory, a transistor reduced the number of tubes needed to power the radio. In fact, transistors opened up a new kind of radio chassis – solid state construction. This eliminated tubes altogether and made the radio more compact in construction for more universal applications. 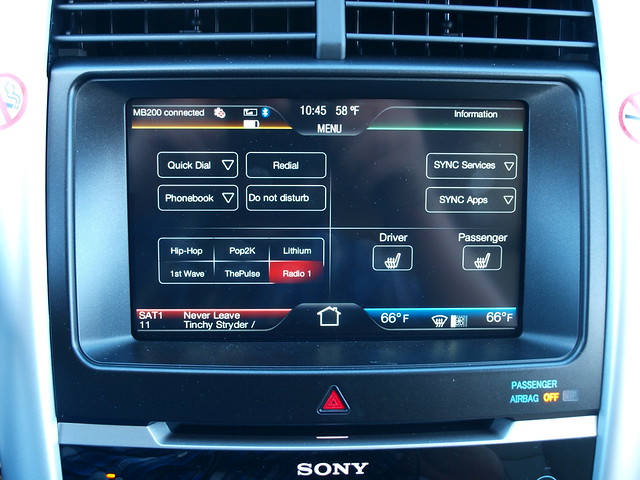 Radio was fine, as it began to expand to include localized programming over network broadcasting in the USA. The old radio networks transitioned over to television, leaving some affiliates wondering what kind of programming would work for radio. They also knew that it would be the automobile that would drive radio programming, with consideration to home and portable devices.

Somehow, in the USA, we want more things to play with inside our cars. A record player was installed in several Chrysler models in 1956 – the Highway Hi-Fi, co-developed by CBS. Great idea to play your 45RPM singles on a turntable, but what if you were driving on a bad piece of road? The results might not be too good.

Magnetic tape was beginning to appear in various formats. They brought in higher sound quality and fidelity than vinyl records. They were also more portable. First, the reel-to-reel became portable in the 1950s and, eventually, you saw them in cars by that time. Some were used for dictation instead of music playback. However, its use would lead to another portable magnetic tape solution.

Before the advent of the eight-track cartridge, Earl "Mad Man" Muntz began selling four-track tapes and players to supplant the in-car record player by 1962. The eight-track was an advance over the four-track, since they doubled up the tracks for stereophonic sound. The idea took off when Ford began offering the option of an integral eight-track player inside of their radio faceplates in 1965. While it was an advance, both the cartridges and players were not entirely reliable and fool proof. Not to mention the size of those tapes were not exactly "portable."

An even better solution was ahead. The compact cassette gained acceptance amongst audiophiles. Philips perfected the format in 1962, which lead to mass production two years later. However, the automotive world took a while to provide cassette consumers a place to play them. By the mid-1970s, the cassette player began to be integrated with the faceplate of audio systems on various cars. Some of the same issues seen with eight-track cartridges were showing up in cassette players.

Magnetic tape was starting to take a back seat to compact discs by the start of the 1990s. Since its inception a decade before, we demanded that we would play them in our vehicles. Our answer came with a few small problems. One of them was the lack of "suspension" in the early players that would have to absorb road imperfections – other the disc would skip and possibly be damaged. Today, disc players still exist, but mainly used for DVD navigation disc reading and movie playback for certain applications. 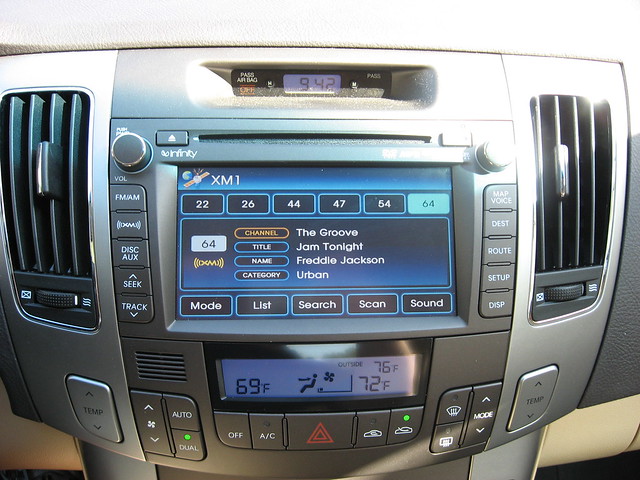 While we search for a more personalized in-car audio experience, radio was growing. In the USA, there was only one band to listen to – AM. The single band suited monaural sound and could reach long distances if the amount of a station's wattage was strong – about 50,000 watts. By 1961, FM joined the radio fray. The new band had its advantages. First, it was amended for stations to broadcast in stereo. It also had a higher fidelity in broadcast and reception. As automakers adapted to upgrading their audio systems for stereo receiving and playback, they also began to integrate the FM band onto their radio sets.

In my first car, there was a Delco AM-FM stereo with… No tape player of any kind. When I took over the car, the radio was pretty much done. I had desire to put in a better audio system because I did not know how long I would have it. In subsequent cars, I relied on what was already installed in the dash. Most did not work well. Others were adequate.

The dream of many car owners prior to the proliferation of modern infotainment systems was to create their own in-car audio masterpiece. Perhaps it is true today, except no one in 1990 ever thought of the insane systems installed in today’s modified vehicles. I had my new Acura Integra and the salesperson knew I had a much more discriminate ear beyond what was offered. I also wanted security to protect the car and audio system from being stolen.

For the Integra, I went across the highway to The Good Guys and designed a simple pull-out Sony digital AM/FM/Cassette head unit. It already had enough power to not want to add an amplifier. I finally settled on four speakers to replace the standard issue ones in the car – all four were coaxial Infinity speakers. My idea was to keep it simple, but to fill the Integra with enriched sound for all genres of music and broadcast.

This is perhaps why I talk about what the infotainment system offers in every review I do. I realize that I am not the only discriminate ear around and the deal maker/breaker could be the quality of audio and such. Honestly, if anyone bought a brand new car – how many of us truly have the money to upgrade the audio system after signing your life away?

Today's automobile has so much to offer even the most discriminate ear. AM and FM broadcast are simply not enough. Some people want HD Radio and SiriusXM. Some of us want to connect our smart phones so we can play our hundreds of music files through the six to perhaps tens of speakers throughout the cabin. We want to be safe and use our phones through the audio system so we could continue doing business or catch up with our families. Now, we have navigation systems, text read back and voice response, apps for more music options – even Facebook updates!

Back in my day, it used to be a special car that would receive a name brand speaker and amplifier set-up. General Motors and Nissan offered Bose systems since they carried a huge cache amongst audiophiles. Today, Bose has been joined by the likes of Bowers & Wilkins, Bang & Olufsen, Burmester, Mark Levinson, Lexicon and so forth. While infotainment offerings have stepped up in recent years, so has sound quality. We are no longer content with just four speakers. We must have dozens – with separate woofers, tweeters and amplifiers to drive them all.

How much more can we shove into our cars? It is hard to fathom to which levels you could add more to our infotainment systems before you rub against issues with distractive driving. Do you really want your Facebook timeline and/or your Twitter feed read back to you while you are driving? Do you really need to take that selfie so you could tie that into Foursquare or Instagram? How much more drama do you need in your life to have it come while you are stuck in traffic due to an accident a mile ahead?

Seriously, how much do you need social media for your drive before fate meets you head on?

Yes, there are limits as to how much infotainment you could equip in an automobile. To think that it was just 30 years ago that all we cared about was what radio station to play during your commute.

Perhaps we have gone too far with technology to forget what a luxury a radio was during the Great Depression. Perhaps, "only The Shadow knows…"