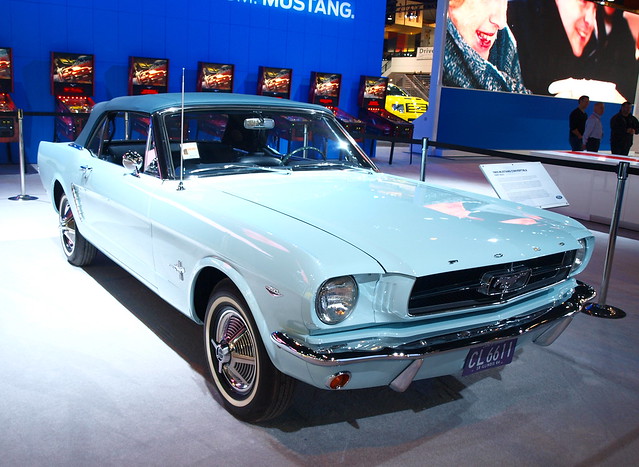 All Photo by Randy Stern

Happy 50th to the Ford Mustang!

Yes, Ford's ponycar is as old as me. It is younger by over a couple of months, but that is not what matters. What matters is the fact that one of the most significant debuts in North American automotive history continues to provide smiles to its enthusiasts today.

The Mustang began as a shortened wheelbase model from an existing platform – the Falcon. It was a genius move lead by teh rising star automotive executive of the time, Lee Iacocca. This formula continues through several generations until the newest one, albeit different platforms. Having lived long enough to see the evolution of the horse, the task of chronicling the highlights would be a heady task.

In this case, I need to take a personal view of the Mustang. Let me start from the beginning.

The Mustang is an easily recognizable car. Lee Iacocca spearheaded the project under his leadership to bring a different kind of sports car to Ford's North American lineup. The Falcon was a ready-made chassis for the coupe, though shortened to fit the two-door body. Though designed on the conservative side of things, there were tenets that made it stand out. The long hood/short deck design was emphasized, despite some overall lack of flamboyancy. The Mustang's details took care of the flair quotient – the grille shape and texture, sculptured headlight areas, hood and side shapes, and the rear end.

While the coupe and convertible defined the Mustang signature, it would be the fastback that would break the mold for good. Not many automakers could pull off a fastback – a slanted rear deck that would meet the rear end. Though it would be the body style of choice for high performance Mustangs, they were not entirely practical. You stowed luggage behind the rear seats and rear quarter visibility was non-existent. The rear glass also distorted outward visibility.

In all, the original Mustang was contemporary and ahead of its time – a feat that would define auto design for the rest of the 1960s.

Despite some of its flaws – light front end, live axle in the rear, lack of seatback height for tall drivers, and so forth – it was a huge success through 1965. It would become the biggest model introduction in Ford's history since the Model A. The company originally projected sales at about 100,000 for its first year. The 1964-1/2 models sold 121,000 units, while the 1965 model year added another 559,000 Mustangs delivered. That volume combined is about the number of F-Series pickups (F-150 and Super Duty combined) were sold in 2013.

The oldest Mustang I experienced was a 1968 hardtop with a 289 cubic inch V8, a three-speed automatic transmission. The year before, the Mustang’s shape was tweaked for a more dramatic design. This was the design I preferred over the original one. This shape truly defined the legend, and the detailing in the 1968 model made it even purer than ever. As much as it looked great, those flaws showed up. Despite the V8 up front, it felt as there was no weight up front to keep the Mustang on point. If you relaxed the steering wheel, it was drift to the side. This was not just related to early Mustangs, as I found the same issue with Thunderbirds from the 1980s.

My multiple drives in that 1968 Mustang – owned by the sister of a former colleague of mine in the Bay Area from the late 1980s – helped connect the dots in my quest towards automotive enthusiasm. There is no substitute for V8 power from that era – raw, no filter.

Carroll Shelby furthered the legend by adding his own twist on the Mustang. His special editions throughout most of the first generation cemented the pony's legacy with some of the fastest tunes ever sold on a showroom floor. A Shelby Mustang was as special as the Corvette of its time. These continue to be the most desirable Mustangs in the classic car market.

The first generation Mustang had another design tweak for 1969. A few safety additions help make the pony grow in several ways. You could hear enthusiasts lament that these were the last great Mustangs of the generation. Ford shoehorned larger V8s into the engine bay to create some of the most iconic variants of the breed. The original Boss 302 and the Mach I would endure the test of time and establish the legend for good.

By the end of the 1970 model year, all things came to question. The old chassis started to wear as the body grew to gigantic proportions. The soul of the 1964-1/2 would end up being watered down due to emissions controls, safety regulations and an impending oil crisis. The once iconic Mustang was simply a joke by 1973.

Then, came the Mustang II. Ford figured that it could extend the legend by putting it on the Pinto's subcompact platform, design it to emulate the Mustangs of the past, but emphasize fuel efficiency than high performance. The Mustang II introduced the first hatchback model to the legend, while adopting opera windows for the Ghia variant by 1975.

My brother and I had a 1974 Ghia coupe. Mom bought it for him first as his first car. I took it over when he bought the next car – a 1979 Mazda 626 coupe. In retrospect, this Mustang II was a joke. We had the Cologne V6 – the same 2.8liter that would be found on most European market Granadas and Consuls. The automatic transmission connected to the Cologne V6 had multiple recalls on it.

Though it was, well, adequate, one point to be made was with the color scheme. In 1970s fashion, our Ghia coupe had a lime green body with an avocado vinyl roof. The same two colors were found on the vinyl upholstery inside. Despite the return of these shades of green, it was at best embarrassing to be seen in as its age began to show before being offed for chump change.

The Mustang II could have destroyed the breed, but calls by its loyalists to save it came with one condition – add a V8 option. A Windsor 302 V8 saved the Mustang II. It would also serve as an opening for the Fox Platform Mustangs to come.

For 1979, the Mustang took on a more global design. The Fox Platform was introduced in the Fairmont sedan as a lighter, more flexible frame designed for maximum efficiency and durability. Keeping the 5.0liter V8 was a good thing, as it stood as the main attraction to the lineup. The Fox Mustangs reintroduced the convertible after a decade’s absence. Through its long run, the Mustang balanced brand identity with global design tenets – something of a mix that was both welcomed and spurned.

Mustang enthusiasts wanted a contemporary car that spoke to their heritage. They wanted the horse back up front and other elements that spoke Mustang. What they got for 1994 was a new shape formed on the Fox Platform. It was not bad – probably a step in the right direction with nods to distinctive elements towards a Mustang identity. Power was up. The first 300 horsepower Mustang since the original Shelby era arrived by 1995 in the Cobra R. By the end of the fourth generation's run, V8 power scaled to 390 horsepower.

As the Fox Platform was about to be shelved for good, Ford began to consider what a Mustang would look like if it reverted back to its original fastback roots. What we saw in 2003 at the North American International Auto Show was the 1965 fastback reborn. This was at the tail end of the retro design movement, where several automakers recreated cars from their past onto modern platforms.

There was a twist to the fifth generation Mustang, as it arrived in showrooms in 2004. Production shifted from the old Dearborn plant downriver to Flat Rock – a shared production facility with Mazda. The new platform was made exclusively for the Mustang, though it was originally created for a series of high end products sold by Ford, Lincoln and Jaguar. With its retro design set for a fastback coupe and a convertible, Ford hoped for the same magic to return to the brand.

The retro Mustang was a great idea, but the times have changed. Fewer enthusiasts have any time or want of a solid axle in the rear. You can shoehorn a 600-plus horsepower V8 under the hood – as they did with the GT500 model – but today's enthusiast wants handling, proper tracking, great braking and steering systems. Driving dynamics is what gets today's enthusiasts going. Retro design is fine, but not when there were plenty of beauties worth driving around for the same money.

Knowing all of this, I have not driven any Mustang since the 1974 II Ghia and the 1968 hardtop. Missed opportunities would be the best excuse, but deep down inside, I felt that I would be disappointed if I took on a Fox Platform Mustang or the retro ones. Live axles, light front ends…those were experienced before in older Mustangs. Why be disappointed after driving some of its contemporaries?

Today's Chevrolet Camaro has the best driving dynamics of the three modern ponycars. Sure, you bang your head on the roof of the coupe (hence why you drive the convertible instead), but the Camaro tracks through corners like any other coupe of its kind. To me, the Dodge Challenger is most user friendly of the trio. One would argue about its solid rear axle, but one drive in a Chally is a special one. It exudes performance from the moment you sit down and fire up the engine – any engine.

Right now, we are at the apex of another generation of Mustang. It has a global look, while sharing some iconography with the past. The idea of the new Mustang is to sell this everywhere on the planet. Mustangs used to be sold in many countries and have been exported to places where it never touched its soil before. The idea of globalizing an American icon is nothing new, but possibly worth a Q&A session.

Perhaps I will drive the sixth generation Mustang. Will it be a GT with the Coyote 5.0liter V8? Or will it be the one with the EcoBoost four-cylinder?

The legacy of a half-century of Mustangs continues to dazzle the imagination of its enthusiasts. The echoes of exhaust rumbles from the first few years of the breed remind us how Ford sought out to change the way we see the coupe. Through its trials and tribulations, the Mustang still gathers its faithful in a frenzy of ecstasy.

To Ford fans, this is no mere car. It is spirit guide. And, yes, I get it.