There is a thing called "professional obligation." It is born from being a part of a group of professionals that are joined by a common purpose and passion for the work we do.

For the third year in a row, I made the trek to Elkhart Lake, Wisconsin for the annual Midwest Automotive Media Association Spring Rally. This time away is focused on a day-and-a-half program that engages journalists with manufacturer representatives to try vehicles that we have not been exposed to – or to re-acquaint with for more impressions. It centers on one of the best road courses in American motorsport, Road America.

To explain this event the best way possible – consider there will be 100 journalist members of MAMA at Road America given the license to drive an equal amount of automobiles. Day one consists of track education, time on Road America's challenging track or to drive out in the countryside near the venue. Certain vehicles are designated for track use, while others will be used on the countryside. The next half-day adds off-roading and autocrossing to the menu, along with judging for MAMA's Family Car of The Year.

In-between are social opportunities and presentation by specific manufacturers on their latest products. Normally, a surprise or two would show up in one of these events. Fiat Chrysler Automobiles did not disappoint with a dinner featuring the Dodge Viper SRT ACR and a breakfast with the 2016 Fiat 500X. Subaru kicked off our first day with a marketing presentation, along with the updated 2016 WRX and WRX STI.

If you followed one of my previous adventures to Road America over the past few years, I try to do something different every time I attend this event. Last year, I accomplished my first lap on any motorsport course by feeling Road America’s nuances in a 2014 Buick Regal GS AWD. This year…I better get this story started…

My third year began with clouds and sub-50 degree weather. In contrast to the last two years, there was no rain. On the other hand, there was no sun. I roomed with writer Chad Kirchner in a familiar two-bedroom suite that the Osthoff has made immaculate with its extraordinary space. I helped that it had Wi-Fi to accomplish the things I needed to do for my outlets and clients.

There were changes this year due to prior incidents on the track. A mandatory track briefing by two of the greatest instructors I know, optional helmets and a second person positioned inside the most powerful cars on the track. As someone who has not had a lot of track experience, these changes were welcomed. 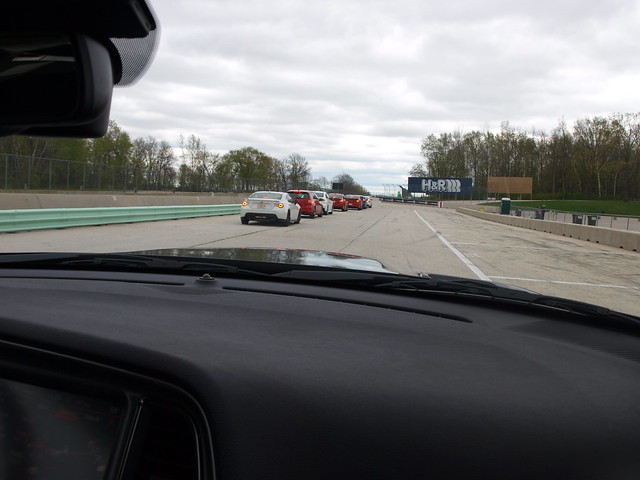 I partook in a ride-along with a professional driver with Fiat Chrysler Automobiles in a 2015 Dodge Challenger SRT Hellcat. Though it would be easier to have driven it, I wanted to find out how the car would be able to manage such a great course. The result was mixed. Certainly there was too much power to put down on this track and it was a bit wooly on some corners, the Hellcat is a ball of astonishing velocity. Because of the power, there was a visceral force that is unleashed when the red key is in use. I respect the Hellcat now, having been on board one. For me, I would stick to the "392" 6.4liter SRT engine to work the upper limits of performance. I am not the only one that has arrived at this conclusion.

Most of my experiences on Day One have been in the countryside, where I found a varying array of driving experiences. I began the morning with a rude awakening – a 2015 BMW M4 convertible. The methodology in choosing the M4 was unclear. It was a BMW – and I might as well drive it. So I did. First, I was uncomfortable with the seats in the M4. Then, it was the complexity of this machine. I remember the last question to the folks at BMW was "where is Park in this thing?" This was not out of ignorance, but rather of confusion in the workings of the M Double-clutch transmission with Drivelogic. The answer came when I turned off the car – it is simply engaged in Park. Granted, it was massively visceral as it delivered the power and the tuned exhaust sound. This is another car I respect for what it is.

The next car to drive in the countryside would be my first Chevrolet Sonic. The 2015 RS five-door hatch was presented in a subcompact sporty package that is best dressed in Dragon Green Metallic. Having the turbocharged 1.4liter engine under the hood, connected to a six-speed automatic, it was a spunky machine. Though accelerator action provided some minor squirreling up front, the Sonic is quite fun to run. For a subcompact, it a solidly built car. Yet, it felt OK. Not great, but definitely not the worst car sold in America.

There are a number of my friends that own Mitsubishi Lancer Evolutions. These cars represent the apex of power in a compact sedan, aided by a superb all-wheel drive system and a turbocharged engine that delivers a wall of power. A white 2015 MR model was there to drive. This would be the model with the Twin-clutch transmission, which I am familiar with form the Ralliart I drove a couple of years ago. With a rep from Mitsubishi along for the ride, I showed her a trick on these transmissions when driving at low speeds – flip to paddle to second and let it go. It certainly worked in the Evo. It also opened up to an enjoyable driving experience serving as a swan song for the Evo. I know it was my first; it certainly would be the last.

In the same vein of outgoing models was a drive in the 2015 Jaguar XF. The one thing I love about the XF is the 3.0liter supercharged V6. Most boosted engines were designed to feel like an engine with more cylinders. Jaguar got this right with a V8-like wall of performance that seems effortless even under heavy throttle. Though it was a bit comfortable – not as sumptuous as its larger XJ brother – the last of the first-generation XFs was an enjoyable place to pilot this mid-sized premium sedan. I would certainly hope that the next XF takes what it began and elevate it to the next level. It certainly has a tough act to follow. 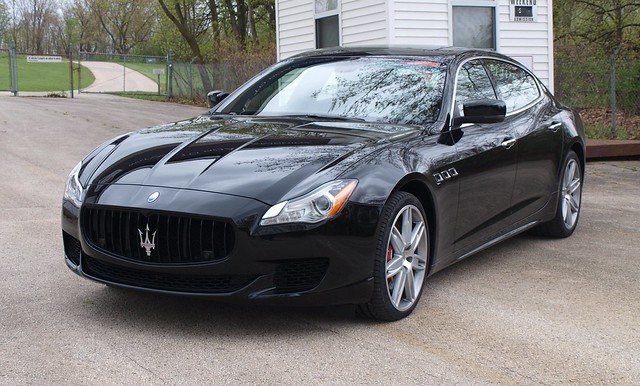 Having driven the 2015 Maserati Quattroporte S Q4 in the winter, I was invited by the North American brand’s team to try out the GTS model. The difference between the two models is simple: No all-wheel drive and a 523 horsepower, 3.8liter twin-turbocharged V8. This is an incredible engine that delivers extremely quick bursts from the throttle. As it represents a level of luxury I am familiar with in the previous turn in the Quattroporte, a couple of quality issues were detected. Annoying rattles could have spoiled the experience, but the engine kept things entertaining. Who said Maseratis were perfect machines? Yet, some luxury car buyers would dismiss the Quattroporte GTS because of these issues. It happens.

On the other hand, luxury was indeed welcomed in the 2015 Volkswagen Touareg. Having never driven the big SUV, it certainly became a treat. The Touareg was big, but very comfortable. Not to mention, it is quite premium in feel. Aside from the outdated infotainment system, the Touareg provided a nice, comfortable way to get around the countryside. While it yields a lack of takers, one should take another look at the Touareg.

In the mix of superlatives was the all-new 2015 Ford Edge. My interest in the new mid-sized two-row crossover was piqued as Ford made a commitment to a selection of utilities to fit a wide variety of families. In all, the Edge does a great for growing families of 4-5 where the kids would easily grow into the back seat space. Cargo space is quite generous, as was access to it. The Sport model with the 2.7liter EcoBoost twin-turbocharged V6 showed a rather sporty side to this crossover. The seats were comfortable and well-bolstered, the low cowl made visibility excellent and the performance from the EcoBoost was fantastic. If they removed the two trim creases on the hood, the Edge would be the perfect vehicle in its class. I cannot wait to bring this in for review.

However, if one car would mark Day One above all – it would be the 2016 Cadillac ATS-V. Having driven the M4 convertible earlier, I came into the ATS-V without any preconceptions of it. It helped to take this approach, since it really won me over. The front clip truly transformed the standard ATS into something that reveals the wolf behind the sheep's clothing. The interior was a hodgepodge of familiar good and "meh," but the Recaro seats were the saving grace of the ATS-V's cabin. They transformed the ATS-V into a serious performance sedan. However, by switching through the drive modes and leathering the 464-horsepower 3.6liter twin-turbocharged engine, all became true. It is a civilized sports sedan with a hammer under the hood. There is nothing hardcore about the ATS-V, but it absolutely fine. Do you need to drive a jackhammer? If not, the ATS-V does the same thing with exceptional balance.

There was actually one special treat in store that first day. How often do you get to drive a police car? It is the dream of a child to get behind the wheel of one. We are fascinated with them. Considering the current climate of tension in this country, the invitation to take one along the countryside was one I accepted as a fun way to relieve some stress I had coming into this event. 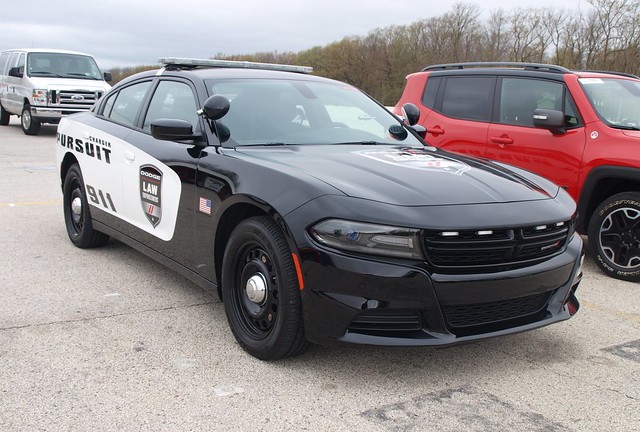 The 2015 Dodge Charger Pursuit is perhaps the best public safety solution for sedans. The version I drove had the model-exclusive combination of a 5.7liter HEMI V8, a six-speed automatic transmission and all-wheel drive. This is only available in the Pursuit. That alone made the Charger a really fun car to drive. However, the purpose-built suspension yielded a balance between the Charger I know and love and the Charger that is necessary for public safety agencies to use every day. That alone made the Charger Pursuit a great way to break the stress of the grind of this work.

I have driven a lot of things in my life. While I have yet to drive some of the most important vehicles offered today, I could happily take off "police car" from my bucket list. It was good to be a kid again – albeit more adult in approach to driving it. Just saying that for the record…

There is a Day Two to all of this. Though it was colder than the day before, there were still more cars to tackle for an important task. Stay tuned for what else came my way at the 2015 MAMA Spring Rally.