It has been a year since my first Midwest Automotive Media Association Spring Rally.

A lot has changed over the course of that year. I now write for three outlets. Instead of going to an unfulfilling day job and scrounge for time to do the work I love, I commute daily to an editor's chair at my newest outlet – CarSoup.com. In a quick amount of time, my presence has grown with – hopefully – my ego kept in check.

However, my arrival at Road America in Elkhart Lake, Wisconsin was tempered. The increased role within my profession comes with a mixed bag of stuff. While it is tempting to simply drive vehicles I would never get a chance to experience, photograph and write about them, I have been lumped with a lot of new responsibilities to tend to. At this point, I would rather leave those issues alone and offline for the time being.

Still, I felt stressed as I inched the 2014 Subaru XV Crosstrek Hybrid Touring from my office in Bloomington, Minnesota to The Osthoff Resort via Madison. Somehow, Madison is a magnet since it is where this career began to take root. I always try to unwind amid familiar surroundings before taking on the privileges membership in a media guild provides. My mobile device now has e-mail from my editor's position, which provided no relief from the stress I felt from the office. I understand that, yes, with a larger role in this business come greater responsibility. There is no time to skate away from there.

Still, I always want to do my best in everything I do. There are still unknowns to tackle while I settle into my new role. These clouded what I came to accomplish at Road America. However, I managed to accomplish them the best way I could. 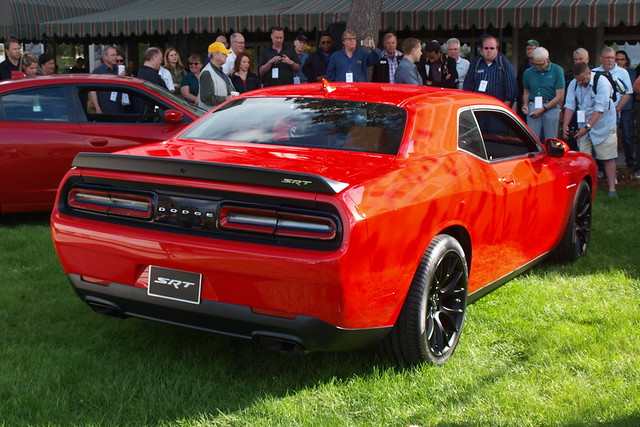 Breakfast With A Hellcat
Sometimes, the Spring Rally will get a surprise or two from the manufacturers. Though already announced, this surprise was a three-dimensional version of what was paraded across social media for two days.

Dodge brand CEO Tim Kuniskis arrived on the lawn in front of Lola’s Restaurant at The Osthoff and beckon us closer to a red draped Challenger. On each flank of the "mystery" car are the 2015 versions of the Charger R/T and Challenger Scat Pack. I already knew what it was. We were very excited to actually put a finger on it.

The 2015 Dodge Challenger SRT is one angry mother. The grille will be different from the 1971-esque standard Challies, a bolder mesh in black. The inboard second front light has been replaced with more air induction. The hood has a massive scoop and a duet of air extractors.

It under that new hood is what makes the Challenger SRT. The new 6.2liter HEMI V8 has a supercharger inducing somewhere over 600 horsepower. It comes with an appropriate name: Hellcat. It is one of those names that will supersede any official name you give it. This engine will come with the new eight-speed automatic that could manage all of that power. For those who rather clutch than anything, you can still get a six-speed manual gearbox to row with the Hellcat. Drive modes will be part of the SRT package – including Track, of course.

It is not every day when you could wake up, have breakfast with about 100 or so folks and hear the roar of a Hellcat. It is also not every day you get to see a brand new piece of machinery before the enthusiasts could even get close to one. In particular, getting to view one in the flesh that would entertain the heart of this readership. 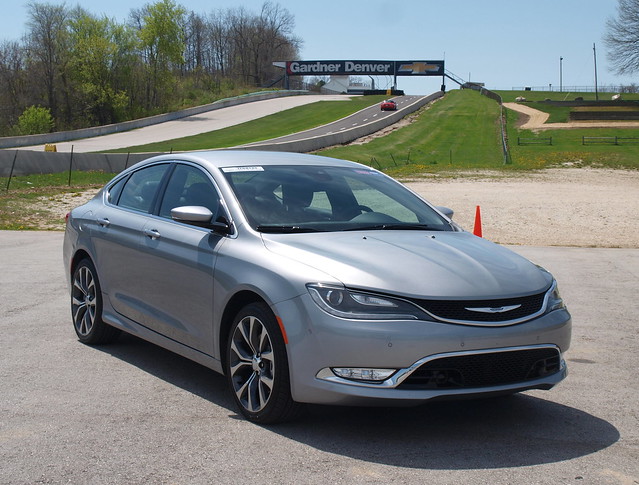 Driving Those Dreams
My main assignment for one of my outlets was to get impressions of the 2015 Chrysler 200. It was important to focus on this car since it garnered the largest buzz this year amongst new car debuts and extends the Chrysler story for what could be the biggest challenge for the company.

Knowing I will be doing more work with this car, my first impression has been extremely positive. I truly love the new 200. It is a massive leap forward for Fiat Chrysler Automobile to compete in the biggest segment in North America. I cannot wait to get this in for a full review on Twin Cities turf.

Aside from the 200, there were other significant vehicles that needed to be experienced. Having never driven a Land Rover/Range Rover product in my life, I jumped in the Range Rover Evoque. Being the company's compact premium crossover, I always wanted to know whether it backed up its claims. It is nice – soft ride, supple, some roll in the turns, roomy up front and plenty of power from its turbocharged four-cylinder.

One thing came to mind as I drove the Evoque. There is an impression that if I drove any Land Rover/Range Rover product, there should be something special in the way it goes about its business. It is what you expect from a luxury product. The Evoque somehow does not feel that way. It just feels like any other compact crossover/SUV – perhaps with a few embellishments and tech pieces. It is a good vehicle, nonetheless.

If there was one surprise amongst the vehicles driven was the 2015 Chevrolet Tahoe. Normally, General Motors' big SUV would be seen as a huge, hulking and linear conveyance. A brief in the drive of a Cadillac Escalade a few years ago confirmed these notions, despite some enhancements over the Chevrolet and GMC large SUVs. The new Tahoe is different with more concentration on design, interior accommodations and integration and driving dynamics that feel more like a wagon than a truck.

The surprise was that it drove much better than that. The LTZ sampler I captained had Magnetic Ride Control – something you find on the likes of the Cadillac CTS, Chevrolet Corvette Stingray and Buick Regal GS. That alone made a huge difference towards making the Tahoe a better driver than before. Add cylinder deactivation, a smooth automatic transmission, more comfortable seating, better ergonomics and a solid transition between body and frame, then you have the recipe for excellence. I am glad to have experienced the Tahoe – it is much better than I expected. 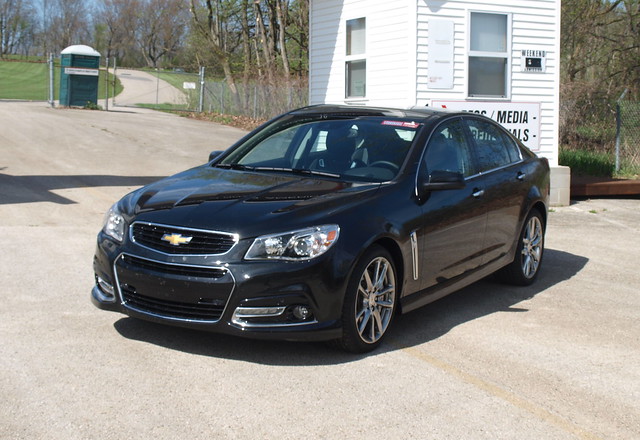 There were more important vehicles to try out, however. Perhaps at the top of my list was the Holden VF Commodore SS – also known as the Chevrolet SS. If there was any vehicle that truly exceeded my expectations, it was this one. The fact that it had a 6.2liter V8 with 415 horsepower, a six-speed automatic and very comfortable sports seats helped greatly. What I did not expect was how quiet and poised the SS truly is. Yes, it balanced a solid ride without extreme firmness, but it handled without lean or roll in the corners. It also accomplished cornering at any speed without putting the fear of a higher power onto you.

Granted, it is a fuel drinker. If you had an SS – who cares? You do not drive it to be sustainable or If it were my $45,000-plus in the bank and I wanted a performance sedan that I would go and carve up an Interstate or a twisty road somewhere – I would pick the Chevrolet SS.

But, there was one vehicle that truly blew my mind into shrapnel. For just under $165,000, I may have found my weapon for world domination. With 577 horsepower from its twin-turbocharged 5.5liter V8, the Mercedes-Benz S 63 AMG absolutely defies reason. Seriously, you really do not need that kind of power to enjoy the S-Class. It does not hurt, either.

It is beyond just that engine. The S-Class denotes a premier experience amongst flagship sedans. AMG is performance beyond limits – an experience onto itself. The combination of the two can reverse the aging process. For example, I was no longer a responsible, 50-year-old automotive writer/editor/photographer with a mature outlook on the subject. I was 30 again. I had enough power under my foot to not care if I got pulled over by a trooper. The S 63 AMG facilitated fearlessness. Yet, I am reminded that with power comes responsibility – exactly as Mercedes-Benz intended.

Other vehicles driven at the Spring Rally were the 2015 Hyundai Genesis, 2015 Kia K900, 2014 Jeep Grand Cherokee Limited with the EcoDiesel, 2015 Honda Fit, and 2014 MINI Cooper S. I would rather save the bandwidth than go into each one of these vehicles in depth. You should see some of these vehicles in for review in the months to come.

…and there is one more tale to tell! I will leave the suspense right here for the next posting…

Cover photo by Jiyan Cadiz/Fiat Chrysler Automobile for Victory & Reseda. All other photos by Randy Stern