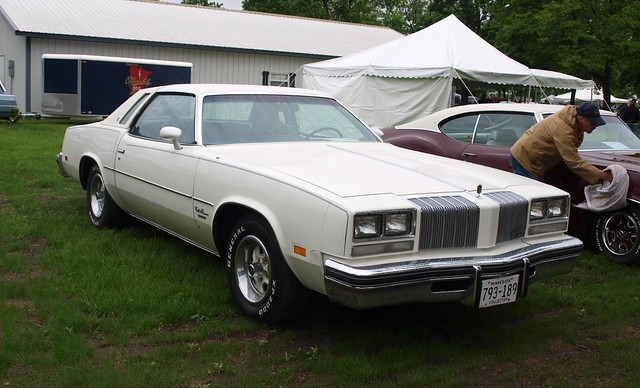 If there were one thing I learned from my second 10,000 Lakes Concours d'Elegance, it would be the necessity of preserving automotive history.

I was talking to one of the participants from the Concours in regards to being a collector and the responsibility in ownership of these special vehicles. He basically wanted original cars – originally equipped and specified to the best possible way – with low mileage. From there, his collection reflected this ideal with some stunning examples.

It got me thinking…if I had a deep pool of funds, a garage condo and the time to search out vehicles for a collection, what would I get?

1973-77 OLDSMOBILE CUTLASS SUPREME/SALON/BUICK REGAL: General Motors' "Colonnade" styling befitted the mid-sized A-Body cars after its most successful run in the previous guise. The muscle car era is over. Yet, GM enticed me to explore some of its most successful products through the OPEC Oil Crisis. For once, Oldsmobile had the best selling passenger car in the USA and there were not enough Cutlasses to keep customers happy. The preferable model would be the Salon 4-door sedan, which ran from 1973 to 1976, equipped with the Oldsmobile 350 cubic inch V8 and three-speed Turbo Hydra-matic transmission. The Salon had a "European" feel with high-back bucket seats and sumptuous appointments. Salons came in smaller numbers than the more popular Supreme coupe. During this period, they did make Supreme sedans and the Supreme Brougham was introduced by 1976. They key piece to look for is the percentage of original equipment and any problems that would be minimized by basic maintenance instead of a full restoration job. If there are no Oldsmobile Cutlasses available from this era, I would look for a Buick Regal instead. The driveline and requirements would be the same, though Buick made their own 350 V8. The idea is to have a luxurious A-Body from the mid-1970s that would keep observers guessing.

1970 DATSUN 240Z: Perhaps the one sports car of my childhood worth owning – and driving. In my case, I would find one with an automatic transmission connected to its in-line six-cylinder mill. My main requirement is that the mechanicals are in good running order. If work is needed, it would be to ensure a reliable run and to tune everything up from the brakes, suspension to the steering and driveline. The body and interior should be in good condition – preferably with the correct badging, original bumpers and upholstery. Tires would be upgraded with modern radials at the correct size of original spec. Perhaps I would invest in a second set of wheels and tires for track days – close to original spec for vintage racing weekends. The idea is to get one worth showing at varying car events – non-judged, of course. Heck, it would be perfect for summer road trips.

1970-71 PLYMOUTH BARRACUDA/DODGE CHALLENGER: This one is for the Mopar side of me. My twist on the Barracuda/Challenger piece is to not look for one of the more valuable models – such as R/Ts, 'Cudas, AARs, etc. A base model is exactly what I am looking for – with one of the LA V8s (318-360 cubic-inch) and a TorqueFlite automatic. The reason for finding a base model is the low buy-in for these models, current availability and the simplicity in restoration and maintenance. Though it appears there are more Challengers available than Barracudas to meet this requirement. For those of you who might not be aware of this, the Dodge Challenger was seen as a longer, more substantial model amongst the two Chrysler E-Bodies positioned against the Mercury Cougar of the time. The Barracuda was the direct competitor to the Ford Mustang, Chevrolet Camaro and Pontiac Firebird. However, history has since lumped the Dodge and Plymouth together. I would be happy with either car.

1973-80 MERCEDES-BENZ S-CLASS: The W116 defined the S-Class as the finest luxury sedan above all. In my childhood, they simply forged their path as the one car for anyone with a large income and established career. As someone who almost gone one, I know how valuable these W116s are. I also know that there will be more than a few out there. My focus would be with fuel injected models, using Bosch's reliable system. Back then, Mercedes-Benz employed four-speed automatics on both six and eight cylinder gas models, as well as the five-cylinder turbocharged diesels. My focus will be on the gas models – six-cylinders, first. However, the 450SEL is actually more reliable, despite its fuel economy. The 6.9 is a rare breed and will not be pursued. They key for a W116 S-Class is the level of originality, condition of the body, interior and mechanicals. Any restoration or maintenance issues would be served through resources via the local Mercedes-Benz club. This would serve as an occasional tourer or show car.

1969-76 BMW 2002: If one car made an impact on an entire segment of car – this one is it. These New Class 02 Series sedans defined BMW for good. They just look like fun – and they are. The driveline choice is simple: 1996cc four-cylinder engine with a three-speed automatic. Everything else depends on body, interior and mechanical condition – preferably a good one. The 2002 is seen similarly to the 240Z as part-show car, part-vintage/track racer. This would mean two sets of radial tires – the second for track use. In original condition, the better condition would mean how much of a restoration job it would take to get it to good running condition. This might even mean doing road trips within reasonable distances. You have to milk these babies sometimes.

1976-81 VOLKSWAGEN SCIROCCO/1976-83 RABBIT/1980-91 CABRIOLET: The purists would rather have me own a "Sedan" (Beetle, Bug, etc,) or "Kombi" (Bus, Camper, etc.), why would I choose a Karmann-bodied and built front-drive, water-cooled coupe than the more obvious Golf? Connection to my teenage years is the obvious answer. The trick is to find a Scirocco with an automatic. This is a rare combination, but a challenge nonetheless. Again, the check through would be for body, interior and mechanical condition. I do not expect to find a good condition one in its original state, as a lot of Sciroccos went through a series of modifications. The same goes with the US market Mk I Golf we called the Rabbit. I have been warned that Westmoreland-built Rabbits were made of cheaper materials and had softer suspensions than the global Golf. This was rectified by 1983, when the first US-built GTIs went on sale in this country. Then, there is the Cabriolet. The obvious one to get is a white-on-white-on-white version with an automatic. I would prefer a less obvious color scheme, if available. No matter which one to get – screw the purists!

1967 CHEVROLET IMPALA: Another one from my childhood – and I would need to be very specific about this one. When someone points out a '67 Impala – it is the SS. They are not only the most valuable models of the lineup, but the most available. What our family owned was a standard Impala Sports Coupe – the fastback body. It had a 327 cubic inch V8, a Turbo Hydramatic transmission and a few upgrades outside and in. It was white with a beautiful blue vinyl interior. It would be great if I could find one in that exact color scheme, but any color would so. The body type and standard model designation are requirements, as long as it is original.

1972 OLDSMOBILE NINETY-EIGHT: If you know me very well, you would expect this one. The point is to not find the exact first car I ever had, but something close. The basic engine specs would be the same as my car – a 455 cubic inch Rocket V8 with an EGR robbing its power, a three-speed Turbo Hydra-matic transmission and a 227-inch long body. The model we had was the Luxury Sedan – a pillarless hardtop sedan with a good chunk of upgraded standard equipment. In finding one, I would look for one with power windows, power door locks and a power front seat – hopefully all working. At this point, color would be negotiable, as long as the body is in good shape. The point of getting this car in shape is to do so with either minimal work or to trust a restoration place to get it to working condition. Would I need to modify it further? If I can get the air conditioning and radio working along with the rest of the car, I would be happy.