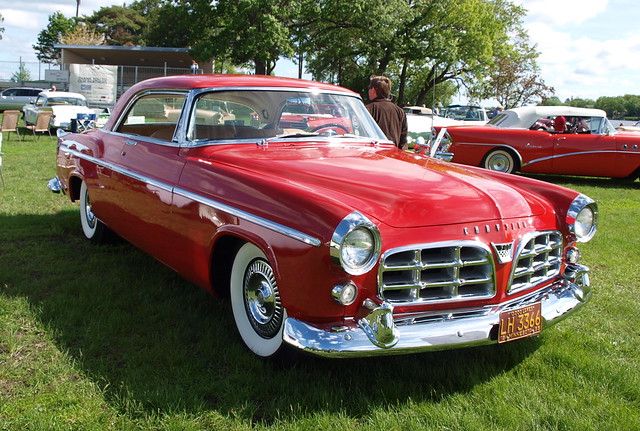 Yes, I am Moparian. You know the story – it's been told many times on this blog. Why should I epxlain this further?

Because I am a Moparian (by decisions made by a family member that I shall not get into without going into rant mode), it does not mean I am exclusive to the products made by the combined forces of Fiat Chrysler Automobiles. I cover every brand sold in the USA for all of my outlets. No questions asked.

However, this blog gives me more freedom to express deeper thoughts and provide some leeway for subject matter. I am also blessed with a readership that is loyal – including some die-hard fellow Moparians and staff at FCA.

It is for those great readers that I dedicate this My Favorites list. However, I have to start somewhere…sixty years back.

1955 CHRYSLER 300-C: The original American luxury performance coupe…and convertible. Some say that the idea of the muscle car came from this. To accomplish this, they took the frame from the Windsor, body parts from the New Yorker and Imperial, put in a 300 horsepower HEMI V8 under its hood and found the balance between luxury and performance. They raced it, too. Won a few trophies to show that such a car is not only possible on the track, but on the road as well. The result was a triumph for Chrysler. The Forward Look served as a major leap for the company's fortunes. The 300-C became a legend. It still remains influential and inspirational as it was sixty years ago.

1965 PLYMOUTH SATELLITE: The point about the car was how it came to be. Up until the fall of 1964, Chrysler thought: If they just scaled down their most popular sedans to a fraction of what the other two Detroit automakers are building, they would be better automobiles. It was a charming idea, but the not right one for the mid-1960s. Instead, they had to build bigger cars for Dodge, Plymouth and Chrysler (Imperial kept on building luxobarges through this experiment). On the same platforms as the mainstream ‘64s was a brand new mid-size model: The Dodge Coronet and the Plymouth Belvedere. The latter spawned the Satellite. From there, the entire mid-size market exploded with some of the most memorable automobiles built in North America. Remember the Road Runner? You can thank the original Satellite for that! On a personal level, I remember our family owning a white ’65 Satellite hardtop with a black vinyl roof and black vinyl interior. It was my first lesson in automobiles – vinyl burns in the heat! Who has memories at 18 months old?

1970-74 PLYMOUTH BARRACUDA/DODGE CHALLENGER: Admittedly, I've never driven one. It would be a dream to do so. These weren’t just mere Valiants and Darts with gorgeous bodies – these were purebred ponycars. The shape itself is iconic – an interpretation of the Coke-bottle styling prevalent of the period. Inside was unlike any Mopar machine with cockpit styling around the driver and comfortable bucket seats to sink into. Where the magic happens is under the hood with an array of motors set to stir the soul – from a basic four-barrel 318 to the 426 Hemi. Having one around in my childhood was just the start of this love affair with the E-Body. Though our family had the Barracuda, I love both the Plymouth and the Dodge equally. They truly were stunning in their time.

1985-1989 CHRYSLER LEBARON GTS: Let me take you back a few years. Lee Iacocca was brought into Chrysler at its most dire moment. First came Federal Loan Guarantees from the Carter Administration. Then came an idea: create an inexpensive single front-wheel-drive platform that could spawn many models over the course of a decade. Now, build as many vehicles off this platform to pay off the loans and turn a profit! You get the idea. Granted, we often think of the minivan as the most successful of the K-Platform movement under Iacocca. Left we forget some brilliant ideas that were spawned from this durable framework. One was a hatchback sedan that hauled in many different ways. In fact, I considered it the perfect platform to drop Chrysler’s own 2.2litre turbocharged four-banger. Before we even discuss quality and the lack of vision based on the K-Platform, understand this: Chrysler wanted to expand the notion of the American car to fit the marketplace. Honestly, the LeBaron GTS was one fun machine! Close behind was a bevy of K-Platform coupes that almost equaled the enjoyment of the GTS hatchback: The Dodge Daytona, the Chrysler Laser and the Chrysler LeBaron coupe.

1993-1997 EAGLE VISION: How long could you build a single durable platform? Chrysler found out that hard way that creativity could only go so far. What do you do for an encore? Try this: "Cab Forward." Instead of creating another platform to build every vehicle ion the lineup on, Chrysler decided to concentrate of optimizing passenger space utilizing the latest in front-drive technology. The LH platform began the revolution by creating the best full-sized sedans in the company’s history since 1969. The best of the original LH triplets: The Eagle Vision. The Chrysler Concorde was for the near-luxury crowd. The Dodge Intrepid – not exactly mainstream, but families loved them. The Vision was for enthusiasts. This was the car for the LeBaron GTS (and Dodge Lancer Turbo) owner to step up and grab the road. It was where the 3.5litre V6 began, connected to a four-speed automatic that was right for the time. It drove superbly – and looked the part. The Vision met its fate as Chrysler pared down brands to concentrate on a core product strategy through the millennium. Yet, the Vision was the last in a line of Nash, Hudson, Rambler and AMC sedans that challenged the notion of what a mainstream automobile was. It also planted a seed for future Chryslers geared towards the discriminating enthusiast.

1995-1999 DODGE/PLYMOUTH NEON: The economy of scale of the 1990s stated that compacts would serve a purpose to be a starter car and nothing more. That was beginning to change, thanks to dual overhead camshafts and four-valves per cylinder on top of four-cylinder engines. More power and technology meant that compacts had a fighting chance to be considered by more motorists. The problem was space and design. There was limited room for four and compacts tended to be a bit stodgy looking. Chrysler came up with a solution – use the principles of Cab Forward design to create the most original and different car in its class. Its difference translated in a roomy, comfortable cabin, a simple shape and a fun-to-drive demeanor. All on e had to say to it was "hi."

2006-2010 DODGE CHARGER: It's a tough decision, but one made easier on how you view the world. If you love luxury, bling and all the trappings of spit-elegance, the Chrysler 300 is your machine. But, if your mind is stuck in 1969 and you love the idea of reliving your youth with a mix of modern amenities, you're exactly like me. You're a Dodge Charger person. Obviously, the concept of a four-door Charger never sat well with Mopar purists. In today’s world, it makes sense. Think of the Charger's soul – circa 1970 – recontextualized in a large sedan with more than enough space for four big-boned folks, their luggage and a choice of mills to take them towards the sunset. Even better, there’s a bunch of stuff from a Mercedes-Benz parts bin, ranging from suspension components to a five-speed automatic transmission, which makes the Charger a bit more poised than its elders. I have to admit that I have a soft spot for the Charger – especially when the occasion calls for one.

2010-2020 RAM 1500 (CLASSIC): Pickup trucks are the backbone of the automotive industry. Yet, I never vibed off of them until 2011. They were big, did not ride well, a bit of a handful to drive and sucked up a lot of gas. It was not until my first Ram in 2012 when I found happiness in a truck. That feeling stuck. It was not about the idea of a pickup, but of the complete package of the Ram. The revision in 2013 created a much bigger leap in the evolution of the pickup – rear coil springs, automatic ride height and the integration of more TFT instrumentation. It just seemed that every Ram I drove represented a good truck that delighted overall – not just for one aspect. Consumers are now realizing this. It is one of the fastest growing brands in the automotive industry. All of this confirms one thing – if I had to get a truck, this would be it. End of discussion.

2013-2016 DODGE DART: The Neon was a distant memory, blundered by the Caliber. For Chrysler to compete in the compact class, they need to step it up. With help from now-partner Fiat, they crafted a compact that had some swagger, great driving dynamics and a host of technology enhanced above all others. It turned out to be distinctive, concentrated and dynamic. However, the Dart is very significant for me, as it was the first story I truly followed from the day it appeared on a Powerpoint presentation in 2009. It took on a life of its own – including a name from the past. I was there to be the first (social) media people to drive it. I had three in for evaluation since. The Dart goes beyond just a story, but a point where I can see FCA leveraging it towards the promise of the upcoming mid-cycle refresh…and beyond.

2015- DODGE CHARGER/CHALLENGER: Though they should not be joined at the hip, but they are. The LX Platform was on its second generation and it was time for a mid-cycle refresh. One stuck with minor grille and taillight changes on the outside, while doing more extensive work inside and under the hood. The other took its refresh further with new front and rear ends, interior improvements and the same under hood tweaks. What binds these two cars together is one engine – Hellcat. By adding a 707-horsepower supercharged HEMI V8 under each of these hoods elevated both cars to the cosmos. Though joined at the hip by a platform, a series of engines and heritage nameplates, they are two different cars. The Challenger is a heavy muscle car with a wallop and an exhaust that is pure Rock 'N Roll. The Charger is more practical, but equally exciting to drive. This is a tough one, since they both equally do the same thing for me – they bring me back to where it all began in this automotive life.