Over the years in my professional life, I have bore witness to a few exciting new things. These are otherwise known as "unveilings."

These are big auto show moments – sometimes not at auto shows, but mostly they are. They gather the media around in hopes of pulling off a surprise. These days of electronic communication, the surprise sometimes gets ruined by leaks and advance media information sent via e-mail. All we had to do was to show up for the spectacle.

Sometimes, these are great spectacles, considering what was to be unveiled. These are the ones I enjoyed the most – especially being there live for the event. They could be concepts towards a production vehicle, or the long-awaited production car. They could also be refreshes that will set it apart from the crowd.

In this rendition of My Faves, I will spell out the unveilings I attended, as well as some that were downright awesome that I was never able to attend. You might say that these were some spectacles that were worth watching – live or by video.

2014 CHEVROLET CORVETTE – 2013 NORTH AMERICAN INTERNATIONAL AUTO SHOW, DETROIT: The night before Media Days, I was part of an exclusive party among some repurposed industrial ruins in Detroit. The cold rain did not dampen the mood, but you did expect a party when it came down to the seventh-generation Corvette. General Motors' executive Mark Reuss took the stage with excitement and awe of the upcoming unveiling. A video ensued with the entire team involved building upon what this sports car was going to be. Then, in came a guitarist – more like an air guitarist with a backing track. Still, the mood was right for the C7 to show up on stage – a red Stingray coupe. How did we like it? We're still talking about it today.

2015 CHRYSLER 300 – 2014 LOS ANGELES AUTO SHOW: Brand CEO Al Gardner began by tying in the 300’s legacy over its 60-year history. It seemed appropriate, as the once benchmark for performance cars was primed for a new lease on life. Gardner also tied in the 2005 300 – the one that put Ralph Gilles on the map as a design executive. These two benchmarks led to a thoroughly designed and well executed mid-cycle refresh of the 300. The emphasis was on defining the Chrysler brand by positioning in the mainstream, while maintaining the 300’s overall target in the full-sized sedan segment. Gardner also showed he had the pulse of the brand right in his hands.

2013 GMC ACADIA – 2012 CHICAGO AUTO SHOW: The Lambda crossover lineup was in the midst of mid-cycle refreshes. It was GMC’s turn with the Acadia. It turned out to be a very good presser, showing both the SLT and the Denali versions, along with an emphasis on a design language for future brand products. The one part that kept us talking was the rear end. Since Saturn was eliminated due to GM’s bankruptcy proceedings, somehow, they kept the bumper skin, rear quarter panels and tailgate from the Outlook – the ringed planet’s version of the Lambda. Oh, trust us, we noticed! And, it absolutely worked! 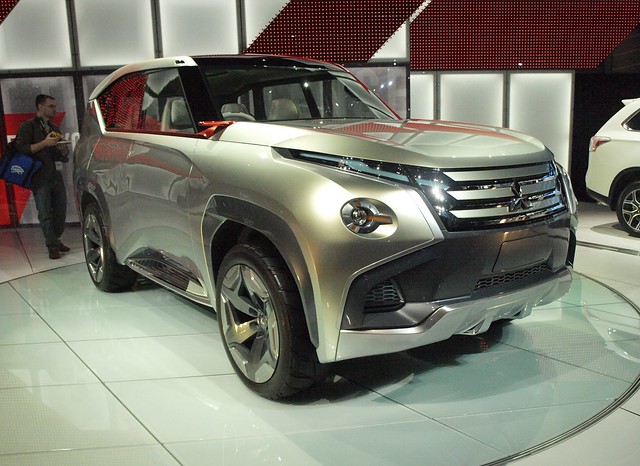 MITSUBISHI GC-PHEV CONCEPT – 2015 CHICAGO AUTO SHOW: Before the concept SUV was unveiled, one point was made by Don Swearingen, Mitsubishi Motors North America's Executive Vice President. He reminded us that Mitsubishi is "here to stay" in North America. After this pronouncement came two Stig-like creatures – doing the "robot!" Now, what the heck are these two race driver-looking dancers showing up for an unveiling? We know what it might be – a mid-sized SUV not unlike the Montero of the past. After they roboted their way on the stage, the concept was unveiled. It was full of promise – from the look to the plug-in hybrid technology. It was worth the show.

2005 MERCURY MONTEGO – 2004 CHICAGO AUTO SHOW: You never forget your first presser. This one was replete with civic pride and Bill Ford beaming about a Mercury. Since the Montego was to be built at the Torrence Avenue plant, he had Mayor Bill Daley there for the announcement of additional jobs for building the third model at that plant – including the Ford Five Hundred and Freestyle. Though it would be safe to say that the Montego was the better looking of the three – in my humble opinion.

2012 DODGE CHARGER SRT8 – 2011 CHICAGO AUTO SHOW: Gilles was the brand CEO at the time and he was in the midst of sparking a performance revolution across Chrysler. This would soon lead to the splitting of SRT into its own brand, with Gilles in charge. However, Gilles wanted to show off where the brand is going. First, he glowed about the Man Van – the 2011 Dodge Grand Caravan R/T. That was a good segue to the beast that would roll onto the stage – the Charger SRT8. Gilles did the one thing you never see any executive do – kiss the car. That alone was worth being there.

1993 JEEP GRAND CHEROKEE – 1992 NORTH AMERICAN INTERNATIONAL AUTO SHOW, DETROIT: This was way before I became a credentialed auto scribe, but this is perhaps the most memorable. This was recently brought up, thanks to a discussion with former Chrysler PR person and author Jason Vines. He was part of the team that masterminded this and other press conference stunts in the 1990s. Back then, Chrysler wanted to outdo everyone in the business. They certainly did. They took the new Grand Cherokee and crashed it through a window at Cobo Hall. That certainly got everyone's attention. Over the years, the company had tried other stunts on other unveilings – a cattle drive for the 1994 Dodge Ram pickup up to driving over "rocks" for the 2014 Jeep Cherokee.