Hallow's Eve is coming. The only time of year where everyone gets to dress up in costumes and, in the words of Peter Gabriel, "play silly games."

One such silly game is to let the kids play "trick or treat" by going door-to-door and get candy. Granted, this is fun when you're a child, but shall I discuss the consequences of eating candy? Rather, the consequences of doing this are not-so-safe neighborhoods? Shall I evoke Bushwick Bill’s vignette in the Geto Boys' video classic "Mind Playing Tricks On Me?"

For adults, it means costume parties and zombie bar crawls. It is also the gayest celebration in the LGBT community (I say that with love, fellow readers). From "Rocky Horror" to "Ru Paul's Drag Race," we are inspired to dress like it’s a party to mask who we really are. Add alcohol, mix and let the taxicabs, Uber and Lyft take care of the rest…

You can tell I'm not down with Halloween.

I know you do. So, here is a list of the Scariest Automobiles ever created. They could be customized for movie and television purposes. Rather, they could star themselves. Or, they can be downright scary – period.

"THE MUNSTER KOACH": George Barris was hired by the producers of the television show "The Munsters" to create a macabre, but comedic car that fit the show's black-and-white motif. Barris Kustoms created a very long car, based on the Ford Model T. In fact, they used three of them to meld into a 133-inch long frame. The grille was framed in brass, while the interior was done in "blood red." Power came from a Ford 289 cubic-inch V8 that was once slated for an AC Cobra. Not only was this thing scary – it was scary fast! For Fred Gwynne, Yvonne De Carlo, Al Lewis, and their fellow cast members – this was a creepy machine to roll in.

"CHRISTINE": By rule, Plymouths were not supposed to kill people. However, this red-and-white two-tone 1958 Plymouth Fury was a possessed machine set to do exactly that. First, it possesses Arnie, the formerly awkward teenager who bought the car and began restoring it. Then, it possesses itself to go after the bullies. However, it could not be killed – even when Arnie's friends tried to rescue him from his own car. Gotta love John Carpenter's mind when it comes to films like this. There are two film cars left, by the way.

"THE CAR": I barely remember this 1977 thriller involving a Lincoln Continental turned into a killing machine. This black Continental Mark III was made into something odd and ostentatious. It was again the work of Barris Kustoms in crafting an ugly front end onto the lengthy personal luxury coupe. You can’t beat the cast – James Brolin and Ronny Cox. Still, this car was killing people, the heroes try to kill the car and, in the end, it lives again. Sounds like a pattern here.

THE DEATHMOBILE: So, someone crashed Flounder’s 1966 Lincoln Continental convertible. There is a way to fix it…and crash the Faber College Homecoming parade. Only the men of Delta Tau Chi can do such a crazy stunt. They disguised the car as a cake, then – ta da – it becomes the "Deathmobile." There is more to the plot build here from "National Lampoon's Animal House," but you get the idea. The result was a bunch of scared folks at the Homecoming parade, mass chaos and a great ending to one of the most hilarious films ever made. 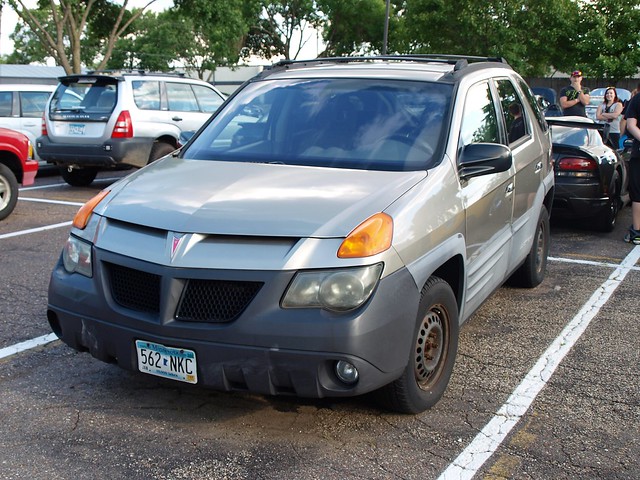 2001 PONTIAC AZTEK: Maybe I'm stretching the boundaries of "scary" here. To be fair, this does not anything to do with Richard Hatch winning one on the first "Survivor" or it becomes the vehicle of Bryan Cranston's success in the entertainment field. Rather, it was the idea of plastic cladding, multiple push buttons and crafting the twin-kidney grille and arrowhead anywhere they can that made up Pontiac’s design language since the 1980s. Some people had nightmares about this vehicle. I’m sure you did, too.

MAYBACH EXELERO: Nightmares are made of this. This was a design concept by Daimler AG's ultra-luxury brand to evoke the classic coupes of the 1930s and made them into cartoons. This car looked like one of those cartoon cars that pulled up on scenes from Hollywood. It also was a frightening piece of design – with macabre looks and a few frightening details. It was actually a working prototype that produced a few examples – one went in the hands of rapper Birdman for a cool $8 Million. I doubt if you can daily drive this thing with its scary looks, though.

ZIL: It would have been easier if the Soviets had not ruined the legacy of Packard in making them their ultimate limousine during the Cold War. Later models were ominous, stark and just massively frightening. They evoked fear among the cold warriors – all the way to President Ronald Reagan. In fact, the Russian government still uses ZIL as their state limousine. No matter how you feel about President Vladimir Putin – it could be downright scary when you see one rolling out of Red Square.

THE PRESIDENTIAL STATE CAR: How can the United States of American equal the Russians? They did in 2009 when the big massive limousine rolled out for President Barack Obama's Inauguration. It not based on any Cadillac model, except for its design elements and the headlamps from an Escalade. Underneath the limousine is a General Motors medium-duty truck chassis, which the body is built upon. Power comes from an unknown gasoline-powered engine that gets real low fuel economy. The tires are from a medium duty pickup and are run-flats. The massive and ominous presence is mostly due to the armored protection necessary to protect the President. It also has its own defense systems onboard. If that does not scare anyone…I don't know what does. Incidentally, GM has the contract for the next Presidential limousine. It could be even scarier….

FORD FALCON: Speaking of scary, political situations…during the 1970s in Argentina, if you saw a drab colored car that looked a 1960-63 Ford Falcon coming down your street – you better not have pissed off the military junta. Ford of Argentina starting making first-gen Falcons for the Argentinian market since 1962. While they kept the body shell and chassis, they have modernized it over time from grille textures to engines. The Argentinian government favored them for their anonymity and blandness. It was the right tool for the "Death Squads" to seek out their enemies and take them away into the night. This was not a horror film…that really happened until the Falklands/Malvinas War.