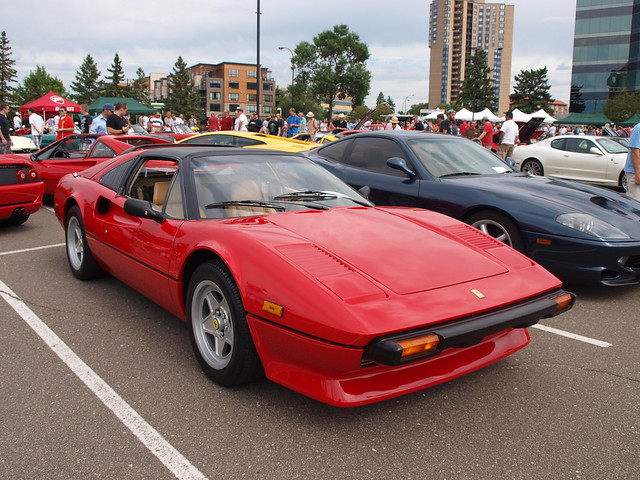 When most of us were younger, we probably had a poster of some vaunted supercar. Lamborghinis, Ferraris, Porsches, Bugattis, Paganis…you name it! These are the stuff of legend for the pre-driver's license crowd.

Then, we grow up. We've either gawked at enough of these beauties, sat in one, driven one – or owned one. And, we’re in awe of them. Even the most car-hating person can appreciate the beauty of a supercar/sports car/grand touring car/etc. C'mon – admit it!

Why? They are the dreams of the automobile world. If one had an imagination and wanted to create something reaching the outer regions of the possibilities, these are it. Vehicles that are at home on the road and on the track. As they get older, they become star attractions to various car shows and Concours d'Elegances around the world.

For me, they provide a context point in my automotive writing. As the highest expression of the breed, these sports/super/GT cars employ some of the finest engineering points to study against more mundane machinery. The vehicles also provide a counterpoint to every one of my subjects covered on this blog as to enjoy these vehicles, you have to be on the extreme end of a driver's competency scale.

It was not until a few years ago when I started driving these untouchable machines.

But, this blog is begging for a Favorites list of these so-called exotics. To placate this void, I'll give you my favorite superdupercars. You might not be surprised…

1975-1985 FERRARI 308GTS/i/QUATTROVALVOLE: Oh, yes, that Ferrari. As delicate of this Pininfarina flower, it served as the Prancing Horse's best selling product. The reason behind this was the cracking of the code to create a balanced mid-engined sports car. By creating a two-seat cabin in both coupe and targa bodies, they transversed a 3.0 liter V8 behind the seats and ensured its way through every situation it is put through. It did not come with its own flaws. Such as practical, every day driving – in Los Angeles. Sure, you can buy a Ferrari, but what good is it in traffic? Whether it's on the 405 Freeway or Sunset Boulevard, the V8 wants revs to keep going. Otherwise, it will go kaput. That’s why you buy a Mercedes or a Rolls when you buy a Ferrari…

1968-1973 FERRARI 365GTB/4: A Prancing Horse by any name is worth its weight in platinum. But, why a twelve-cylinder one? Sure, I prefer eight-cylinder road cars over the beastly twelves! This wasn't any ordinary twelve-cylinder Ferrari road car – this was the best. The 599GTO? Not yet. Not when it has to hurdle over the Daytona. It’s a two-plus-two that was comfortable, fast and unbelievably taut. You’ll hate the steering, but that’s the only flaw on this late 1960s tour de force of sports touring machines. This Daytona was made for a run to Pebble Beach and the 17-Mile Drive. It made the Palm Beach arrival from Miami Beach just worth the jaunt. Out goes the golf bag and life is such a dream. That’s why you get a Daytona – or, my second choice, the 456GTA from the 1990s.

1975-1986 LOTUS ESPRIT: The Lamborghini Countach was too hard-edged. It was just too severe for its time – just like today's Pagani Huayra. The Ferrari 308GTS/B were just beautifully delicate. A Pininfarina-designed petal that demanded baby care at every mile. Supercars back in the 1970s were more fun because the electronic nannies were far from being implimented as they are today. Yet, they were also delicate flowers that needed to be nursed after a hard drive down the canyon or the desert straight. Giorgetto Giugiaro had his hand on a supercar, or several. He was commissioned by Colin Chapman to create something more spectacular amongst his road cars. The Esprit was a thing of modern beauty. It was neither Bertone hard or Pininfarina soft. Underneath was Lotus’ own 2.2 liter motor – once again proving the whole mystery of power-to-weight ratios Lotus loves porviding to its road car owners.

2014- LAMBORGHINI HURACAN: When you think of the cars from bull stable, you think of the most outrageous and heavy handed to drive. We're talking Miuras, Countaches, Diablos, Murcialagos, and Aventadors. Not every Lamborghini has to have a big 12-cylinder engine planted in the rear with no rearward vision to speak of. They also sold "smaller" models. Not as desirable as the big bulls, but just as bullish as they should be. However, we are blessed by an easy-to-drive and civilized Lamborghini, the 10-cylinder Huracan. No need to clutch these days, as the dual clutch transmission handles the 610 horsepower load. In the coupe, you sit comfortably and relaxed as you blast off on the highway. You can get a Spyder with a smaller cabin, but I prefer the normalcy, the technology and the comfort of the coupe.

2014-2017 McLAREN 650S/675LT: Can you make a perfect supercar? McLaren thought so. They did so by building off of a carbon fiber unibody, create a truly independent suspension with individual dampening controls and make everything else smart. It is smart supercar – not just by looks alone. Nor is it completely civilized. Nor brutal. But, it packs a wallop – 641 horsepower in the 650S, 666 horsepower for the 675LT. We often forget that these cars are made to be driven. Staring at it won't make it go any faster. But, once you pilot one – it is worth that smile on your face. That is what a McLaren is supposed to do – bring smiles to those who already love its rivals, but are drawn by the history and the mystique of Bruce McLaren's namesake company.

1989- PORSCHE 911 TURBO/TURBO S: The world's most popular sports car has been around as long as I have on this Earth. Yet, it has gone through many amalgamations and various forms of rhinoplasty to keep itself young and fresh for drivers to enjoy. recently, I drove a 911 Carrera 4S cabriolet – my first ever of this great line. However, driving one is just the tip of the iceberg. The next step is to drive a Turbo – a real one. It all started with the 930 and its huge turbocharger. Driving it you have to understand how to manage the equally huge turbo lag that happens in the lower gears. Later models took on technology that would filter down to lesser Porsches. The top model has 580 horsepower on tap with an easy to use PDK transmission driving to all four wheels. Oh yeah, and it's the most reliable sports car in the world, too!