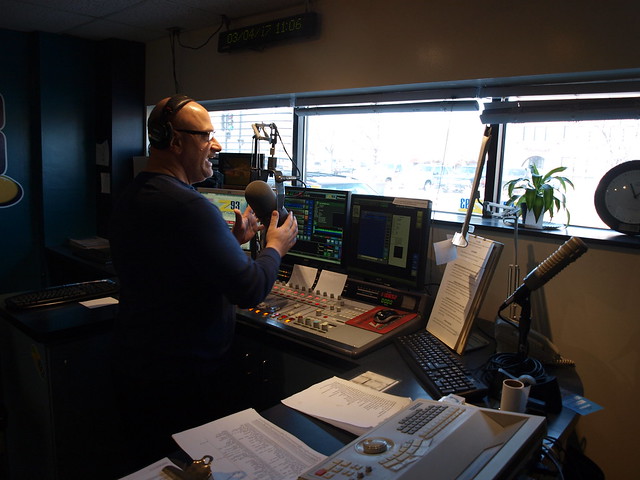 When I was a kid, I wanted to be a radio air personality.

They called these men and women "disc jockeys" in my day. They had to multitask between cuing up vinyl records, filling air with talk and plugging in commercials. From records, they went to cartridges – and dial pots went to flip pots.

Today's radio broadcasts are run with massive automation thanks to using computer files for everything from pre-recorded voice breaks to music files to creating transitions between station promos, commercials and such.

But, why do I bring this up? Last year, a colleague of mine took on the role of weekend midday air personality at a radio station in La Crosse. He was a fellow member of the automotive media corps. Prior to being a part of the automotive media, he had a full-time gig at the same station. Though he returned last year part time, Tom Stryker is still making things happen to the Coulee Region of Western Wisconsin and Southeastern Minnesota via the FM band.

I had not seen Tom in a long time. On a drive in the 2017 Mazda6, I decided to take the car down to La Crosse and pay Tom a visit. It gave us a chance to catch up on life and the business. However, I was fascinated by the studio he worked at. It brought back positive memories of a failed run at a career.

As Tom stated, a lot has changed in the radio business. This goes beyond how each broadcast is delivered, but how independent radio operations are competing against more corporate entities and other broadcast delivery platforms. He is lucky to be working at a locally-based radio broadcaster with several channels offering a variety of programming. Tom's slot is on the top rated station in La Crosse – a Top-40 station. From what I observed, he's loving it!

Yet, we know what his station faces in the greater sphere of things. The Twin Cities is a prime example of the proliferation of multicasting through HD Radio by iHeartRadio. They have dominated the market by feeding us a lot of pre-programmed content and a mix of local and national feeds to make it look like "local radio." That is bookended by stations owned and operated by CBS, ABC, Minnesota Public Radio and the Pohlad Companies. Those stations still maintain a local-ness to them, which is helpful for those of wondering what happened to the state of radio as a robust and adventurous broadcast medium.

Back at Cal State Northridge in the mid-1980s, I never thought I would see the future of radio. Heck, I never got to see a radio station studio in my year post-transfer from Los Angeles Pierce College. I only had romantic visions of radio, even though I was more exposed to television production than other broadcast forms. My high school visits to KCET, an affiliate of PBS at the time, gave me a view on how broadcasting worked.

A small glimpse at the old location of KROQ in Pasadena helped. I remember visiting the station and seeing the old flip "pots," the board and microphone where my heroes once worked – people like Richard Blade, Jed The Fish, Dusty Street and Rodney Bingenheimer. My subsequent move to the Bay Area gave me access to Alex Bennett's morning show on occasion at Live 105. That was even more elaborate than the bare bones of the old Pasadena studios of KROQ.

About over a decade ago, I made my radio debut as a guest on a show at KFAI in Minneapolis. I had a chapbook of poetry to promote and was paired with a great mystery author that first night. I was nervous as I went live. The immediacy of radio, surrounded by a mix of current and past technology, was both delicious and nerve racking.

Walking into Tom's studio at Z93 in La Crosse felt more intimate, with computer CPUs, screens, a familiar multichannel board, and software that reminded me of Garage Band. Even as we talked with the music and commercials playing, I was observing the screens, watching the queue and seeing how transitions were made tighter. These were the advances that were never factored in my early undergraduate studies.

What was missing was a desk that encompassed the studio. There is a lot of room to roam, which is great. Yet, I always envision a studio like the one at KFAI where the air personality was on one side and the guests were the other. Though, I will admit liking the arrangement Tom has at Z93 better.

It all comes back to an old childhood dream. The dream that began at a second grade project called “Sparkle City.” I took on the paper mache role of the town's broadcaster and ended up being mayor. It was an election year, by the way. I was already reminded of Baxter Ward, the Los Angeles broadcast legend who became a member of the Los Angeles County Board of Supervisors, by my teachers. But, there I was, replete in a houndstooth jacket with a microphone in my hand – a figure in wood and paper mache.

That dream never materialized fully. I had the face for radio and the voice for the written word.

For Tom, it was a return to the airwaves. Though you can hear him infrequently throughout his shift – in a matter of seconds with song announcements and public service announcements. The rest are the top selling and played songs of today with a few older tracks. After all, he is the weekend midday air personality on the top rated station in the Coulee Region of Western Wisconsin and Southeastern Minnesota. You can be a similarly sounding teenage girl asking for a sing that played a hour ago to be played again.

Why does this remind me of Harry Chapin's "WOLD"?

I admit misunderstanding the song when it came out in elementary school. It fed into that naive dream. This dream could be seen as deferred. Some of my colleague shave taken up podcasting – which is do-it-yourself radio. Well, at least it was. Some of my friends have done it to levels of success. Though the idea of podcasting is still being thought of, but the mechanics of doing so are not economically conducive to the kind of investment to satisfy a potential listener pool.

Still, it was great see my friends and colleagues do fantastic things within their realm. Very happy for Tom doing what he loves doing. I do miss him in the automotive media business. But, as I said, Tom looked very happy behind the board, the screens and the microphone.