Welcome to Minnesota, where its public radio entity has three channels to choose from. The first two you've already guessed, but how about a commercial-free, ecclectic music station that does not play "weird stuff" all of the time? A station that starts with the Olympic Hopefuls, goes into John Hiatt, then Michael Franti or The Roots, then Michelle Shocked...you get the picture. They call this The Current. And, I like it! Well, so do many of my fellow 25-45 year old demographic friends and acquaintances. Radio has been my friend for years. Without it, I wouldn't have discovered a lot of the music that has forged my life throughout the years. As a kid in Reseda, that Montgomery Wards stereo worked hard to get KDAY and The KAT (later KKDJ) from the AM dial straight outta South Central. If it weren't for those two seminal stations, hip-hop wouldn't have been a part of my soul. When KDAY blasted the long version of "Rapper's Delight," I thought I was heaven. Nowadays, when the Black Eyed Peas come on one of these corporate-owned FM jukeboxes, I just want to cringe. What has changed? Let me go back a few years... 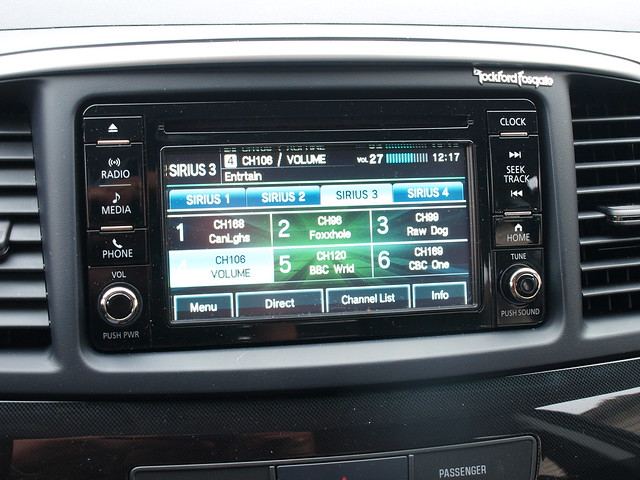 Welcome to the Twin Cities, where the radio market is dominated by iHeartRadio and its multicasting in HD Radio that is full of pre-programmed stuff from studios across the USA. Then, there's Minnesota Public Radio with its own multicasting channels that fit its three main channels from eclectic, cool music to classical to the news.

It is no wonder why I listen more to SiriusXM these days.

Radio has been around for my listening pleasure since the days of my youth. Without it, I wouldn't have discovered a lot of the music that has forged my life throughout the years. As a kid in Reseda, that Montgomery Wards stereo worked hard to get KDAY and The KAT (later KKDJ) from the AM dial straight out of South Central Los Angeles. If it weren't for those two seminal stations, hip-hop wouldn't have been a part of my soul.

When KDAY blasted the long version of "Rapper's Delight," I thought I was heaven. Nowadays, when these Instagram and Snapchat rappers come on one of these corporate-owned FM jukeboxes and on a select few SiriusXM channels, I just want to cringe.

What has changed? Let me go back a few years…

Back in San Francisco, the idea of local radio personalities doing what they want on the air was alive and well ten years ago. This is thanks to Alex Bennett, who held a morning show on Live 105 before Infinity Broadcasting (now CBS) bought them out and regurgitated it into an alternative radio station-in-a-box. Since Alex was connected to SF's comedy scene, he brought in local and visiting comics along with other guests for four hours of discussion and laughter broadcast in front of a small live studio audience. And, it was completely live! Even the complaints on how late the show was running and the banter between his staff and everyone else! Sadly, this concept is no longer available on any broadcast radio station in the country.

I also miss the hype of local personalities. In DC, WPGC had Big Tygger as their shining star five years ago. Before he went to BET, Big Tygg was young and brought a lot of local flavor with him from the Hip-Hop underground brewing in the Nation's Capitol to the city's own local flavor: Go-Go! One wonders when a local superstar goes national how much he'll lose his local edge. Much love to Big Tygg, but never forget where you came from!

And that brings me to my memories of local radio in L.A. Can anyone remember KROQ when they were operating out of that old small Art Deco studio on South Los Robles Avenue in Pasadena? I do. I also remember when Rodney Bingenheimer introduced The Go-Go's before "Beauty and The Beat." They had an independent single before I.R.S. signed them. Not to mention all of the L.A. and Orange County punk that Rodney played every Sunday night. Ah, those were the days!

Today, I can get that old KROQ feeling back into the vehicles I work with – in two ways. CBS Radio multicasts an HD Radio station underneath the regular KROQ frequency called KROQ2. That station plays the music from the old days when the station was in Pasadena. For SiriusXM listeners, they could tune into the First Wave channel in the afternoons to catch Richard Blade on the air. Blade was a KROQ DJ back in the 1980s and have been doing various gigs supporting Alternative/New Wave music from that era from corporate DJ gigs to broadcasting his show from his home in Los Angeles.

With SiriusXM, I can also get my comedy fix outside of the four-hour window that once filled the Bay Area's airwaves. There is a total of seven comedy channels across the satellite bandwidth. Choosing the right ones depend on whether you want four language or not. In my case, all I need is to have George Lopez, Gabriel Iglesias, Kevin Hart, Alonzo Bodden and such to fill my speakers for that much needed laugh.

There is a new channel that is worth mentioning. It is great to listen to music, but sometimes we want to hear the stories behind it all. Late last year, Volume took over the channel spot from OutQ for an all-talk on the topic of music. This channel is actually quite fascinating, between a show featuring Mark Goodman (fomrerly of MTV) and Alan Light (music journalist) "debating" everything about music. There is also programming hosted by Eddie Trunk about anything Metal, Melissa Etheridge just chatting with and her friends and Ron Bennington with his musician buddies. If you notice, you might hear Goodman, Trunk and Bennington on multiple channels across SiriusXM.

If there is one personal reason to listen to SiriusXM, it would be Sway Calloway and Heather B. If those names look familiar, then you remember MTV from the 1990s. Sway came in to work with the News, while Heather was on the cast of the first "Real World." Heck, I'll go back to my Bay Area days when Sway was one half of a mix crew on KMEL. Together, they are part of a crew that fills the morning satellite bandwidth on Shade 45, the station commissioned by hip-hop artist Eminem. They offer talk, interviews, freestyle bars and lots of laughs.

With all of this talk of terrestrial and satellite radio, one wonders where podcasting fits into this picture. If set up right, the Bluetooth or USB connection, along with Apple CarPlay and Android Auto, would add the dimension of digital audio broadcasts that range from homegrown shows to snippets from TV and radio programs available for download anytime. It is safe to say that I knew a few colleagues who do their own podcasts for download and playback.

Even in this business, I am also fortunate to know several colleagues that are on the air and worthy of listening. In La Crosse, Wisconsin, there is my friend Tom Stryker with his weekend slot on Z93. There are also a few others who might show up somewhere on a radio station near you.

It's strange how radio has changed. We've gone from AM Pop, Corporate FM, online streams, satellite subscriptions and HD Radio multicasts. For now, all I can do is reminisce about the days when radio was free with real, honest-to-goodness local original programming.