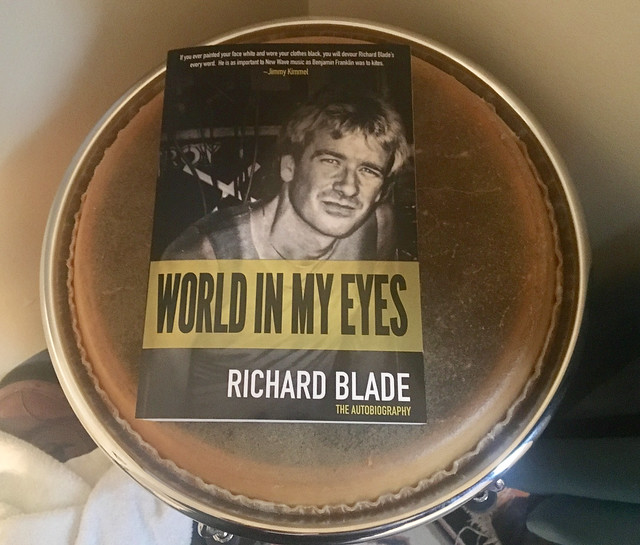 First of all, I am not a book reviewer.

However, this column is about a book. This one was written by a well-known air personality and disc jockey who was at the center of a movement in radio programming. His voice can still be heard on SiriusXM's 1st Wave channel, along with various appearances at DJ and MC events related to the decade of his greatest professional triumphs.

The air personality is Richard Blade. His book is called "World In My Eyes."

I have never met the former Dick Sheppard from Torquay, Devon, England. I have heard and seen plenty of him during the 1980s as part of the crew at KROQ-FM in Pasadena. His voice was a standard within the "ROQ of The 80s" format – known as New Wave. Its foundation came from the music from Great Britain and New York City that stemmed out of the Punk movement. New Wave encompassed many styles – influenced by Jamaican and Caribbean genres and the raw punk that rebelled against Glam and Progressive Rock. Heck, Glam was indeed an influence upon New Wave, New Romantic, and other so-called Alternative Rock genres.

Blade's impact on the new musical genre and the Southern California media market is best considered seminal. One could argue that he shared the Los Robles Avenue studio with some of the best air talents at the onset of Alternative Rock Radio – Freddy Snakeskin, Jed The Fish, Dusty Street…to name a few. However, he took his position and good looks to the small screen in stints on MV3, Video One, and Video Beat on a couple of local television stations in Los Angeles.

Blade's popularity grew to become the top radio personality in the Los Angeles market. He was bigger than some of the more established names in Southern California, namely Rick Dees of KIIS-FM. For years, Blade commanded KROQ, alongside later voices that cemented the station's top billing in the market. Though he left in 2000, Blade returned to radio on the SiriusXM 1st Wave channel five years later. He has been a fixture since – another 18 years on the air bouncing between satellites.

It is not often when I get interested about a book. A lot of autobiographies can get self-righteous or pursuits of ultimate egomania. If you listen to Blade, he delivers genuine storytelling on his programs – in particular, stories of his favorite artists from the era. If you tune out the self-promoting bits, Blade is fun to listen. When he announced this book prior to publication, I had an inkling that this will be one wonderful story after another. I knew I was going to enjoy this book and learn more about this voice that used to come from my home speakers.

After the release of "World in My Eyes," I considered getting a copy. Yet, I wanted to get it from a bookstore locally. One visit to a local Barnes & Noble turned up dry with an invitation to order online. I thought about visiting an independent bookstore in Minneapolis, but I remembered how much I missed its last driving force – an old literary fan and friend of mine who passed away last year. I was trying my best to avoid going online – I wanted the experience of taking home something tangible. Yeah, I'm kind of weird like that…

During a call with my significant other, the topic of books came up. He asked what I was reading – which was nothing at the time. Then, he asked what I would consider reading. I mentioned Blade's book. Sure enough, on a visit in mid-January to the Twin Cities, he gave me a present in advance of my birthday. It was “World In My Eyes.” I immediately dove right into the book, reading it alongside him in bed. He was reading an old Armistead Maupin book. What a pair, we are!

About the book, the reader is introduced to a storyteller. If you listened to Blade's radio, television, and live shows in the past 30-plus years, he loves telling stories. Every chapter is a story, each one has given a song title that is appropriate for the chapter. Blade takes you from his childhood, through college, his early DJ gigs across Europe, his eventual landing in Southern California, and his triumphs and tragedies along the way.

In the second half of the book, you get to meet the artists that framed Blade's broadcasting work in the 1980s. If you listen to his show, Blade has no qualms telling you who his friends are from the music business – which just so happens to be his favorite artists. He also takes you into his interactions with the genre's – and the music business' biggest artists of the time. In fact, you read many times over how appreciative these artists were of their getting key airplay in the Southern California radio market towards adding record and album sales from KROQ listeners.

Hint: the title of the book came from a song of one of Blade's favorite musical acts. Guess which one?

I would name these artists from the last two paragraphs. Since I believe that "reading is fundamental," go buy your copy and find out!

If you do not want to read this book, the audiobook version is being recorded for later release. There will be a special guest voice on the audiobook. Again, Blade has announced who he is….but, I'd rather have you be surprised when the audiobook comes out.

Autobiographical books are invitations to look into the world of a person. You need to read their stories from their perspective and time-space. In terms of radio personalities who have been influential in advancing their genre of programming, picking up a copy of "World In My Eyes" will give you an insight on how Richard Blade did exactly that and the path he took to get there. And, why he is still relevant today.

Call it nostalgia, but it is this radio listener's nostalgia.