When we get to a certain age...or, near it...we often compile a list of things we always wanted to see or do before it’s too late. As fatalistic and morbid as it sounds, the bucket list is where our dreams get a final chance to be fully realized.

When we get to a certain age…or, near it…we often compile a list of things we always wanted to see or do before it’s too late. As fatalistic and morbid as it sounds, the bucket list is where our dreams get a final chance to be fully realized.

One line item of the bucket list was scratched off this weekend. This one goes back well before I began driving.

I will admit that for years that I had a serious love for Saabs. This love began back when I saw my first 99 at a Los Angeles Auto Expo around 1971. During my junior year at Reseda High, my dream car was a 1981 Saab 900 Turbo sedan with the Borg-Wagner automatic gearbox. Loving such as a car may seem wrong to most of my peers at the time. Perhaps, I was better off attending rival Taft High School, where Euro car snobbery was a prevalent form of being popular.

The reason why I love Saab was simply because these cars defied convention. They were completely different than your usual vehicular choices in the marketplace. Owning a Saab was a form of rebellion and deference to the BMW/Mercedes-Benz establishment. The engine was pronounced under a front opening hood that slid and titled when you raised it up. The key was in the center console. Manual gearbox owners had to put the car in reverse to start it – or, so I was told a long time ago. Your instrument panel arched towards you but upright from the floor, while you sat in the most comfortable seats of any European car of that era. 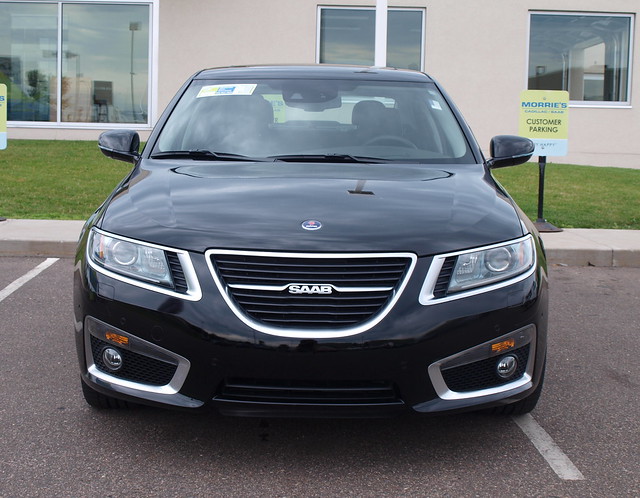 Despite rumors to the contrary, Saab is still alive. After an infusion of cash from two automotive firms in China, the plants are operating again. Spyker tried its best to maintain "business as usual" with the Trollhattan, Sweden-based automobile company. Yet, the Dutch producer of over-the-top automobiles could not maintain the investment needed to ensure the future of the once and mighty Swedish manufacturer. Throughout the current Saab lineup, many signs of one of its former owners, General Motors, are still present and tangible.

Why talk about Saab without delving further into the latest transaction with the Chinese? I happen to come across a car show and swap meet at the Saab dealership in Golden Valley, Minnesota. A flood of memories came over me as I examined each 900 and 9000 on display at the dealership lot. While sharing some stories with local car club members and dealership staff about my love for Saabs and the work of this blog, I was given an invitation to do something I never thought would be possible: Taking a drive in the newest Saab – the 9-5 sedan.

Though my love for Saabs date back to the 99s of my youth, anyone who shares my love of those pre-GM models may see the newest 9-5 as an aberration. Instead, I approached this big sedan as a strong contender amongst executive sedans in the $40,000-50,000 range. Today’s marketplace dictates that an executive sedan must embody a handsome look, plenty of power, great driving dynamics and room for four adults heading across town to the big meeting.

To satisfy both sides of the debate, the new 9-5 fuses traditional Saab elements onto a modern executive sedan. The result is a clean, handsome body that one would not be confused with any other vehicle in the market. It is a big car, but it is quite taut from many angles – just like Saabs of yore. 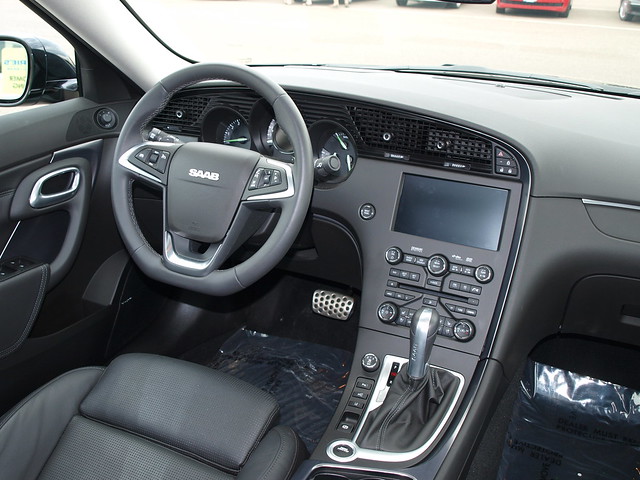 The cabin also retains some Saab-ness inside, as well as some modern touches. The 9-5's instrument panel is a modern interpretation of the original 9000’s fascia. You do get some GM touches here and there, but the buttons seem more Saab-like than anything plucked off the parts bins of Russelsheim or Oshawa. In fact, these Saab switches work much better than their GM counterparts. The ignition is where it is supposed to be – on the console. Nowadays, you simply press a button instead of inserting a key right next to your thigh.

The Aero model I drove came with a very nice heads-up display that can enhance your forward vision without being obtrusive. Plus, you get GM's latest navigation system with its great graphics (as in the Buick Regal CXL Turbo I reviewed in May), along with OnStar, Bluetooth connectivity and XM radio – all channelled through eleven Harman/Kardon speakers with 5.1 surround sound.

The 9-5 Aero is the first car I've driven with a lane departure system. If you're not aware of your lane position, or about to nod off even for a millisecond, the system will beep at you when you veer towards the next lane over. You can turn it off, but I don’t really recommend it. Before anyone wonders if I used it or not – all I can say that it works extraordinarily well.

The front seats are firm and supportive with plenty of adjustments available to make things more comfortable as needed. Where the 9-5 won me over is in rear seat room. It is adult-sized and comfortable in the back. The trunk gives you 18.2 cubic feet of serious luggage space for a full car going on a long weekend. 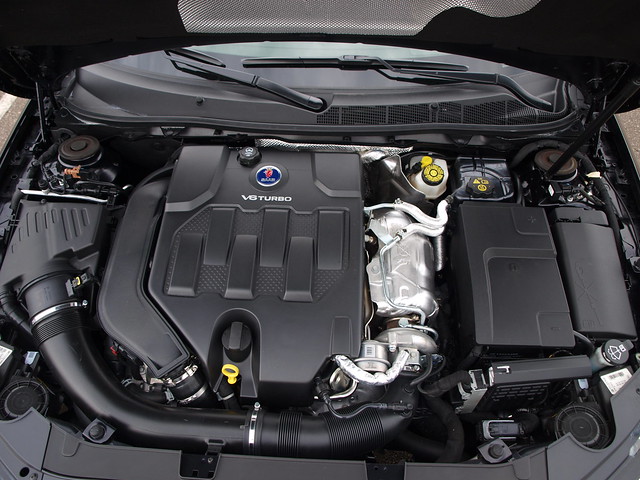 The 2.8 liter V6 turbocharged engine under the hood is an absolute treat. With 300 Horsepower on tap, the turbo V6 provides a steady stream of power throughout the revs. Put your foot down and it will take off like a Viggen jet. Connected to this powerhouse is a 6-speed automatic gearbox with paddle shifting for those want to shift the gears it themselves. Saab’s XWD (Cross Wheel Drive) system spreads this fantastic wave of power to all four wheels.

Where the 9-5 won me over was in the way it behaves itself on the road. I use the word "solid" a lot when it comes to describing the ride quality of a vehicle. This is true for the 9-5, as the ride was very solid and comfortable – just as I expected from an executive sedan. It handled superbly with flat cornering and positive body feedback. The DriveSense system was onboard, where I could have selected from three settings to alter my driving mood. I noticed that it was on Intelligent mode where the system automatically manages everything related to the performance and handling of the car. I wouldn't dare switch it to any other setting, as the car was simply fantastic to drive. Maybe on that oft occasion of encountering a tight, twisty road, I'd switch the DriveSense to Sport mode for that reason alone.

While turning response was sharp, I would have preferred a tighter steering radius. The brakes were absolutely confident in every situation the 9-5 encountered.

Unfortunately, I was unable to get a fuel economy reading, as it was a very short stint behind the wheel of the 9-5 Aero. Saab USA says it should average 20MPG. If you could live with that, it's worth the investment at your service station. It is worth noting that if you choose the standard 9-5 with the 2.0 liter Turbocharged four-cylinder engine, you can also put E85 Ethanol into the tank. 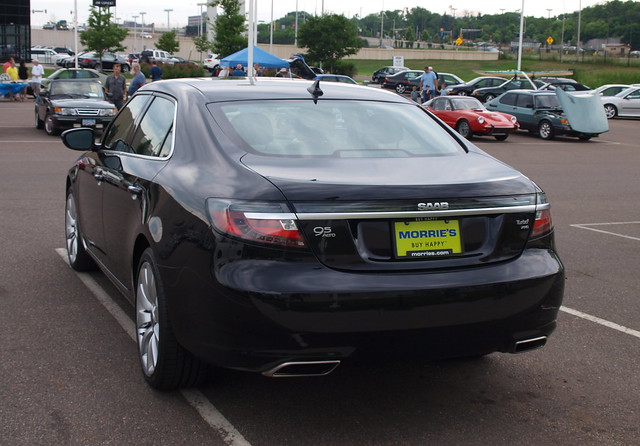 In all honesty, I absolutely love this car. Yet, I'm torn. The Saab purist in me may have an issue with the sticker price of around $53,000. The same purist will have conniptions because the 9-5 was developed under GM with its original intention to build in Russelsheim instead of Trollhattan. I may have to grieve over the fact it doesn't have the quirkiness and the soul of the old 900 Turbo sedan I fell in love with at the age of 17.

However, as an executive sedan, I would certainly choose the 9-5. You can still be a Saab enthusiast and embrace the defiance of convention the brand embodies, but the 9-5 also satisfies the requirements of today's premium market consumer. The Aero model alone is worth the price of admission.

In one stroke – rather, one drive – my bucket list is one line item shorter. My Saab experience is now complete…or, is it?