Just in time for V&R@5, Quickies have returned to V&R!

To explain, a "Quickie" is a vehicle review based on a briefer encounter with a specific product. It is an impression that does not go deeper than the usual review, but there is enough information from the experience to convey its highlights. It is also a spawning point for a story or a few in which the vehicle has a significant part in.

Let's jump to V&R's first Quickie in about…um…more than a year!

The small Mercedes has grown up.

If you have a long memory like mine, Mercedes-Benz always emphasized its "standard sized" model as the driver for the brand. That eventually became the E-Class and that truth continued until recent times. Not just because the average price of an E-Class has scaled well above $60,000, but rather a few more demographic changes in the luxury car market.

Even when the W124 became the E-Class, Mercedes had to sell a smaller model – the W201 190E. The idea was on point in terms of customers wanting a lower-priced, smaller entry into the world of the three-pointed star. Yet, it was really small. Interior comfort was cramped for larger folks, who eventually had to find more money to pay for an E-Class.

It took several generation for the smaller Mercedes to find its lane among luxury car consumers. The 190E became the C-Class and the car itself grew to match its main rival – the BMW 3-Series. The two German juggernauts played "can you top this" with variants, body styles and performance to try to knock each other out of this highly contentious segment. Instead of outselling the 3-Series, the C-Class soon became the leader of its brand's sales.

For 2015, a new W205 C-Class arrived with styling influenced by the newest W222 S-Class. Mercedes-Benz hoped that by upping the styling quotient, it would attract first-time luxury car consumers looking for distinctive style, brand qualities and that extra special feeling required when wants to spend about $50,000 on a "compact" premium sedan.

Since October, I had the chance to drive two C-Class sedans briefly. The overall impressions have been favorable from the cabin quality and execution, the design with the "sport" grille, the exterior as it matches the lead of the S-Class, overall chassis dynamics, its turbocharged four-cylinder, seven-speed transmission and solid 4Matic all-wheel drive system. In other words, this is a good car.

I am not going to let you all off that easy. A Mercedes-Benz is supposed to be an aspirational vehicle. It needs more than just bullet points to understand the good things that make this car what it is. We need to dig deeper.

Exterior-wise, it is more distinctive than before, though the S-Class derived styling could offer a debate on whether it should be more distinctive within the lineup rather than influenced by its most prominent model. The point of doing this makes us point at the car and say "yes, that is a C-Class!" The Sport grille is one telltale sign of the car's distinctiveness. It simply fits the personality it really wants to become.

Looking closely, the longer hood with the front wheels pushed far forward helps in the visual validation of the C-Class. The entire look is classic, elegant and befitting of its readiness to go to war in this segment. 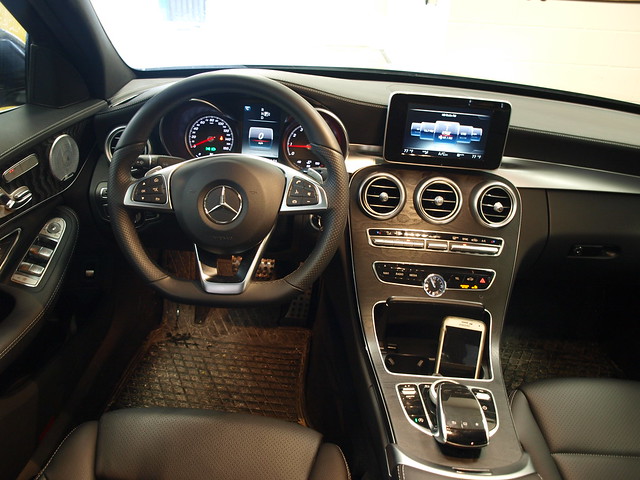 From the outside, the front doors open wide to invite you into a cabin that is simply wonderful. This is where the C-Class comes alive with higher levels of elegance and materials. Burmester speaker covers with bespoke details, leather on the dashboard and door trim, and a fantastic TFT screen in-between the two big instrument dials. COMAND manages a semi-attached screen that covers infotainment and other vehicle functions.

There are some drawbacks to the C-Class. First of all, it is made for average-sized adults at its maximum space capacity. Anyone my size – large and tall, will find issues in the back. However, I found great head and legroom than I have never found in any small Mercedes before this one! A minor victory, which is actually let down by the sports seats themselves. Granted the bolstering is thick and meaty, yet wider people will find the lack of actual comfort in-between them. Mercedes-Benz used to have huge comfortable seats that offered balanced support. Sadly, I have yet to enjoy one in the past few years that loves my body and my back.

There is redemption underneath the hood. The C 300 has a four-cylinder turbocharged engine under its long hood. The 2.0-liter unit spews 241 horsepower of smooth power with minimal lag. The 7-speed automatic offers smooth shifts with a solid 4Matic all-wheel drive system. With the addition of a good Stop/Start system, the C 300 turned an average of 26.7 MPG with me behind the wheel.

Where the C-Class will win you over is the driving dynamics. They're quite good, though not as aggressive as some of its rivals. The ride is smooth and near-flat cornering. Handing and control are superb. The steering felt a bit numb, but the wheel response and on-center feel are good. Brakes stop superbly, especially when the anti-locks kicked in on snowy/icy surfaces. There is a lot of safety tech on board to keep you out of trouble. In the C-Class, these systems work very well in any condition. 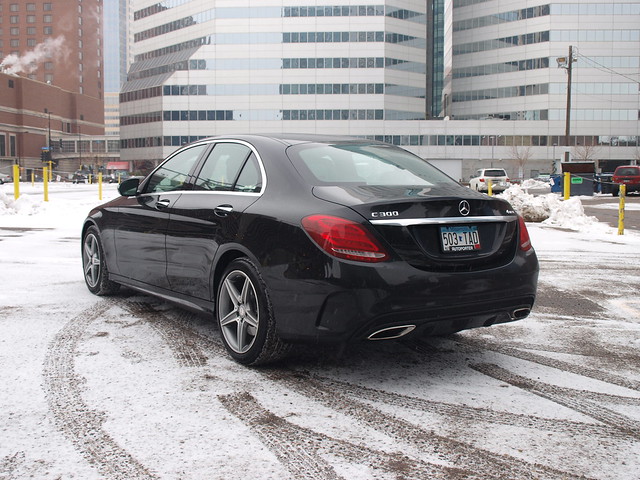 The tough part of about considering the Mercedes-Benz C-Class is what it is up against. The BMW 3-Series looms large in this segment, but some may argue back-and-forth whether they want the Bavarian's business-like demeanor or the opulence of the Merc. The Cadillac ATS, Audi A4 and Lexus IS offer their own arguments for the same demographic as the C-Class. Do not forget, the Jaguar XE and the Alfa Romeo Guilia are waiting in the wings for the same audience share.

But, the C-Class is perhaps the best effort by the team at Daimler AG. Could it be my choice for this kind of money? That remains to be seen.

DISCLAIMER: Vehicle in this review was acquired independently of the manufacturer for Victory & Reseda