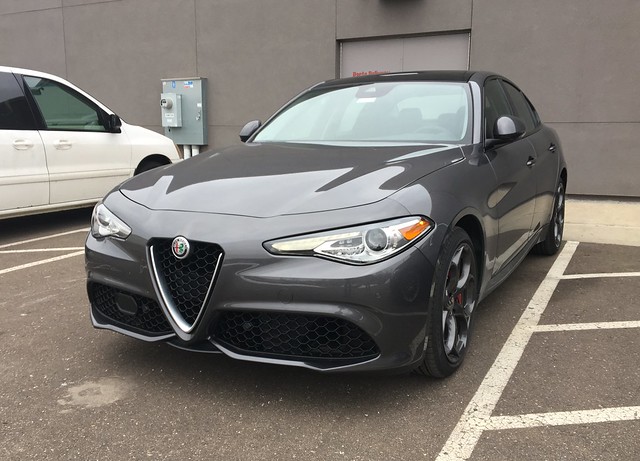 The most anticipated automobile in years have arrived. It is slated to become the savior of the Alfa Romeo's return to North America.

You have read those first two sentences before. They may have been written differently – or the same. Yet, they are two statements that define the 2017 Alfa Romeo Giulia. These are the reasons is to why Fiat Chrysler Automobiles have a lot riding on this new premium sedan for this market and beyond.

FCA, the Alfisti and everyone else have been waiting for too long for a Giulia to arrive at any showroom in the USA and Canada. Because of its position in the marketplace, Alfa Romeo has placed a lot of chips on a red spot on the roulette table. This and the upcoming Stelvio SUV are what FCA thinks we need for us to return back to the lair of Milan's finest products.

The Giulia's arrival into North American showrooms is a huge step. It gives potential customers a chance to see whether they can trade in their BMW 3-Series, Audi A4, Mercedes-Benz C-Class, Cadillac ATS, Lexus IS and Infiniti Q50 (or G37 sedan) for one. It also gives Jaguar XE shoppers another car to try in comparison.

Perhaps I am overemphasizing the Alfa Romeo Giulia's impact on this market. But, understand how much anticipation this car has been on the minds of everyone remotely interested in it. And, how much getting to drive one will mean in a highly competitive and high profile segment attracting the upwardly mobile and the hardened enthusiast.

To shake things up, I did not drive the image model – the Quadrifoglio. The dealer I visited had one, but the battery was drained after many test drives the day before. Instead, I was shown a Ti with the all-wheel drive system. While the Quadrifoglio attracts and woos potential customers, it will be the base and Ti models that paying customers will end up taking delivery of.

Let me say this: You will not be fully disappointed.

First off, there is plenty of continuity between the monster that is the Quadrifoglio and the lesser models. If you can live without the carbon fiber aero add ons and the big wheels, then you will be perfectly fine with the 2.0 liter four-cylinder-powered models. It is handsome, with a focus on the Alfa Romeo face anchored by the triangular grille in the middle. For those of us familiar with Alfas of the past, we embrace the face. Others might have to dig deep to like it. The rest of the exterior is curvy – expected from an Alfa. Needless to say, things are looking quite good here. 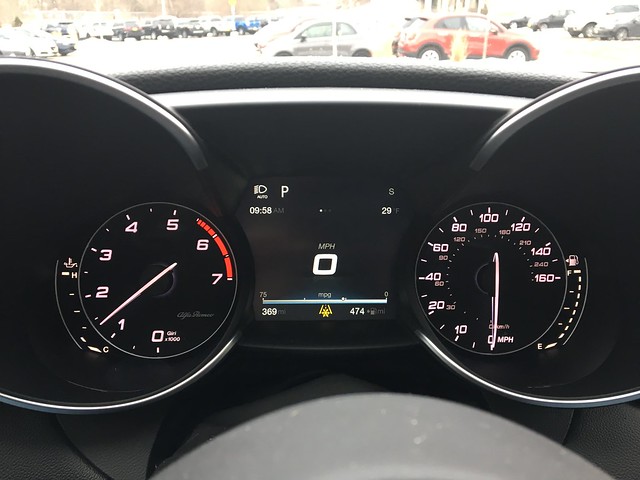 Step inside and you will come to appreciate the mix of Alfa traditional elements – instrument dials, for example – and uniquely modern touches. The instrument binnacle is modern, with a TFT screen in-between the dials. Though the fuel and temperature gauges could be a bit of a challenge to those expecting something more analog. The flat-bottomed steering wheel has the ignition button attached to it – something you don't see on a lot of cars today.

The center console is wide, with the Maserati transmission lever – similar to ones seen on BMWs and the like – and a mix of textured wood and harder leather touches. The big knob in the console operates a decently-sized flat infotainment screen. It is a huge departure from standard FCA fare, which will help the Giulia's cause. The readouts are fine and the controls quite easy to use.

Seating is comfortable and I have plenty of room up front. Rear seat room is fine, but taller people will find headroom a bit of a challenge. Your head might end up in the panoramic roof insert. The rear seat is also a bit hard for comfort. Trunk space is also a bit on the small side, but the rear seats do fold down in the base and Ti models.

I mentioned the engine in the base and Ti is the 2.0 liter four-cylinder engine. It is turbocharged and puts out 280 horsepower. Did I say it is a smooth and lacks turbo lag? Did I also say that the car is quiet? And, you know this is an Alfa Romeo, right? For those of us who want an Italian car to at like any car in the marketplace – this is it! Though, I'd like a bit of brio…some exhaust note that sings Verdi. Then again, that's me. I like how this engine works – it's quick, responsive and quite fun to workm the throttle. Connected to this turbocharged motor is an 8-speed automatic transmission with the available all-wheel drive system.

The biggest question one should have about the Giulia is whether it drives like an Alfa Romeo or not. It does, which is what makes it different than the usual suspects in its class. The ride quality is firm, but it keeps the Giulia in control in the corners and the turns. You expect this in an Alfa or any car in its class. The steering system really has a mind of its own, as it produces precise turns with little effort. It does not seem real, but when you do get to control the wheel – it rewards you. It gets better when you switch the DNA system from Normal to Dynamic. Here is the preview: Everything that is firm already becomes firmer. That is what an enthusiast needs to know.

If there was one issue, it would the braking action. It felt soft as the vacuum boost was a bit long for normal stops to occur. Give it a sudden stop – and it will do exactly that. It nbeeds a bit more vacuum boost to make the Giulia great.

The Giulia lineup starts at $37,995 for a base model with rear-wheel drive. Another couple of grand will gets you started with a Ti upgrade. If you must have the Ferrari-developed twin-turbocharged 505 horsepower V6 of the Quadrifoglio and its carbon fiber aero aids, then expect to fork over at least $72,000 for one. 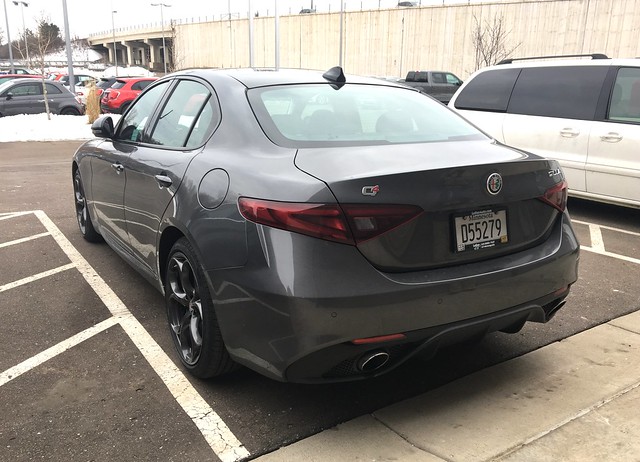 My summation is quite simple: This is easily the best sedan produced by Alfa Romeo. Over the years, we had some decent ones – though the original Giulia sedan should always be remembered for eternity, despite its GT coupe getting all of the attention during its heyday.

The biggest question will be how to Giulia stacks up against its higher profile competition. To answer that, do yourself a favor and drive all of them – and the Giulia. Your anticipation will be rewarded