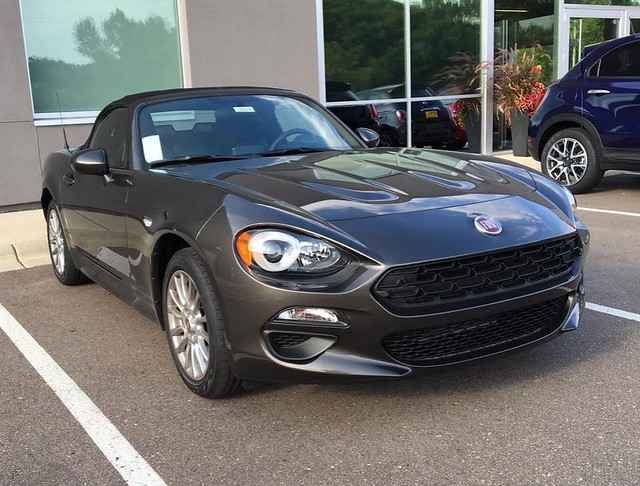 Which one would you rather have? The Mazda MX-5 Miata or the Fiat 124 Spider?

This is a question that has enthusiasts debating for the past year. To be able to build two iconic roadsters in one place, have them specified differently from front end clips to engines instigated a free-for-all leading towards this debate. It is difficult when you have the ND MX-5 created into what appears to be two distinctive cars.

For the record, I have not driven the Mazda version of the Roadster. I would have loved to, but the opportunity never presented itself. However, I did take a brief drive of the 2017 Fiat 124 Spider. Perhaps I could muddy the discussion a bit further.

Having seen, touched and felt both cars, it is clear that Fiat Chrysler Automobiles directed Mazda to do what they could to implement distinctions between the two. Obviously, the Fiat offers no KODO – Soul of Motion look both front and back and offered most of the Skyactiv architecture, along with associated transmissions and componentry. Instead of the KODO face, Fiat applied a pseudo-retro one that reminded me of the 124 Spiders of my youth. With LED-lined headlamp units, the familiar grille of the old Spider was a welcome sight upon a hood that was clearly influenced by the same Pininfarina-designed icons of the 1960s. Out back is a hodgepodge of Mazda and Fiat, even with specific shapes for the taillights and rear end. For today’s safety standards, the old Spider rear end would not work.

The tester I drove was the Classico – the bottom of the 124 Spider line. There is a pure look overall with this trim, again harkening back to the 1960s with its quick manual soft folding roof and rear glass. The alloys on the Classico were tastefully done for that modern touch.

Inside is purely Mazda. As with the Scion iA (OK, Toyota Yaris iA), Mazda's fingerprints are basically all over. Clearly, one can assume that Mazda is a winner in interior design and componentry. Only the Fiat badge on the steering wheel, the key and a few minor telltale Fiat touches invite the 124 Spider customer to accept this car on face value. Keep in mind, the 124 is devoid of FCA technologies and switchgear, such as UConnect. Instead, you get an unbranded version of Mazda Connect – which suffices for Fiat's needs.

No matter whether you see it as a Mazda or a Fiat…or both, it is a great interior. It is roomy for a big guy like to drive it with the roof up. There is headroom available, along with legroom to stretch out. The shifter, steering wheel, instrumentation and the infotainment screen are aligned well with my body. That means anyone else smaller than me will enjoy being behind the wheel in this roadster. The seats are also very comfortable – something that could be said in comparison to Fiat's other products. The same thing could also be said about the 124 Spider's quality, too! It is a better build overall. 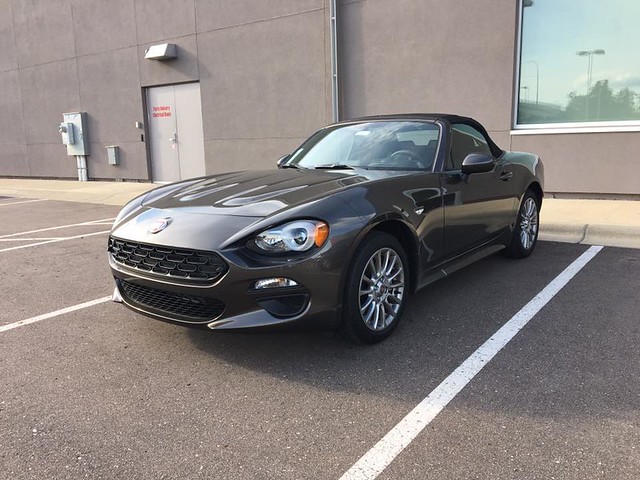 Underneath the hood is where the biggest distinction lies. Mazda offers a naturally aspirated Skyactiv engine for its MX-5 Miata. Fiat replaces said engine with their own Multiair 1.4 turbocharged engine. Where it gets interesting is the fact that Fiat's own engine has better horsepower numbers than the Mazda – 160 horsepower in contrast to 155. The torque is even greater with the Fiat coming in with 184 pound-feet of torque compared with 148. The Multiair turbo makes the roadster even livelier.

The transmissions are similar: A six-speed manual or a six-speed automatic. The latter is an Aisin gearset that really works very well. Aisin has done some great work with Fiat on their automatics, including the 500 Abarth. In the 124 Spider, it is absolute fun. Power goes to the rear wheels, which is always a plus for enthusiasts.

The driving experience is what I would expect from a MX-5 Miata. That I believe is what makes the 124 Spider fun to drive, because Mazda knows how to create a superb set of driving dynamics for its roadsters based on the idea of combination of a perfect 50/50 weight distribution and the "horse on rider" notion of integrating the driver with the car. This is actually what makes the Fiat 124 Spider more desirable. The ride may be a bit harsh, but it enables excellent handling through the curves. The steering set on absolutely on point with great response and maneuverability. Brakes are great, too. Expect excellent stops in normal and panic situations.

There is one thing to point out: The Fiat is heavier than the Mazda. A Classico with a manual transmission weighs in at 2,436 pounds. The overall performance from the Multiair turbocharged engine does compensate for the extra weight – and quite nicely, may I add.

The 124 Spider Classico starts with a base price of $24,995. To get the Classico I wanted, which includes the automatic transmission and the technology upgrade of a rearview camera, the larger infotainment screen and remote key system, I would be looking at a complete sticker price of $28,635. In comparison, I could get a Mazda MX-5 Miata Sport with an automatic for less, but I would not get a couple of features I mentioned. A fancier model of either car would scale the pricing up beyond $30,000. That would also include the Abarth version of the 124 Spider, inclusive of a power rise of just 4 horsepower.

Has this helped you in determining which Roadster you really want? Not exactly. Without driving the MX-5 Miata, I cannot make that determination as to which one is best. You might your mind made up. Or, perhaps you are undecided.

Eliminating the Mazda out of the picture, there is really no other choice for a two seat roadster that can be had for under $30,000. With that said, the Fiat 124 Spider is a very good choice. However, there is a bit of shopping advice I found – good luck getting a manual version. If you can find one, you are the luckiest person in the world. It is because of tight allocations and the demand for the manual transmission equipped Classico and Abarth models.

However, if you get to drive one – you will be duly rewarded. And, you could win this contentious debate over roadsters.