Just like the rest of the industry, Mercedes-Benz has committed themselves to selling SUVs and crossovers alongside their famous sedans, coupes, and cabriolets.

It took them a while to bring their vaunted G-Wagen to our shores – 2002, to be exact. Before that, Mercedes-Benz developed a softroader that was amenable for our tastes – the M-Class. This one was built in Alabama for global consumption. Let's be honest, it was made for American consumers than anyone else.

Two decades later, the question of whether Mercedes-Benz has the products to compete in the premium SUV/crossover marketplace. With Lexus and BMW dominating their respective segments, one would hope that a long-standing purveyor of luxury utilities has a lineup that would sway customers to the brand.

Case in point, the Mercedes-Benz GLC.

The GLC is in the most competitive segment among premium branded SUV/Crossovers. The compact sized utility is popular among upmarket customers, lead by the Lexus NX, Audi Q5, and Acura RDX. The image leader is the BMW X3, while the Range Rover Evoque and Land Rover Discovery Sport offer real capability for driving off the road. Plus, the segment has taken on new entrants from Jaguar, Infiniti, and Alfa Romeo to make this a crowded, but growing segment. 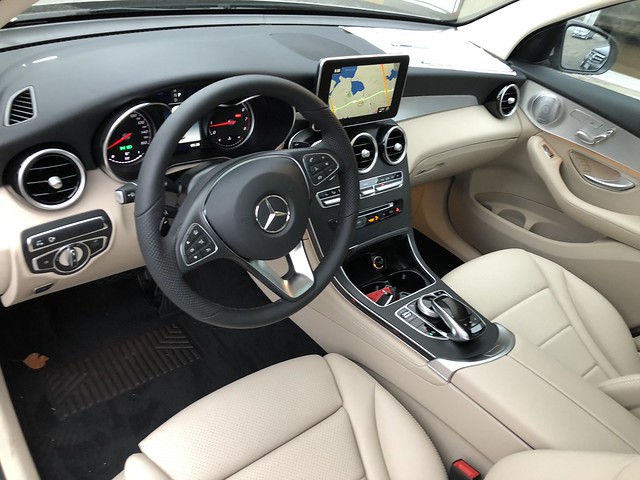 What about the Mercedes-Benz GLC? Is it still competitive in this growing segment?

A scan of the exterior shows a family semblance that exudes design continuity. The front end is shared with the rest of Mercedes-Benz's utility lineup, as are the rest of the silhouette and rear. Yet, if you're looking for design dramatics, the GLC will disappoint you. It is subtle, subdued, but classy at the same time. The rear hatch opens up wide and high, while the doors open up just enough for everyone to enter and exit.

The cabin also carries plenty of brand design continuity. It answers the question "you know when you're in a Mercedes-Benz, when…" The switches and controls are familiar, along with the instrumentation, screens, and overall layout. That also includes the console, which is crowned by the COMAND knob, associated buttons and the trace pad above it all.

There were some issues with the GLC's cabin. It was a bit difficult to get comfortable behind the wheel. The seats are not all that comfortable, to begin with. Plus, there were a few learning curves when operating several functions via the COMAND knob/trace pad and the infotainment screen, along with other functions around the driver. I am also not a fan of Mercedes-Benz's column-mounted transmission stalk. One could mistake it for being a wiper controller than a shifter.

My tester came with a 2.0-liter turbocharged four-cylinder engine, commonly found on several models in the Mercedes-Benz lineup – namely the C- and E-Classes. With 241 horsepower on tap, the engine is fine for the GLC. A new nine-speed automatic helps its cause greatly, thanks to undetectable shifts that are quick and enables the GLC to get up to speed smoothly. The 4MATIC all-wheel-drive system was equipped on our tester, which should help it get through the winter just fine. 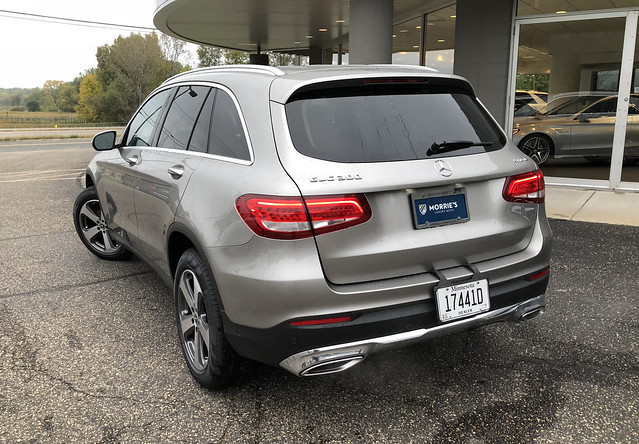 In terms of fuel economy, Mercedes-Benz said the 2019 GLC 300 4MATIC would get up to 22 MPG in the city, 27 MPG on the highway. I was unable to see what kind of fuel economy I got during my short drive in this vehicle

Ride quality is good, something that is expected from a Mercedes-Benz. I did find some roll in the corners, but that is to be expected from a softroader. The steering was fine with a bit of play on-center, but exacting movement in the turns. Putting the GLC in Sport + mode will weigh down the steering keeping it under control inside the lane. Brakes worked just fine with good pedal response down to the system.

There are two types of customers for the GLC. One is a customer who wants a premium compact SUV/crossover who is not married to a particular brand but want the prestige of what the brand offers. The other is a Mercedes-Benz customer who knows what they are getting when they buy one – regardless of prior model ownership or aspiration.

If you are of the latter, then you are already bought into the GLC as your choice for a compact SUV. However, the rest of us know we have a choice – whether or not we are married to BMW, Lexus, Audi, and so forth. Give the GLC a look, compare and decide. I’ll leave that conclusion up to you.