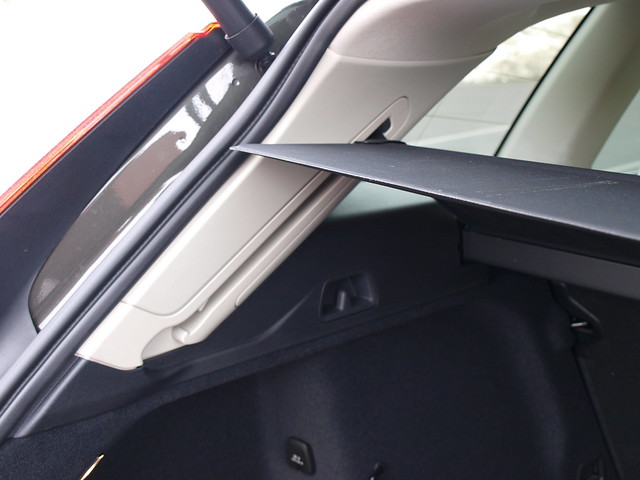 It’s tough when you give a publication "first rights" to a vehicle subject. It's even tougher when those vehicles are headline grabbers…and are superb!

This is the story of this batch "As Published Elsewhere" Quickies reviews. Vehicles that are found elsewhere with my byline, reviewed fully on those pages. They do find their way here because you want to know more about them. 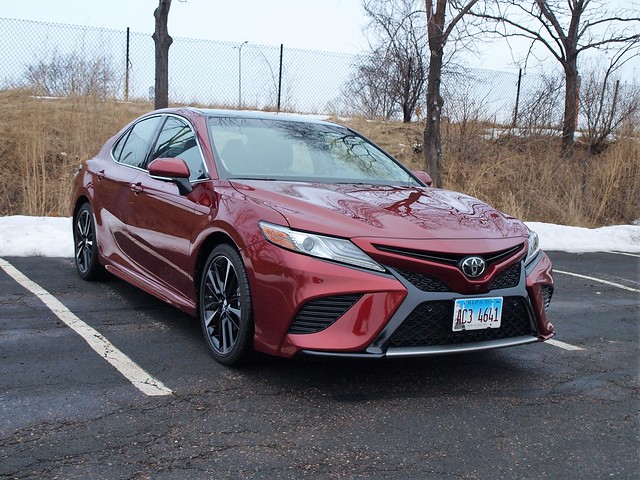 2018 TOYOTA CAMRY: My review of the new Camry began with giving light to the remarks made by Toyota CEO Akio Toyoda on how "sexy" this new generation model is. By "sexy," Akio was talking about its shape and the departure from an image imposed upon this highly popular sedan. Beauty runs skin deep – which should be the mantra of this new Camry going forward.

In short, this Camry is great. Then again, I worked with the top-of-the-line XSE sedan with its 301-horsepower 3.5-liter V6 engine. If you want a Camry that offers its best look, performance, and attitude, go straight to the top of the range. The rest of the package offers superb ride/handling even with a stiffer suspension than the rest of the lineup.

Inside is the most improved interior in Toyota’s history (so far). The seats are supportive and comfortable, the latest Entune system is treated to a night/day touchscreen and getting into the XSE means getting the largest and most informative screen in any Toyota instrument cluster. More so than a Lexus? Perhaps.

Not to mention it's good looks. Yes, I said "good looks" to describe a Camry.

The new Camry is indeed "sexy." It also elevates the model and the genre to new heights. If you felt that Camrys were boring and uninspiring – drive this and tell me, you still believe in that mantra. I would argue otherwise… 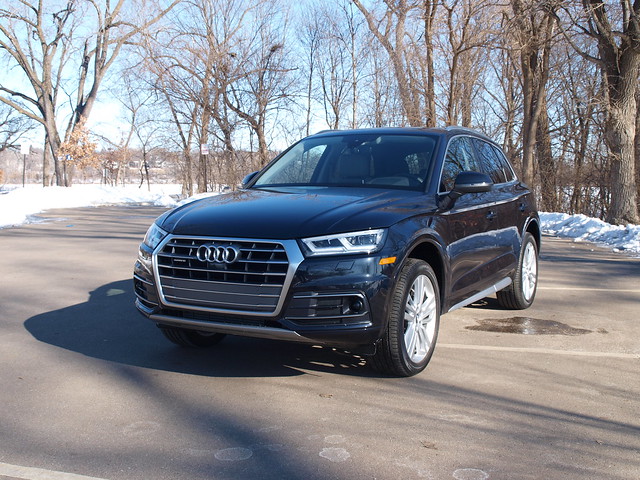 2018 AUDI Q5: The second-best-selling premium compact SUV in 2017 is a very well-executed vehicle that deserves its success. It does plenty of things well in contrast to its competitors. I questioned why it did not outsell the Lexus NX.

The handsome looks lend itself to a modern Audi interior. Combining shift-by-wire technology with the MMI infotainment system and Virtual Cockpit elevates this premium SUV and its attraction to its customers. Space is fine, and the front seats offer plenty of support. Rear seat passengers may watch the protruding hump of the driveshaft tunnel if you think they’ll squeeze three people back there.

Under the hood is the 252-horsepower TFSI 2.0-liter turbocharged engine, connected to an S-Tronic gearbox and Quattro all-wheel drive. The entire driveline is worth it providing solid power to all four wheels for improved traction and smooth shifting all the time. One change I would make is the tires, especially during the winter. More grip will help the Quattro system work better. The ride/handling mix is quite good.

This is a tough vehicle to conclude on since I know that the BMW X3 drives better and offers better space for passengers. I also know that the Alfa Romeo Stelvio offers more driver engagement in contrast to the Audi. Yet, people will buy the Audi simply because it's an Audi. It makes sense…sort of. 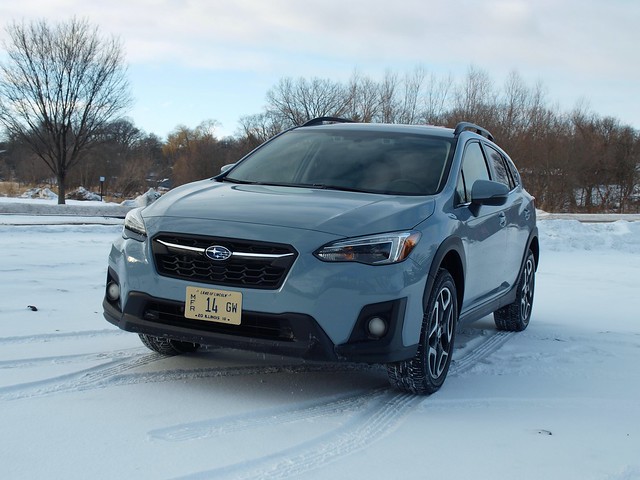 2018 SUBARU CROSSTREK: The newest generation of Subaru's Crosstrek is an absolutely superb winter warrior. It is also a great year-round vehicle that is made for adventure. As based on the Impreza 5-door, I wondered how much of this car is indeed a true breakout from the other.

One thing to note is that the Crosstrek has its own character. Even though you get the same interior layout as the Impreza, the same body, and the same engine, the Crosstrek offers a higher ground clearance, specific screens on their information displays, and other telltale signs of the Crosstrek’s character – including the specific front end and rear bumper.

The 2.0-liter Boxer engine is well-matched for the task at hand. The CVT is also a solid match and shifts extremely well for a band-and-two-pulleys transmission. Where it distinguishes itself is when you put the Symmetrical all-wheel-drive system in X-Mode. X-Mode enhances traction to all wheels and allows for greater control of ice and snow.

Every Subaru I get to work with shows a progression of superb execution upon each one. The size and agility of the Crosstrek provide a winning combination that will give crossover customers a solid choice against the competition. This Crosstrek is as real as it gets for the segment. 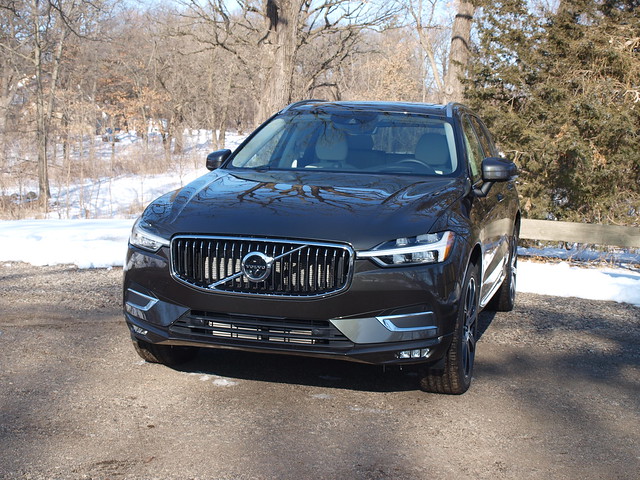 2018 VOLVO XC60: The 2018 North American Utility of The Year and 2018 World Car of The Year certainly lived up to its billing. It is a superb vehicle in its own right – which is truly a spoiler. Then again, the resurgence of Volvo has yielded some amazing new models with every new vehicle debut.

Let’s be specific here: for its class – the most competitive among premium brands – the XC60 simply hits all of the points with absolute excellence. Its design has character and three-dimensional details that make it stand out among the newest Volvo models. It is right-sized for the segment. Plus, it exudes loads of luxury in the Inscription trim, along with the additional goodies in this tester – the Bowers & Wilkins audio system included.

Where this XC60 stands out is the driving experience. The T6 driveline in this tester is beyond "just right." It is downright powerful and motivational. With this 2.0-liter four-cylinder engine, you have both a turbocharger and a supercharger – putting out a total of 316 horsepower. This offers no lag whatsoever. The rest is familiar territory: an eight-speed automatic and all-wheel drive. Plus, a smooth ride, solid handling, steering, and braking. Plus, loads of safety tech. In all, a great SUV!

As Volvo places more awards in its trophy room, their products continue to justify their accolades. However, the XC60 fits better as the right-sized SUV for those who only need the cargo space and luxurious accommodations for up to five people. This has been put on the top of the pecking order in my book.

DISCLAIMER: Vehicles featured in this article were provided by their respective manufacturers