We are now seeing the birth of a new vehicle segment in America. Are you afraid now?

You could be, but understand where this was coming from. It has been brewing for while – vehicles about 170 inches in length designed for urban use, despite having about 8 inches of ground clearance and available all-wheel drive for year-round duty.

Yet, this segment is not entirely new. Entrants have already been in place by Suzuki, Mitsubishi, Kia and Nissan. Suzuki has been in the small SUV game for decades. Its arrival in the Continental USA in 1984 with the Samurai was welcomed with curiosity, fueled by a seminal test by Consumer Reports that revealed a conflict between its center of gravity and overall cornering stability. The last offering was the SX4 crossover, which became one of its final products ever sold before the automotive sales division of American Suzuki was closed down.

This left us with three entrants – the Mitsubishi Outlander Sport, the Nissan Juke and the Kia Soul. They have been joined by a duet of General Motors small utes – the Buick Encore and Chevrolet Trax – along with the Subaru XV Crosstrek and the Jeep Renegade. For 2016, three new entrants have joined in the fun – the Fiat 500X, Honda HR-V and Mazda CX-3.

Though a few of these are not really considered part of the segment, they are truly joined at the hip. The customer base will cross-shop all of these entrants, even if they do not have the ground clearance of cargo space that should be commonplace in this class.

Why am I talking about these super-small utes? Through other outlets I provide content to, I have been reviewing these vehicles. So far, I've taken on four such vehicles. Perhaps I should do an overview of them to see what I think of this new segment now pitted for growth through the rest of this decade? 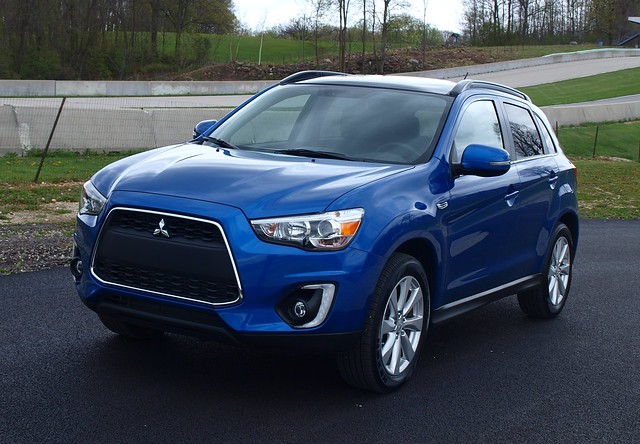 MITSUBISHI OUTLANDER SPORT: The Outlander Sport (also known as the RVR in Canada) has a lot going for it. It simply looks the part, and that is not a bad thing. Some complain that the design is rather dated. Say that to the folks that keep on buying them at a friend’s dealership in the Twin Cities. The Outlander Sport offers what the class really needs – proper ground clearance, a taller cabin, better side vision, some advanced technology and a lockable all-wheel drive system. The latter is an advantage worth considering, especially for those of us in the northern climes.

The version I drove had the newly available larger 2.4 liter four-cylinder engine. With the bump of 20 horsepower over the standard 2.0 liter engine, it helped the Mitsubishi's cause with better motivation. Highway driving has improved, despite being attached to the continuously variable transmission. Once Mitsubishi resolves the CVT, it should be a stronger contender in this class. Everything is fine. The interior is comfortable, some readouts and gauges were fine, the Rockford Fosgate speaker system pumps out serious sound, it rides decently and drives pretty fine.

Though it not exactly the elder statesman of the class, it is showing some age. Yet, the advantages the Outlander Sport has over its rivals may be its calling card. 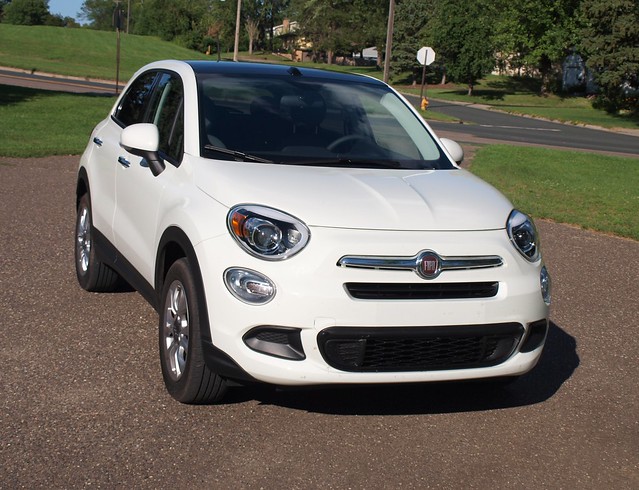 FIAT 500X: To induce a bigger sales catchment, Fiat needed to compete in the crossover market. The solution was to graft the 500's iconic styling onto a platform shared with the new Jeep Renegade. The solution is an Italian-made cute ute that is really…cute. The Cinquecento's signature design is handsome in this application, allowing for a huge liftgate and wide opening front doors. The interior carries a lot of the Cinquecento’s design cues with body-color matching instrument panel trim and seat designs. However, Fiat integrated a five-inch UConnect touch screen onto the top of their crossover's fascia and played around with its three-dial instrument binnacle to include a TFT screen and limited vision for both the speedometer and tachometer. Seating took some time to get comfortable, though I was hoping for more bolstering to lock me in.

The Easy version I drove had FCA's Tigershark 2.4 liter four-cylinder engine, which Fiat simply calls its Multiair II. The ZF-designed nine-speed automatic was attached to the engine. This yielded mixed results even with all-wheel drive. As with almost every nine-speed transmission equipped FCA vehicle, I found the lower gears to be hesitant on full throttle. In the mid-gears, the 500X was fine. It drive quite sturdy with some roll in the corners. Yet, it is one of the better driving models in its class in terms of overall driving dynamics. Of note, for those who want a real Fiat driveline may have to go with the 1.4 liter Mutliair turbocharged engine with a six-speed manual gearbox – which is only available in front-wheel drive.

In truth, the 500X has some redeeming qualities that would make it charming and worth the buy. A few fixes and the 500X should be a strong contender. 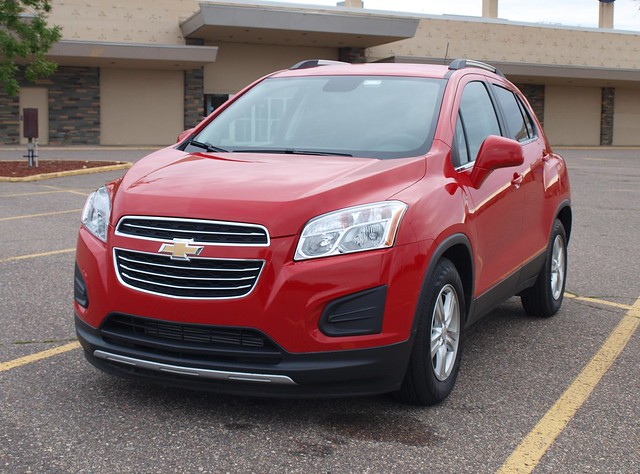 CHEVROLET TRAX: Though the Buick version came first, GM had the Chevrolet version in mind to sell in most markets worldwide. While developed mostly in the Republic of Korea, Chevrolet sold plenty of Traxes in multitude of markets – except for the USA. This was rectified for 2015 and sales for the Trax has been doing quite well. In August of 2015, Chevrolet sold almost 6,000 units in the USA. Perhaps it is because of its squat appearance that is tall and a bit awkward. It may be a good fit for other markets, but I am not quite sure when it is presented in various parts of our country. Yet, it works, with wide front doors and liftgate, decent rear seat access and cargo space. The digital instrumentation screen augments an analog tachometer, a paean to the Spark and Sonic it shares its DNA with. Seats are OK, though the LT's cloth was a bit wearing on me.

Only one engine is available – a turbocharged 1.4 liter Ecotec four-cylinder engine. Connected to a six-speed automatic, this driveline is pretty spunky and wants to go. Yet, heavy throttle for passing and getting on the highway reveals a sluggish side to the Trax. Handling, ride quality and maneuverability was decent. The LT model I drove had front-wheel drive. I was hoping to see the difference in ground clearance, but found myself wanting more – at least to compare with an all-wheel drive version.

The Trax is doing fine for Chevrolet, but buyers are expecting more when they come to the Bowtie's showroom. If they settle for less, the Trax will be just fine. 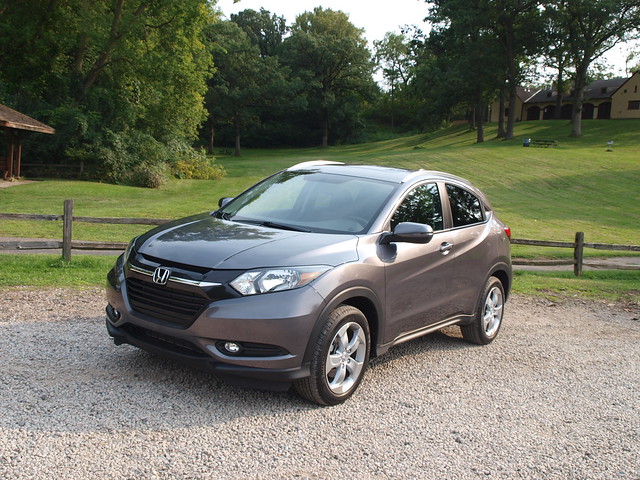 HONDA HR-V: Out of the gate, the HR-V was looking like the leader in its class. Then, sales started fizzling out, giving the Trax, the Kia Soul and the Jeep Renegade the class lead. There is no rhyme or reason, because this is one of the better vehicles in its class. Consider that the HR-V rides on the Fit’s platform and is powered by a Civic driveline. The result is a mix of design elements taken from various Honda models that actually make the HR-V pretty compelling. The C-pillar door latch for the wide-opening rear doors and its unique front end, make the HR-V standout, even as you look and enjoy the Fit-inspired cabin. Let us not forget about the Magic Seat cargo management system, which provides more options to carry everything from area rugs to tall plants…and, even, musical instruments.

That Civic driveline makes the difference. The 1.8 liter four-cylinder has 141 horsepower to work through a choice of a six-speed manual transmission or a CVT. My EX-L model had the CVT and all-wheel drive, which was a fine driveline to consider. It also rides well – the best in its class so far. Handling is pretty good, too – not to mention traction management. I could go on, but I felt that the HR-V had everything lined up for a group of four to enjoy a nice ride somewhere.

In all, its early success was no fluke. Seeing how Honda has been developing its crossover lineup, the HR-V should take off again in the next several months as the class leader again. 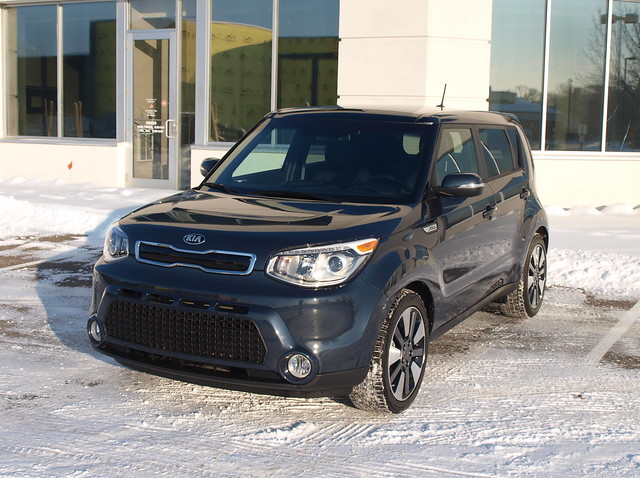 Previously, I had driven the Soul, XV Crosstrek, and the Juke. The Soul has the passenger space, but it lacks cargo space behind the back seat, a high ground clearance and an all-wheel drive option. The XV Crosstrek I drove was the Hybrid, which spoiled a very competent small crossover-wish vehicle. Had I drove the regular all-wheel drive XV Crosstrek, I would be singing the Subaru’s praises by claiming it would be the right vehicle in its class before considering cargo space. The Juke also has all-wheel drive, but it is more show than go. That is, unless you really want the NISMO RS model. Though I drove the Renegade briefly, I will be getting that and the Mazda CX-3 in over the next couple of months.

The reality is that vehicle offerings in the USA market are indeed getting smaller. Yet, size does not constrict accommodation and attainable performance. These crossovers are also becoming popular elsewhere in the world, showing manufacturers that it is possible to instill the idea that smaller could be better for American roads…and parking spaces.

I am convinced…somewhat. Yet, my preferences for crossovers run bigger. This piece isn't really about me…but of you. The consumer has to know that these subcompact crossovers are not really a fad. Even with gas prices dropping towards new decade lows, paying less to fill a subcompact crossover's tank is equally attractive to filling the tank of a much larger vehicle.

You see, there is really nothing to be afraid of.