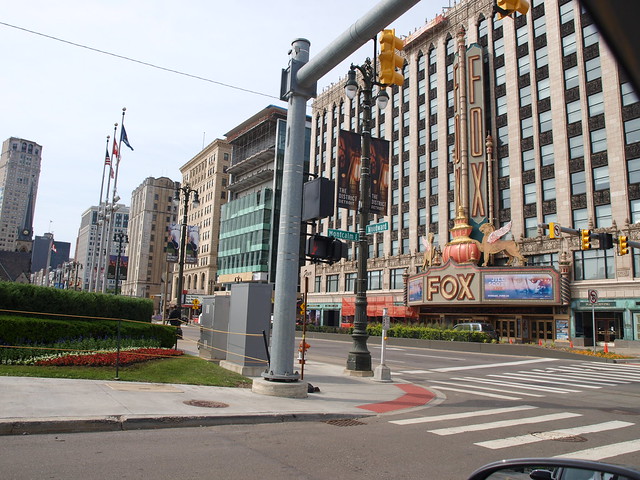 Twelve years ago, I arrived in Detroit for the first time. Being an automotive person, I felt that this city had been missing in my life. While the trip presented plenty of firsts and enabled me to hit almost every automotive location as possible, it served as a foretelling of the future.

I’ve done a few more trips to the Motor City since then. All on business – the North American International Auto Show in 2013, a couple of trips out to Fiat Chrysler Automobiles' Chelsea Proving Grounds, a drive to deliver several 2015 Hyundai Sonatas from Chicago to Ann Arbor, and an additional trip a few years to Motor City Pride (and, as a bonus, the Chrysler Employees Motorsports Association annual show). Each trip had a concentration on what I had to do at that moment. Every trip gave me a better view of the region where the American automotive industry is rooted and the history that emanated from it.

This year, I returned to Detroit for a regional drive event for Hyundai. They featured the 2019 Veloster and 2018 Kona on a couple of different drive routes that stretched from the city's core outward into Northern Oakland County. This particular three-day trip yielded the most eye-opening and illuminating impressions of a city that has been crawling back from its lowest historical point. 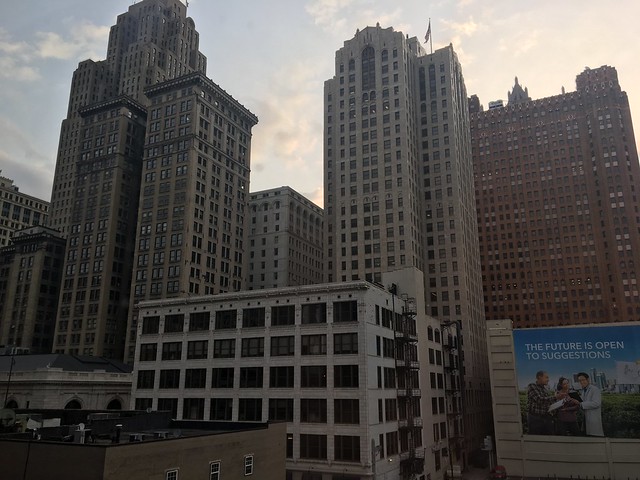 The 2006 trip yielded plenty of memories, but it also served as a starting point of Detroit's recovery. I purposely avoided the roughest spots of Detroit, except for trying to find a bar that catered to my kind in a scary part of the western edge of Detroit. I thought that this little pop-up was indicative of the city in decline. There was no desire to scout the city proper further, except for a few key spots around downtown.

This would be the temper of my 2013 NAIAS and 2015 Motor City Pride trips – stay within the confines of your host’s care (though a colleague’s drive along East Jefferson Avenue was an anomaly to the rest of these trips). On this Hyundai media drive, my colleagues and I had our vehicles out in the open. This yielded a lot of thoughts about this city.

Thursday’s drive in the Veloster took us to the far reaches of Southeastern Michigan's Oakland and Macomb County suburbia. In contrast, Friday's Kona drive. The former drive yielded a deviation that helped open up a few thoughts about the city proper. 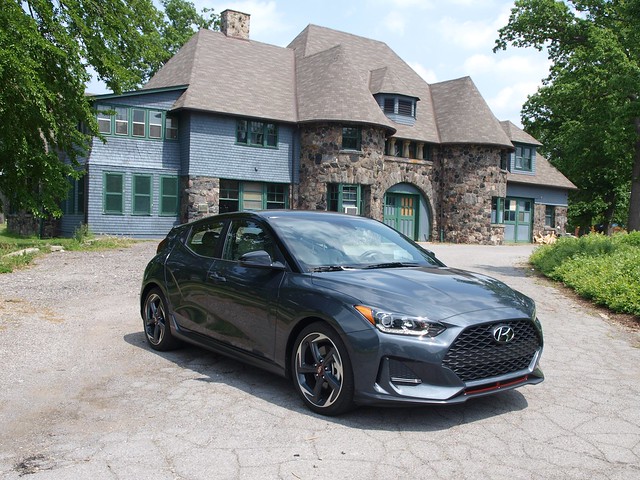 That deviation took us to Belle Isle. The weekend prior saw the running of IndyCar's doubleheader and IMSA’s stop on its circuit. While the southern part of the island park was blocked off due to track’s installation still in place, we found ourselves with a mix of the new and the need to be renovated. A photo stop at the former Detroit Police Department communications center saw how the city had an elegance that even its public services would enjoy. We also saw the Detroit Boat Clubhouse, that should be renovated again. Then, we saw parts of Belle Isle that have come alive again – the Detroit Yacht Club, new playgrounds, picnic areas, beaches, and forest preserves.

It also helped to have a veteran of the automotive media to be a co-driver in the Veloster. Thom Cannell's byline still appears in various publications today, but he reminded me of a past that I once read about as a child and young adult through colleagues now dead and alive. He also showed me a Detroit he once roamed during when he was a part of these great publications of my younger days.

Friday’s Kona drive yielded a deeper look at the city. It showed us how resilient the city has become as old mansions became homes of those working to keep the city alive. We drive through the Boston Edison neighborhood along Boston Boulevard. This was where Barry Gordy and his family lived as Motown emerged as a musical powerhouse in the 1960s. It remains a symbol of the reverence of its history with those fighting to keep the city alive and vibrant. Maybe this neighborhood will return to its former glory, but not through the crush of gentrification – but on the community’s own terms. 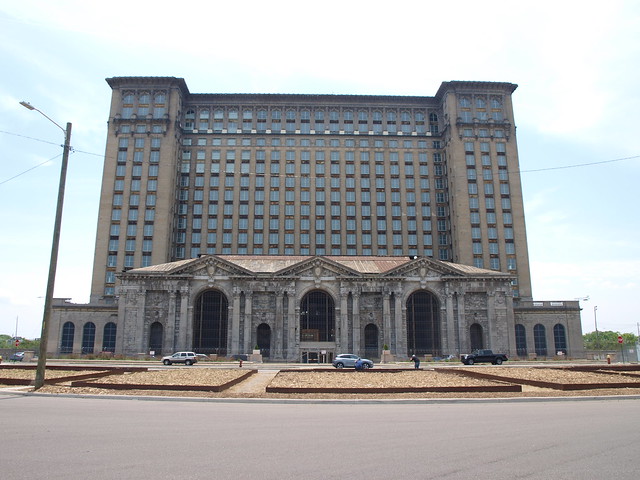 Gentrification was the theme of a similar stop later on that day. On a photo stop, we went to the Michigan Central Station in Corktown. This used to be the hub of the Michigan Central Railroad, where intercity services came to the Detroit. On top of the station is an eighteen-story office building that had 3,000 workers inside at its peak. By 1988, the building saw its last Amtrak train pull in. Through the possible help of the Ford Motor Company, the building is about to get a new lease on life.

It is unknown what would transpire at this most famous urban ruin. Yet, one should not see Michigan Central Station as such anymore. It is a formidable building – an oasis in the face of a vision of Detroit that had been in everyone’s field of view for the last few decades. Once reopened, it would serve as a new beacon southwest of the gleaming renaissance of downtown. 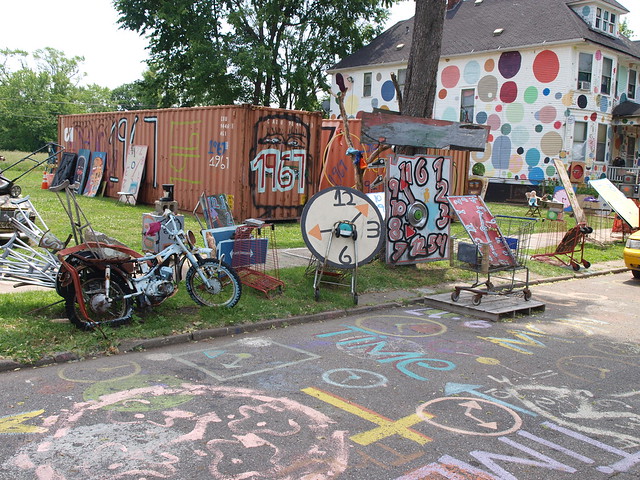 One thing that engages urban communities is its arts and culture. The Heidelberg Project is Detroit's example of how to take what was there and create something of beauty with the fusion of the imagination. There is nothing proper or fancy about The Heidelberg Project. You see abandoned homes turned into canvases of color, an old Saab 96 turned into a piece of art, many clocks telling us that time stands still on a block that keeps ticking with ideas. It is an easy run up Gratiot Avenue, with a bit of jockeying up Heidelberg Street to see the most colorful block this side of San Francisco. You might even get on Heidelberg Television and interview Kermit The Frog.

Our base of operations is a complete symbol of how much Detroit has emerged from its past. The old firehouse was once the party spot for Dr. Dieter Zetsche and DaimlerChrysler during the North American International Auto Show, prior to company’s selloff to Cerebus. Today, it has become the best hotel in the city. 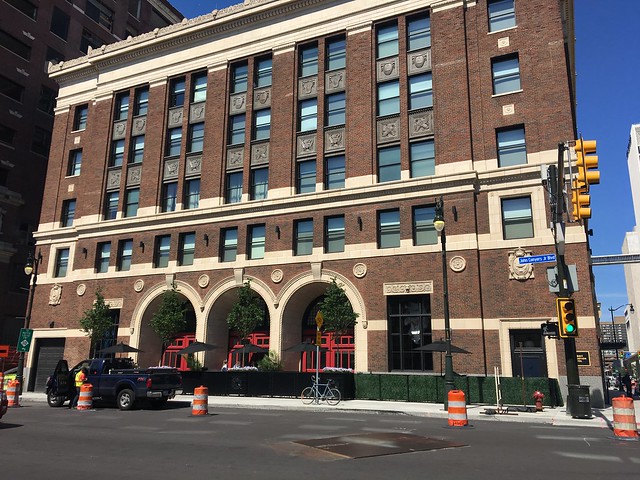 The Detroit Foundation Hotel has been transformed into a lovely boutique accommodation with high amenities and style. This is perhaps one of the best places I stayed at – ever. The overall hospitality was friendly and absolutely wonderful! And, yes, I will recommend staying there.

If one stop told the story of the "new cool" of Detroit, it would be courtesy of one of its biggest music stars – Jack White. Uptown has emerged as the hip part of Detroit – somewhere between Wayne State and the renovated former General Motors corporate complex on Grand Avenue.

Third Man Records is one of the last places in the USA that presses records. Yes, actual vinyl records. In fact, they have made records from live recordings in the main room. The fact that this place exists is a sign of how much music still means a lot to the city of Detroit. We should always be reminded, as is the staff at Third Man, of how Motown, Shady (Eminem), and other Southeastern Michigan artists still make this place a sonic beacon for up-and-coming artists. The place itself welcomes new bands who are looking to do recordings and pressings of their music. 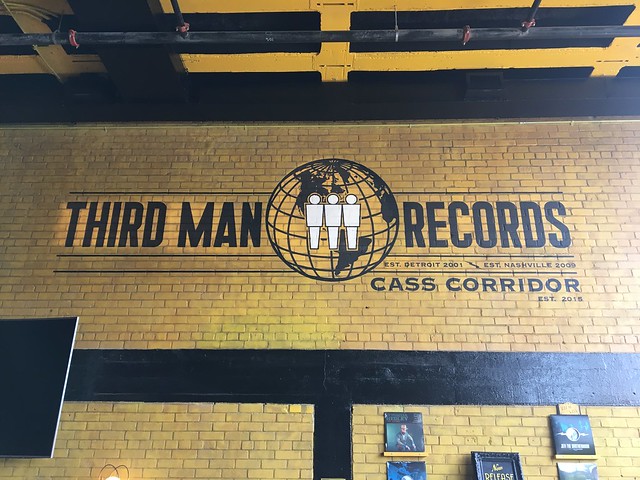 What this latest trip with Hyundai showed me was a deeper appreciation for Detroit. By driving deeper into the communities that I avoided on previous trips, it helped to understand the place as it rebounds from its lowest ebb. It will take some time for the rest of the city to catch up with the rebirth downtown.