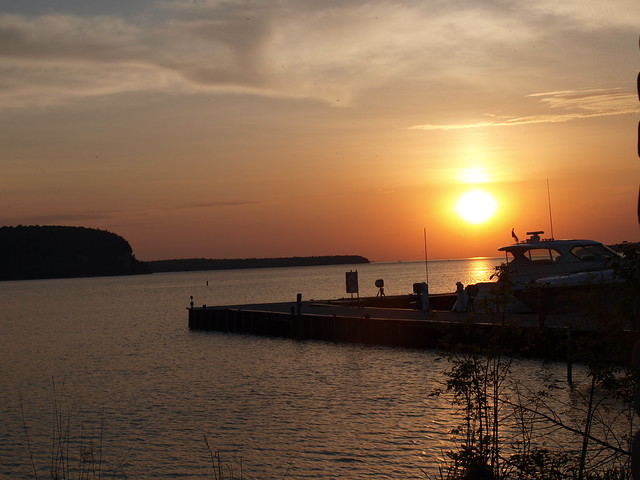 The idea of a "romantic getaway" should be one where the locale and the company should be equally romantic.

Let me back up for a moment and personal here. Yes, I am in a relationship – albeit a long distance one. I've known Jason for 16 years – we thought we were cute when we saw each other on our regular commute on Madison’s Metro bus system to our mutual employer. We became friends 14 years ago. We got closer every year since. While we dated other people, there was a chemistry happening that eventually got more intense and deeper over time.

Still, 338 miles separate us – me in the Twin Cities, him in Southeastern Wisconsin. How can we bridge the distance? Making the effort to plan visits and enhance them further.

While I was in Wisconsin for the 2018 Midwest Automotive Media Association Spring Rally at Elkhart Lake, I decided to bookend the media confab with spending more time with Jason. The plan was to head up for a "romantic getaway" after my return from Road America. It would be our first such getaway as a couple.

We came up with a choice of two locations: Chicago or Door County, Wisconsin. Since I have not been to Door County – ever – and it’s been a decade for him, it became our destination over a long holiday weekend.

There were plenty of factors that came into play for the decision go up to Door County. The deal maker was the fact that the Door County Visitor Bureau advertises in an LGBT publication in Madison. They also promote tourism for us on their website, so Jason and I would feel absolutely welcomed up in the northeast of Wisconsin. 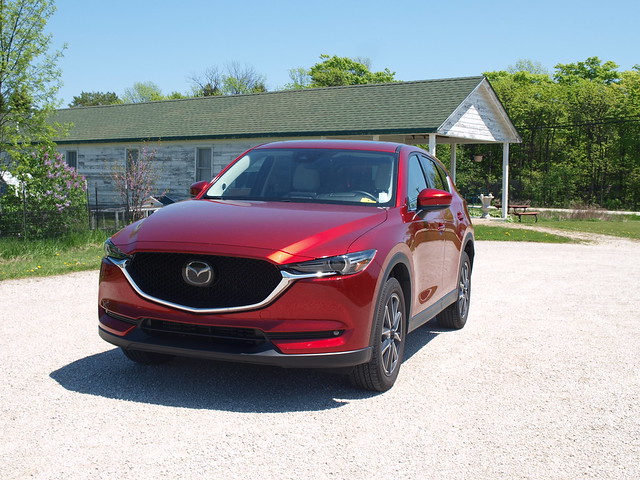 I drive back from the MAMA Spring Rally in a 2018 Mazda CX-5 Grand Touring AWD. Mazda gave its blessing to use the vehicle for this romantic getaway. I think we chose the right vehicle since it had the right combination of performance, fuel economy, space, comfort and ground clearance for the kind of adventures we would partake in.

Our plan was to leave Saturday and spend more time out on the peninsula. However, Jason had a mission to fulfill. He took delivery of a new-to-him car to replace the heirloom he inherited from his mother. Soon, that 1999 Mercury Mystique leave his underground garage for a 2014 Toyota Avalon XLE Touring. That took up a chunk of time during the afternoon.

After bringing Jason's Avalon to his home, we quickly turned around and headed to Door County. We loaded the Mazda CX-5 with our luggage and a few other things for the long drive through downtown Milwaukee and parallel to the Wisconsin shore of Lake Michigan.

When we left his place in Mukwonago, it was around 91 degrees Fahrenheit. It remained in the high 80s and low 90s through our run up Interstate 43 into Green Bay. It was certainly hot, partly cloudy, and a bit humid. 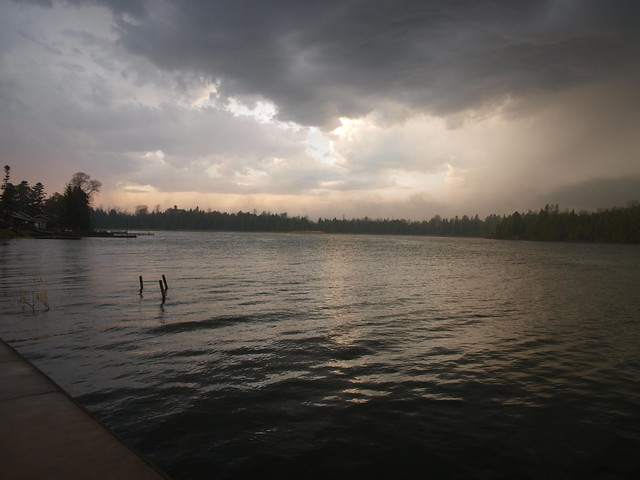 As soon as we crossed the Door County line, the temperatures began dropping. The further north we drove along the peninsula, the clouds loomed angrily in our front view. Lighting struck somewhere beyond our destination. Raindrops began falling on our CX-5. As we drew closer to our destination, Rowleys Bay Resort, the rain fell so hard that visibility was challenged.

Our arrival was past 7:00PM on Saturday evening. The rain let up. Jason and I checked into our room. It was a nice king-sized bed with a whirlpool as an added bonus. Our building was a three-story annex next to the main resort building, with the property lined up with cottages, campgrounds, and lovely grounds. 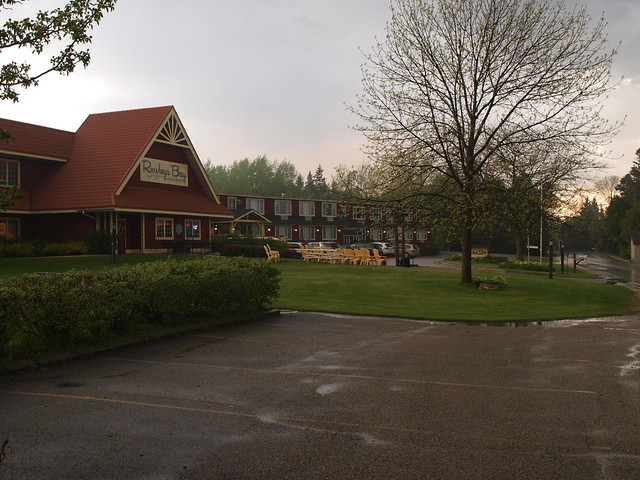 Our window gave us a view of Rowleys Bay, a large water respite from Lake Michigan. We had a set of docks with a public boat launch for mainly smaller craft. Next door to the docks was a place where you can rent kayaks to go out into the bay, along with a zip line. Jason and I looked at each other and passed on the kayaking and zipline activities.

Our arrival agenda was simple: relax and explore. Being a Southern California native, bodies of water entice me. It is not an invitation to swim or take a watercraft out onto the water, but rather a calming and joyous experience to celebrate the shoreline. This would be the theme for the rest of the weekend in Door County – the idea of being near a shoreline. 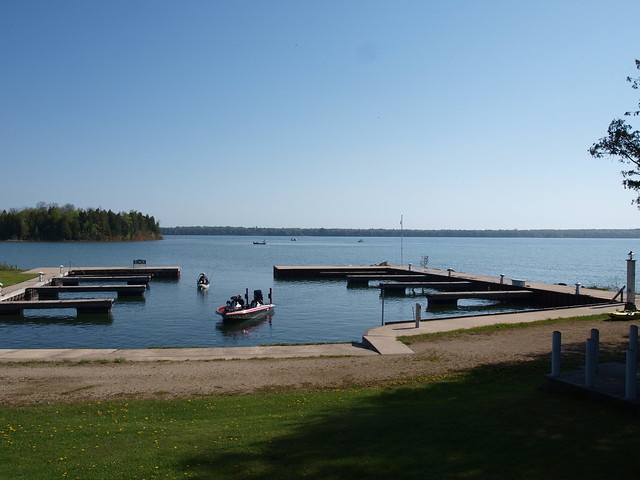 After the stormy welcome, we woke up to an absolutely beautiful Sunday morning. The energy from the sun and sky was amazing. We never saw anything about 85 degrees wherever we went. Both Jason and I did our best to protect ourselves from the UV rays and flying insects.

Our first stop after a small breakfast from Grandma's Swedish Bakery at Rowleys Bay, we took the Mazda CX-5 up towards the "thumb" of the Door County Peninsula. Our attempt to check out the car ferry to Washington Island was thwarted by a very long back-up on the highway. Our Plan B was to see Gillis Bay, which was the landing for the passenger ferry across Death's Door. 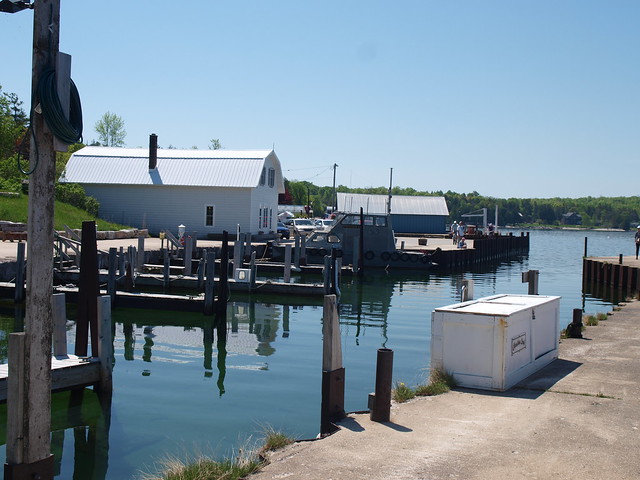 Have you heard the story about how the waters between the island and peninsula were named the "Death's Door?" There were two Native American tribes that were at war again each other – The Potawatomi on the island; the Winnebago on the peninsula. The first attack from the island resulted in canoes capsizing and warriors drowning. The next attack came from the peninsula, where the same fate happened. The area had been ripe with shipwrecks not from native peoples, but of everyone else who tried to navigate the rough waters at the southern mouth of Green Bay into Lake Michigan.

Our next step was Newport State Park, where another beach welcomed us. It was a short hike onto Newport Bay where the beach and cove were welcoming. 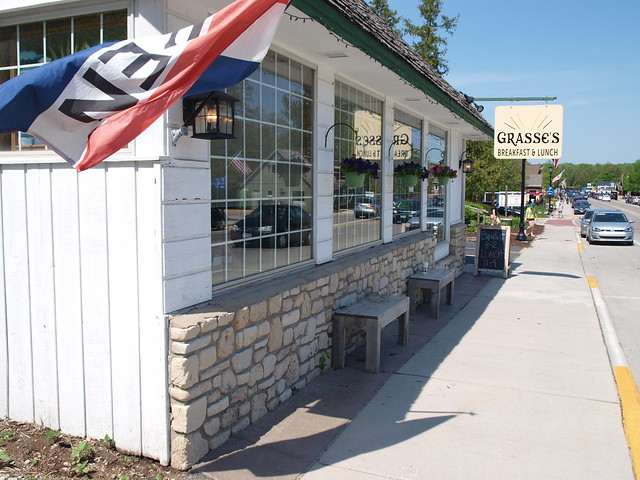 For a late lunch, we stopped back onto Sister Bay. We perused the restaurants along Highways 57/43, and wound up at Grasses, which was actually listed on the Door County Visitor's Bureau website under "brunch." This place served up great food in a very cool atmosphere. Jason liked, as I did.

It is worth noting that down the highway in Sister Bay was Al Johnson's restaurant. If you look up at the grass roof, you will see two goats grazing on it. Though we never had a meal there, it was worth watching! Many of the tourists in town wholeheartedly agreed. 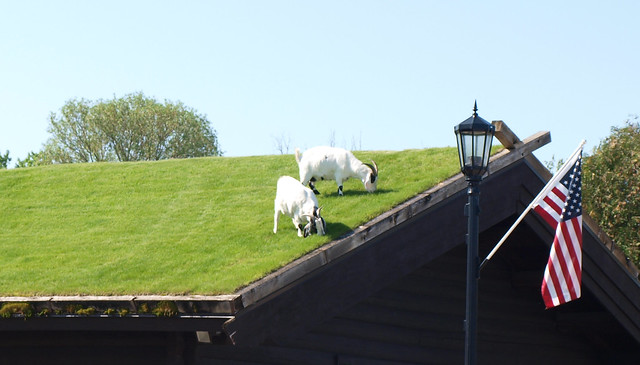 As I have been trying to keep weight off and lighten my sugar intake, I caved in for the locally made ice cream. A survey of three ice cream shops within a few doors of each other leads us to the Door County Ice Cream Factory Scoop Shop. A couple of single scoops of chocolate with hard chips on waffle cones were great treats for us to enjoy on a warm Sunday afternoon.

Another food theme to talk about is Door County's bumper agricultural crop – cherries. When you have a confection with cherries, or a drink, or another food, how do they taste? The truth is that cherries are supposed to be tart. Jason was introduced to a locally produced cherry juice that was indeed tart, as intended. He bought a bottle of the juice up in Gillis Bay and had a glass of one at Grasses. Over dinner at the Viking Grill in Ellison Bay, we had a slice of cherry pie as part of our dinner. We both remarked that the pie was not only delicious but tart as it should be. 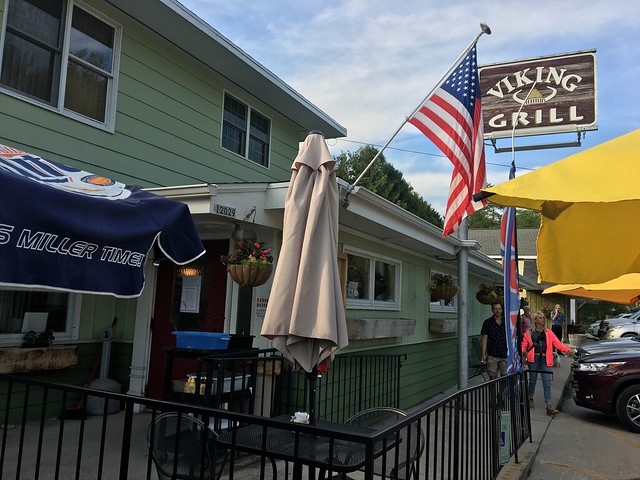 The Viking Grill stop came after a break from driving around. It was extremely convenient to Rowleys Bay, so Jason and I took advantage of quiet and friendly dinner service. The special came with a lot of food – roaster chicken, mashed potatoes, stuffing, cranberry sauce, cole slaw, and the aforementioned slice of cherry pie. We both also enjoyed our dinner.

On a spur of the moment, Jason and I headed down Highway 42 towards Ephraim to check out the town. What transpired was a lovely sunset that danced with the cloud cover off in the distance. We just sat there. Though I wanted to take off, Jason made sure I stayed until the sun disappeared into the bay. He also had plenty of doggy time…yes, Jason has a thing for dogs.

We only had two nights to enjoy Door County. We made our way back to Mukwonago with a drive through Sturgeon Bay. As the county seat, Sturgeon Bay is where everything you need is there. We both saw one of the smallest Younkers stores right in the heart of the downtown core. It is sad to see one of the mid-line department stores go out of business and fear that the loss of Younkers will leave a huge gap in town and the county. The sad fact of the change in retail shopping habits leaves places like Younkers to leave behind only memories for its customers and its community.

However, Door County residents can still count on Target and Walmart, along with Walgreens and CVS – all right in Sturgeon Bay. We got lucky with the Piggly Wiggly in Sister Bay when we needed items to keep us going for our stay at Rowleys Bay.

For us, we had a lovely time in Door County. We found that the people – locals and tourists – were friendly and did not pry as to who we were. We did notice other LGBT tourists and some symbols up and down the peninsula that confirmed our being welcomed up there. That is a sign that we were comfortable in our travels up there. 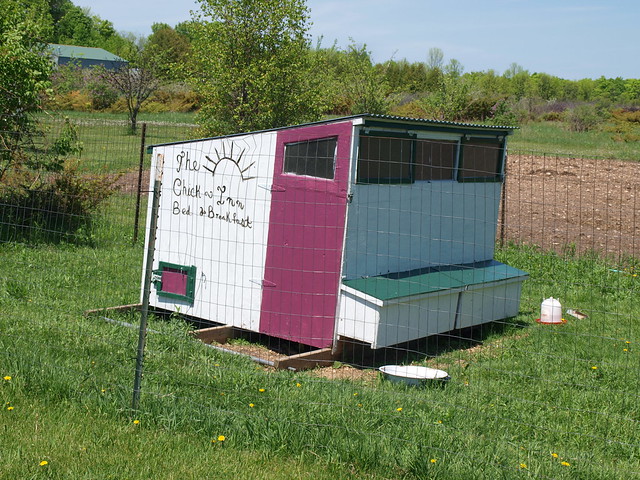 Do I…well, we…recommend Door County as a getaway from spring to fall? Absolutely! If you haven't been, start with the Door County Visitor Bureau website and search for ideas of what to do during your visit.

Our first "romantic weekend" together was a wonderful one. We may have a few more up our sleeve. As we both say, "let's go with that…"

DISCLAIMER: The vehicle featured in this article was supplied by Mazda North American Operations. All other expenses – lodging, fuel, food, etc. – were paid by Victory & Reseda.