When a road trip falls in your lap – not literally, mind you – do you simply go?

I was presented with the idea of joining a group of friends/fellow car folks, taking a convoy of vehicles to drive – or ride along – through the night to arrive into a city I have never been to.

To be fair, I really do not have any choice of where to go, because it was their idea…and it was somewhere I have been waiting to go for years.

The result was a "day trip" to a Waffle House in Kansas City, Missouri. While it is this group of car folks’ third such adventure. I just went along for the ride.

Who are these group of car folks? I've known some of these folks for a few years since being around the car community. One of the organizers of this junket was Erik Berger – one half of the MotorCult podcast. His brother Scott also organized this trip. Among others in this convoy was Ryan Senensky (MotorCult, Japanese Nostalgic Cars, and – for a minute – V&R), his girlfriend Jana, my friends Marcy, Mike, Jordan, Ellie, Peter, Cory, and Karlie.

It sounds like a great group of folks to do a road trip with. They have done this before. I figured, ”why not?” I could use an adventure such as this…

On a personal level, this trip accomplished two things. It is my first time in Kansas City. I have always wanted to visit and have attempted such a trip several times over the past 33 years. One such original intention was to see some pitcher on the Royals who just happen to be from a rival high school of mine. You probably heard of him…Bret Saberhagen? I never got the chance to see him pitch at Kaufmann Stadium (it was called Royals Stadium back then) but I did see him on the road against the Oakland A's. Saberhagen is still around – retired from the game, but still involved with the Kansas City community.

The second accomplishment I made was that I added a new state to visit – Kansas. Granted this was a trivial point, but one that is important in ensuring that I keep up on some travel benchmarks along the way. I always said that I should visit a new destination every year. It also seems that adding a new state to visit should also be part of that goal. Last year was South Carolina. This year…Kansas. Funny how things like that work. 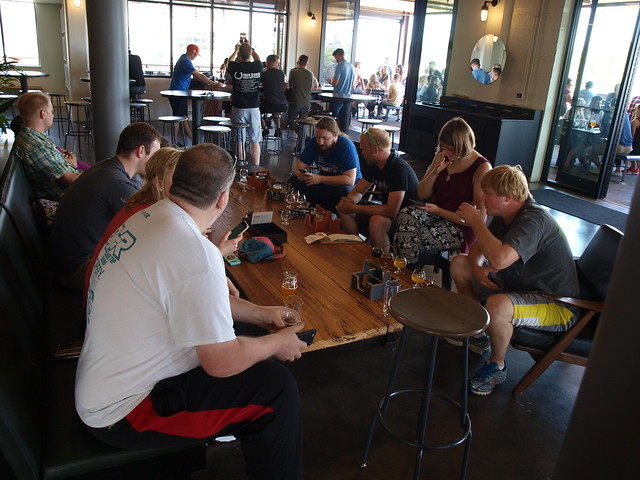 Since this group has done this twice before, I trusted them to get us through the wee hours of Saturday on Interstate 35 southbound through three states. In this case, I was not driving. I left the 2018 Kia Sportage I was working with at our departure point and trusted Marcy and her Ford Focus ST to get our carpool onward past Des Moines into Kansas City.

We all gathered at Erik's place in St. Paul for the 2:30 AM departure. The plan was to get into Kansas City to a Waffle House by 9:00 AM, then on to several stops in and around town.

Our convoy was a hodgepodge of vehicles. Erik and Scott brought their father's Mercedes-Benz W220 AMG S 55, while Ryan and Jana took their 2006 Toyota Sienna and Peter in his Mercedes-Benz C 300. With walkie-talkies in each car, we were ready for the six-plus hours to drive southbound in the wee hours of the night and morning.

With a couple of fuel stops and bathroom breaks, we made it to the Waffle House in Liberty, north of Kansas City. I understand the attraction to this chain of down-home restaurants. We Upper Midwestern people are attracted to places that we do not have in our backyard. We will go to Los Angeles for In-N-Out Burger, Dallas-Fort Worth for Whataburger, Boston for real New England Clam Chowder…and so forth.

Understand that Waffle House is not just about the food, but the atmosphere. It is “Southern Hospitality” wrapped up in a small diner. I like the food. It is the symbolism that I enjoyed more.

After our breakfast, we made a beeline through downtown Kansas City into the state of Kansas. We headed to the monthly Cars and Coffee event in a small town of Stillwell off of US Highway 69 south of Overland Park. The StoneGate Motorplaza is a garage condo complex that is looking to grow, based on demand. It reminds me of the newest AutoMotorPlex location in Medina, both of which aspire to be as on the level of Chanhassen's garage condo complex.

The Kansas City Cars and Coffee was being held as we arrived during its last hour of this monthly event. We did some unique vehicles that are not seen up in Minnesota. However, it gave us some indicator of the car scene in Kansas City. We did see plenty of Chevrolet Camaros and other tuned imports coming northbound from US-69, with a concern that we might not see much left upon our arrival. We weren't disappointed – Malaise era vehicles and a few exotics included.

Since the group has an affinity for microbrews, our next stop was Boulevard Brewing Company in Kansas City's Westside South neighborhood. Since I am mostly sober, I did not partake in their selection of brews. My friends did. It appears that they loved it! There was also a great cool and hip crowd out on a milder Saturday midday. I have to admit to loving the atmosphere at Boulevard Brewing.

By the way, you can do tours of the brewery, get food, and just chill while looking towards the Kansas City skyline. If I wasn't entirely sober, I would be adventurous and try some of their beers.

After a long discussion over beer and other non-alcoholic beverages, we headed for our final meal stop on the Kansas side. Joe's Kansas City Bar-B-Que is an institution in this community. We were lucky to dine at their original location – a former gas station. One thing to consider is that there is always a line getting into the place – that eventually snakes to the order station, where you can get your food rather quickly. It is also a small place, that turns over customers quickly in the dining area.

I will admit that I was a bit daunted by the line. Part of was that I was hungry – no, scratch that, hangry. First thing for anyone visiting a new city and its very popular spots is to never come hangry. Secondly, before you question whether the line makes this place worth this wait – take a deep breath. I wasn’t able to, sadly. Yet, I stuck with it. And, yes, it was definitely worth the wait in line. This is some really damn good Kansas City barbeque – at a very affordable price!

While I was in line, I was looking at my options. It seems that the intersection of Mission and 47th was a culinary oasis. To their credit, some of my friends saw that I was hangry and went off to do some Pokemon – which was a cover for going across the street to Taco Republic and getting me a very good ground beef taco. Aside from Taco Republic, there was a Neopolitan pizza place and what looks like a good local fried chicken joint. All four places have been noted for any such return to the Kansas City area.

Our final stop was to a Krispy Kreme in Kansas City, Kansas. It falls under the idea of going to places we do not have back home, but I did question this stop. I mean, if you wanted Krispy Kreme so bad, why not drive out to their store in Clive, Iowa near Des Moines? It's the closest one to us. But, our group decided to have them make dozens of Original Glazed Doughnuts to take home. Yes, they fresh when they left Kansas City…

I have to admit that there were other things I wanted to see and visit while I was there. Yet, their agenda and schedule did not match those wants – despite dropping hints and suggestions. Sure, it would be awesome to see Union Station, the Negro Leagues National Museum, the American Jazz Museum, the National Airline History Museum, Country Club Plaza, Crown Center, some places in Westport, take in a Royals or Sporting KC game…

That list alone may require another trip down to Kansas City. Perhaps on my own (or, with Jason…if he wants to) and in our own vehicle (or take RideKC’s network of transit options). Maybe in the future sometime…

However, I learned a lot going with this group. If something comes up – don't be afraid to say something. It is better to do so without judgment. Plus, infuse ideas to make this trip worth it. That's just a starting point.

Let me thank Erik, Scott, Ryan, Jana, Marcy, Mike, Jordan, Ellie, Peter and Karlie for making this trip enjoyable and full of new experiences. Oh, and thank you for the hospitality, Kansas City!