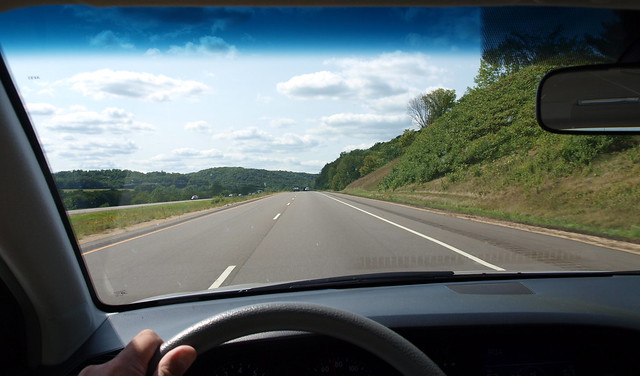 It was the August of 2009. I remember getting into the office of the job I had for four years and noticed a strange energy around it. About half of the staff left our office, leaving myself and other people in similar positions behind. Then, we were summoned to our conference room.

I was among a dozen or so who were laid off from my company. In the middle of an economic slow down. I was escorted out of the office with my final check and a paid cab ride back home.

It took a few moments to process it. I knew that jobs were scarce, even in an economically strong area. But, I also knew that I still had my graduate studies, my final payouts and an unemployment program supported by the Federal government to get me through this deep recession devoid of job prospects.

However, I knew that if I did not do something that would make me happy – at least temporarily – I would not come out of this economic slump in a healthy state.

When you have time on your hands, you get to do the things you've been meaning to do when you didn't have the time to do them.

So, I began to travel.

In the period after my layoff, I covered four states and hundreds of miles of road. Mostly, it was for the benefit of connecting with friends. Other times were made to satisfy the curiosity. I did get to scour some new roads and places along the way in the process as well as return to places once explored and, on occasion, exploited.

Where have I been? And, how much of it has changed over the past eight years? 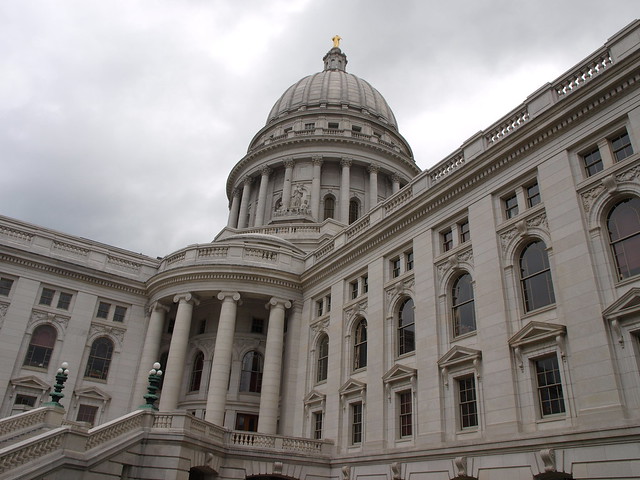 WISCONSIN: It's not a small state, mind you, but I did cover a lot of it in an extended weekend. My friend, Jason, lived outside of Madison, just a mile from where I used to live from 2000 to 2002. Upon his invitation, I visited Madison. I decidedly took a different route through Rochester, Minnesota and La Crosse as a way to orient me away from the normal route of Interstate 94. A few nights in Madison, along with meeting another friend, Glen, in Janesville and a day trip to Milwaukee for a Brewers game added context for a state I once called home. As a bonus, I went home through an unfamiliar route via Wausau and out through Eau Claire. This extra routing helped to cover some new ground and inspired some further explorations in the weeks afterward.

Wisconsin is an annual destination for me, thanks to the work done with the Midwest Automotive Media Association. I have since changed my drive routes, because my friend has since moved southwest of downtown Milwaukee. I also had a chance to meet a recent friend in Appleton, further shaking up my Twin Cities-Elkhart Lake drive. It continues to be a yearly voyage, with the visit of my good friend in Waukesha County. This next trip to see him, I will make sure to revisit the city of Milwaukee – it has been eight years since my last time there. Oh, and recently, I picked up a slew of new friends in eastern Wisconsin to also visit, as well.

It is a lovely state to visit, with great landscapes and places to see. Plus, great local beer and dairy products. As much as I do side with my Twin Cities neighbors in comedic antagonism towards Wisconsin, I actually do enjoy it. Visit it sometime – anywhere is fine. 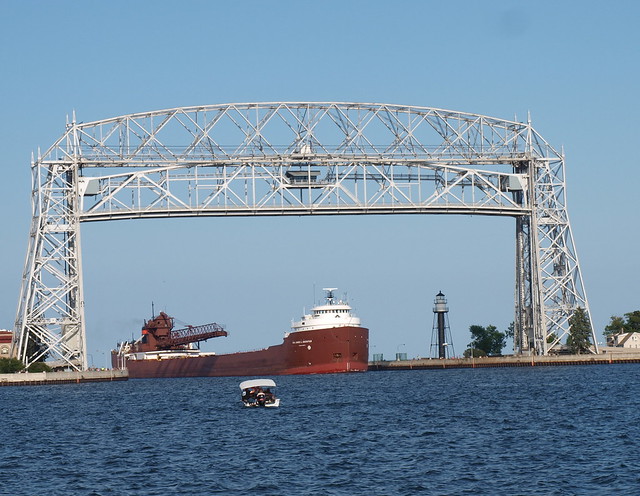 DULUTH: A couple of former friends moved from one side of Duluth to the other into a new apartment. In lieu of being employed, I offered to help them with the relocation. Upon arriving at their new place, I found that they moved a vast majority of their items over there. Using my vehicle, we made another two-and-a-half more trips to get the last of their stuff as they began the work of making their place home. In the past couple of years, I made my way to the Twin Ports area more times than I've anticipated.

Duluth is a great place to visit from spring to fall. Winter may be a challenge depending on the weather. When you have parts of the city that remind you of San Francisco, with its hilly streets above the shores of Lake Superior, you know you have good company. The down side is that summer equals high hotel rates and low vacancies. Twin Cities people will like to stay longer than a fortnight, but a day trip is doable. It is a two-and-a-half hour drive between downtown Duluth and either Minneapolis or St. Paul.

Any recommendations for Duluth? How about everything? If you can swing the hotel rooms, stay and do a day drive up the North Shore towards the Split Rock Lighthouse. Or, towards the Apostle Islands in Wisconsin! 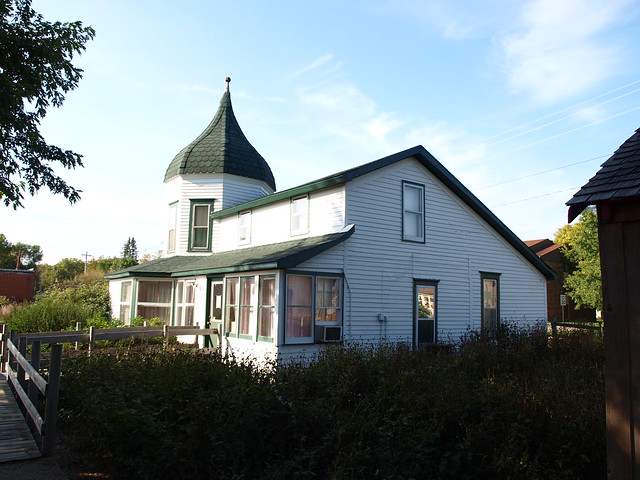 WALNUT GROVE: Back in elementary school, we studied the works of Laura Ingalls Wilder. At the same time, a television series began to air based on the childhood memories of Ingalls Wilder – a series beloved by viewers and educators alike. The fame from the series prompted a small town in Southern Minnesota to take pride as the childhood home of the famous author. Granted, it bore no resemblance to the backdrop of the TV series in Simi Valley. It was a flat town with a railroad running alongside of it. Still, to be in the presence of Laura Ingalls Wilder and his legacy was a fantastic experience.

The town is still there and should be a stop for any trip across Southern Minnesota. If you love the books, the television show ("Little House on The Prairie") or of Melissa Gilbert and Alison Arngrim…just stop the vehicle at Walnut Grove! 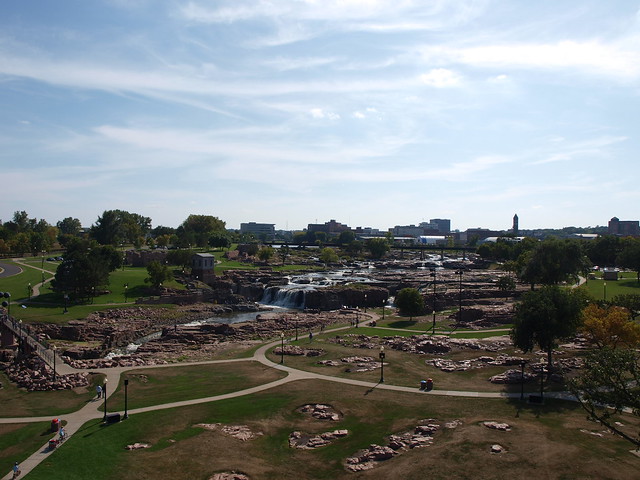 SOUTH DAKOTA: I always have an annual goal to visit a new and completely different place. Luckily, there are still a few places left within a half-day’s drive of home. I also need to remind myself that I no longer on the East Coast where I can go to a lot of places within the same amount of time as I would to Duluth. Sioux Falls is a four-hour drive from Minneapolis, which is doable for a day trip. Through the falls of the Big Sioux River running past downtown, a city takes shape with a glimmer of vibrancy seen in the Upper Midwest. Then, I explored further along Interstate 29 into Brookings and out along a series of rural highways to make my way back into Minnesota. Add another state to my map!

I have been back to Sioux Falls since. Downtown is vibrant and offers great choices in dining. You can explore further in the state to Vermillion and Brookings – both college towns on the eastern side of the state. I will admit that I have never crossed the state into the Black Hills and Rapid City. Anyone on a quest for an awesome road trip should do the crossing across the state. I heard you will be rewarded when you reach Mount Rushmore. 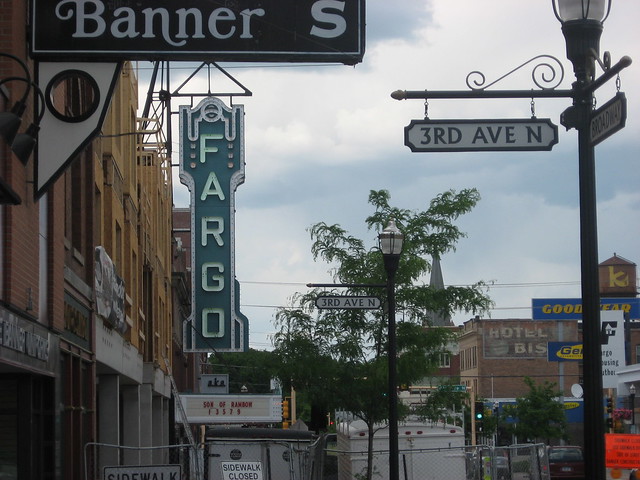 NORTH DAKOTA AND MORE: For some interesting reason, I often find North Dakotans friendlier than South Dakotans. I also find Minnesotans familiar as I do North Dakotans. One of those North Dakotans was Bryan, a playwright about to leave for Los Angeles in a couple of month's time. This adventure into North Dakota was about finding inspiration in my creative endeavors. It was good to return to the friendly folks of Fargo, but I wanted more. So, I headed up through Grand Forks, turned right onto U.S. Highway 2 towards Bemidji and heading downward towards Brainerd, St. Cloud and home. Going through the Bemidji-Brainerd Lakes region reminded me that there is a lot of Minnesota is absolutely beautiful in contrast to the flat and prairie farmlands that I've witnessed mostly in my travels through the place I call home.

Let me break this section down further. First off, my playwright friend has since passed on. I have met other good folks in the Fargo-Moorhead area who have made that destination worth visiting again. In fact, it was a focus of a vehicle and technology review in 2014. That trip – including visiting Fargo-Moorhead Pride – deepened my appreciation for Fargo and its community.

However, I have not been back to Grand Forks in eight years. It is worth revisiting, especially its wonderful downtown by the Red River. It is a college town, which gets really vibrant when the University of North Dakota is in full session. 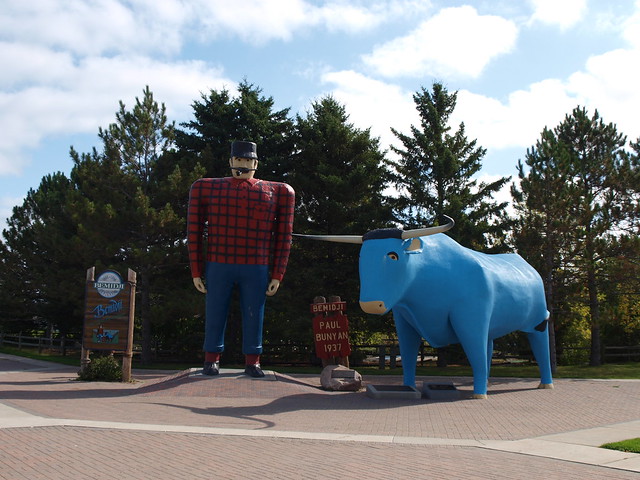 Bemidji is also another town I missed visiting. It is another lovely, quaint community that is worth exploring, especially in the summer. See the big Paul Bunyan/Blue Ox monument, but stay for the Northern Minnesota charm!

Lastly, Brainerd is a great place for that week on the lake. However, it is also home of the state's big motorsports venue – Brainerd International Raceway. Between drag races, motorcycle and sports car events, it is worth visiting to check out the atmosphere.

The point of these trips was to explore places – old and new – and discover their charms without the guilt of time and money. Today, I see them as great getaways from The Cities worth exploring further. These destinations are as fresh today as they were in 2009.

So, just get out there and explore! I'm not too far away in joining you…