Ten years ago, I attended my first Twin Cities Auto Show. It was my first since moving to the area. I had no idea what to expect, but I was certainly excited to go.

Luckily, I worked in downtown Minneapolis on a temporary assignment with a major corporation. I left for the Minneapolis Convention Center after I was done with work. It was a short walk on the Skyway, but every block was worth the anticipation. Arriving there, I saw all of the exhibit halls open up to accommodate almost every brand sold in the Twin Cities market. Flashbacks to auto shows from Los Angeles to Washington to Chicago welled up inside as I went from exhibit to exhibit, just taking it all in.

My best memory is kept from a photo taken by a marketing team with Chevrolet. It was me inside of a red C6 Corvette convertible. I do remember spraining my ankle coming out of the car. The photo still looked pretty darn good.

Over the past decade, I experienced my fair share of milestones attending and working the Twin Cities auto show. It was in 2011 when my career took a huge leap, thanks to meeting with regional public relations representatives from Chrysler and Toyota. The latter gave me my first press car loan and an invitation to join the Midwest Automotive Media Association. Those moments have led to what you read today on this site.

Since becoming a credentialed member of the media, I have seen this show grow, evolve and adjust to the needs of everyone. Camp Jeep became a huge hit with attendees since setting up for the first time in 2013. Having a presser for the Gates 311RS – a completely tuned version of the Mitsubishi Lancer Evolution GSR – in 2013 showed what Minnesotans can do to be a part of a greater car community and industry. It became a place where media can interact with the manufacturers, dealers and suppliers to the industry right in our own backyard – instead of having to travel to Chicago, Detroit, Los Angeles, New York and so forth.

In this ten-year anniversary occasion, I am proud to be doing more with the Twin Cities Auto Show. This would be the first time that I witnessed the "move-in" of the vehicles. I was invited a few years ago to do so, but the day job got in the way. Since I am freelancing, I made sure to make this a part of what I do this year. 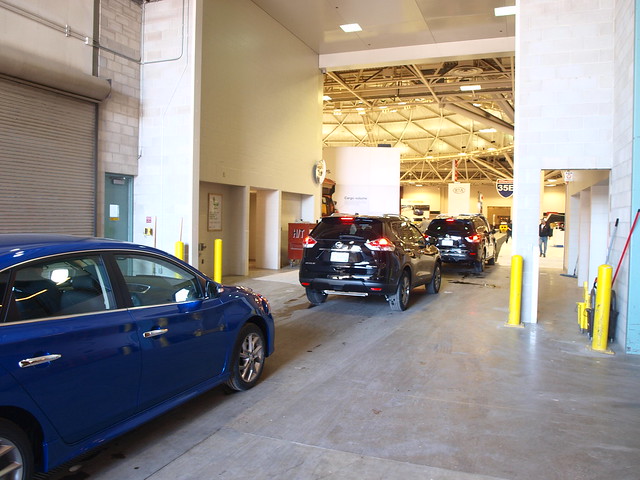 Another change at the show was scheduling the Media Preview before the doors opened on the first day of the show. This was an opportunity for all of the media – myself included – to get a good view of the show before the general public get to see what is on display. Included this year were a few press opportunities – including a special edition of the Gates 311RS called the Spec Blew and a look at Ford's newest crossover/SUV products.

My main goal every year is to see what is being shown that was on the floor at the other shows I attended – this year, being Los Angeles and Chicago. Not everything will be on the floor, considering the most desirable models were shifted to either Geneva or another U.S. auto show. There were several running at the same time as the Twin Cities show.

Was that goal met?

Actually, yes. At one of the doors, visitors would be greeted by a huge surprise – a 2016 Ford Mustang Shelby GT350 R. This was introduced at the North American International Auto Show in Detroit as part of a focus on performance by Ford. This version looked similar to the GT350 I saw in Los Angeles, but had two distinct differences. The most visual was the carbon fiber wing on the back and an "R" badge inside the cabin. To get this at the show will light up a lot of imaginations throughout the week. On the move-in day, the GT350 R was burbling and roaring as I made it way from the loading dock onto the show floor. You knew this was going to be the biggest attraction throughout the run of the show.

Yes, but there is a Hellcat to see, too! Fiat Chrysler Automobiles anchored their Dodge brand exhibit with the Charger SRT Hellcat – in TorRed. The talk about the supercharged V8 SRT model has not calmed down. The imagination of a 707 horsepower car at its astounding price ($60,000-65,000 base prices for both the Challenger and Charger editions respectively) still sparks conversations about it. Having a Hellcat on display is huge for this market with its deep enthusiast communities and interest in performance automobiles.

Also positioned in front an entrance is a 2015 Alfa Romeo 4C Launch Edition in white. This is the first appearance for Alfa at the Twin Cities Auto Show since its return. Readers of V&R know of my experience with this Alfa – from its fitting in May at Road America through its first drive at FCA's Chelsea Proving Grounds in June. 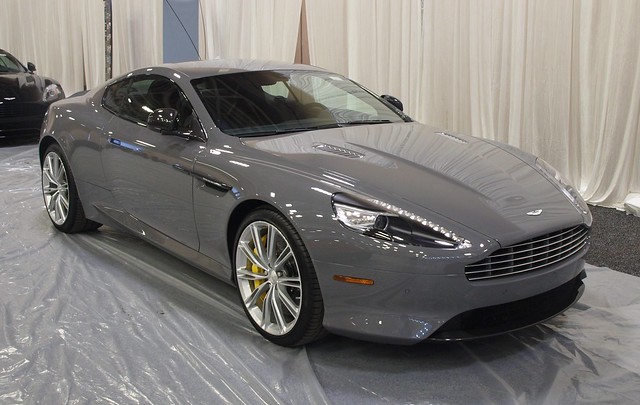 This year, Maserati joined the main show floor with its entire lineup shown behind the velvet rope. However, Luxury Lane also moved to the main show floor with two new additions – both Aston Martins. Morrie's Luxury Auto in Minnetonka became the first Minnesota dealer ever to sell the British sports car brand. These two developments are both signs that the upper end of the market is still growing here in The Cities and Upper Midwest.

While sports and performance cars delight the crowds, there is a reality in the marketplace fueled by a growing economy in Minnesota and adjacent Upper Midwest states. One point that was made leading up to the show is the market itself. Minnesota is the only state where there is the highest percentage of sales for trucks, crossover and SUVs – 60 percent of all deliveries. This not only justifies the increase in sales and interest in crossovers and SUVs, but it shows how unique Minnesota’s market truly is. With the combination of old money, new money and a huge propensity for outdoors activity all year round, it makes sense that the emphasis on crossovers, SUVs and pickup trucks is made at the show. A look around each exhibit is evidence of market trends in this market.

This was one of the points made in my conversation with Steve Whittaker of Whittaker Buick-GMC in Forest Lake. Whittaker is this year's Auto Show Chair. He was both in a celebratory mood thanks to sales increases with his brands, driven by the Buick Encore and the GMC brand. GMC recently announced an expansion of spending on advertising marketing and additional products over a ten year period, bolstered by market trends on trucks, crossovers and SUVs. Whittaker was ecstatic over this recent development – something that will help his dealership located north of The Cities greatly.

This position almost did not happen for Whittaker. When General Motors filed by bankruptcy protection, his dealership was put on the list for closure. There were several events that complicated matters for Whittaker to stay in business. Prior to concentrating on the Forest Lake location, the dealership closed their long time St. Paul location in the Midway/Frogtown area. Then, the Pontiac brand was shifted to the Old GM assets to be eliminated from the company's portfolio. As a family business, Whittaker was trying to keep the doors open, even if new cars were not delivered to be sold for a year’s time, according to him.

Whittaker wondered if there was anyone at Renaissance Center he had to convince to keep his dealership from closing. He did get help from Scott Lambert and the team at the Greater Metropolitan Auto Dealers Association who went to GM to ensure reinstatement of the store. Today, Whittaker is enjoying renewed success thanks to the efforts of GMADA to keep this family-run business going now that both Buick and GMC are focusing on growth for their brands.

Another fact about Whittaker – he is a deep enthusiast. We both have a common love for Holden-built cars and he has two Buick Regal performance models form the 1980s – a Grand National and a GNX. We Minnesotans have our own flavor when it comes to the cars we love.

Whittaker and other family-owned and operated dealers are the flame-keepers in this market. They share the same space as the chains – Luther, Morrie’s, Walser, Lupient, Rydell, and so on. Each dealership has their own way to ensure customer satisfaction towards after sales happiness. But, which dealer would you rather buy from? Ultimately, the customer will discover their answer by the way they approach the car buying process – something that could be initiated on the floor of the Minneapolis Convention Center. 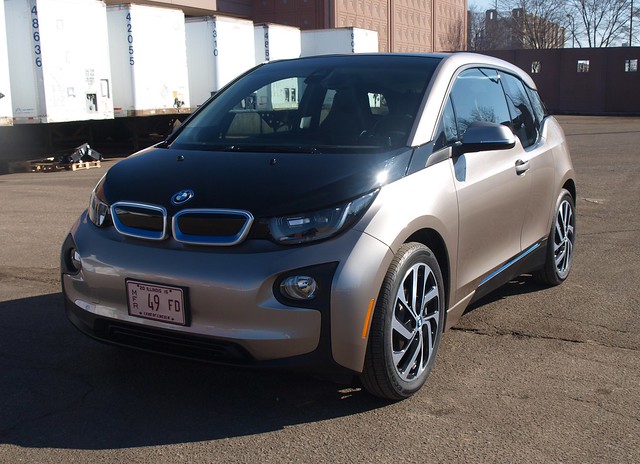 One attraction that engages consumers to the show are the Ride & Drives. This year, the Twin Cities Auto Show had four – Toyota, Ford, Mazda and BMW. I partook of the BMW drive as they promoted the i3 city car. The i3 is an interesting vehicle – especially the one I drove, a Terra model with the extended range engine attached to its electric motor. I will say that BMW is on the right track in terms of sustainable transportation through the "i" sub-brand. The i3 itself is an interesting design study in itself. However, it drove as well as a BMW should. That alone should be worth the price of admission – some complained even too high for what it is. The justification is this – it is a BMW after all.

During the time before the show opened, one observation was made – and agreed upon by show veterans. I concur that in my ten years of attending the Twin Cities Auto Show, this is best one yet. Not because of the shift in locations of the Luxury Lane and the "progressive" positions of each brand – luxury on one end to affordable on the other. It is an extension of the celebration of the industry witnessed at Detroit in January. Minnesota's economy is still growing and automobile sales are going strong – both reflections of a market that is now focused on cultivating the crossover/SUV as part of the majority of this marketplace. It also shows the growth in the upper end of the market, as luxury vehicles continue to gain momentum in The Cities.

Ten years ago, I saw an auto show that fit the market well. Today, it continues in the same vein, more of a reflection of the region's economy. The excitement is still there, ten years on.