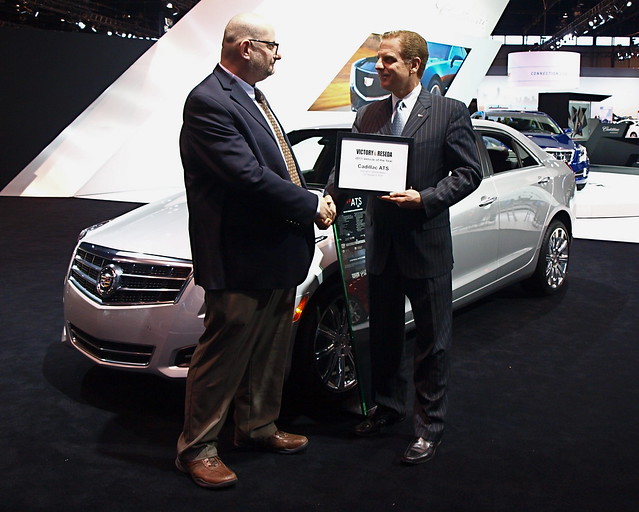 The 2013 Vehicle of The Year Award hand-off to Dave Leone for Cadillac at the 2014 Chicago Auto Show. Photo by Victory & Reseda

The eighth time could be the charm!

Soon, we will announce the Long List for the eighth Victory & Reseda Vehicle of the Year award. Every year, this award gets elevated towards becoming one of social media’s top automotive honors. Last year, that award was presented to General Motors and Cadillac for the ATS. I had the privilege of handing over the award to Cadillac's Chief Engineer Dave Leone at Chicago Auto Show this past February.

After the award has been handed off, a full evaluation on the format, metrics and process is undertaken. Improvements are made to ensure a smoother award evaluation process. These improvements are implemented for the coming VOTY season. It is that simple.

The Long List will consist of vehicles that were for a full review only from November 1, 2013 to October 15, 2014. These reviews will have appeared in Victory & Reseda. No vehicles driven or written at events or as Quickies are included in the Long List.

The Long List will not include former winners of the VOTY, unless the vehicle has been significantly changed from the last award.

The candidates on the Long List will go through an evaluation process based on date from each review. Evaluations go through each review to glean metrics from exterior design, interior space, ergonomics and comfort, driveline and performance, driving dynamics, fuel economy and pricing. Scores are tabulated from a 1-5 scale – 5 being best – and added up for a total score.

Two additional evaluations are added to the score. One is based on feedback on each vehicle by the readers. The more feedback a vehicle gets, the better the score – also based on a 1-5 scale. No feedback essentially means that no score is given to the candidate. Second was instituted last year where a panel of independent colleagues will review the Long list and select their choices amongst the candidates. A complete score is tabulated for each candidate.

The ten top scores will be nominated onto the Short List. These ten nominees will appear on an online ballot – driven by SurveyMonkey – for a public vote. These votes will be added to the total score. The highest overall score becomes the 2014 VOTY.

October 15: The Long List is complied and announced. Evaluation process conlcudes. The Panel will submit their input from the Long List.

October 22: All scores will be compiled. The ten finalists will be announced on the #Motorama Live Twitter chat show! The Public Vote will commence at 10:00PM ET.

October 29: The 2014 Victory & Reseda Vehicle of The Year will be announced on the #Motorama LIVE! Twitter chat show at 9:00PM ET.

The award will be given out at the 2014 Los Angeles Auto Show during the Media Preview Days in November. Expect a lot of Facebook and Twitter traffic, along with posts on this site, promoting this year's VOTY. There is a hashtag to follow: #VOTY14. We will also have some partners helping to spread the word…

With the improvements made from previous years, the 2014 VOTY should be one where there is a real winner in the end. Not to discount all six previous winners, but the idea of the VOTY being a social media-based award lends to one important element in the process – you.

Be ready for October!