How did the Buick Regal achieve victory in this year's #VOTY?

The process of distilling 27 nominees towards one winner began with an evaluation of all the nominees. This was accomplished through a compilation of data from each and every one of these vehicles. Technical information was calculated along with actual results of testing. The biggest result is with fuel economy since it weighed strongly with today's fluctuation of pump prices that scaled over $4.00 a gallon for regular petrol in the USA. Then, each nominee had their exterior, interior and set of driving dynamics scored based on degrees of merit. There were subcategories for each to ensure that no stone was left unturned.

Scores for each section were given on a 5-point scale. Even with the scoring schedule, I found that the most difficult part of the scoring was to find a happy medium between the trucks, the SUVs and the run-of-the-mill automobiles. Surprisingly, there were some levels of parity amongst the different vehicle types when the scoring finally shook out in the end.

After the mathematics was complete, a not-so-surprising entry was sitting in first place: The Buick Regal – with 68 points. Also, not-so-surprising was the Lexus IS coming in second in the evaluations within a bumper at 67 points. With just two points away in third was the Saab 9-5 (65). Even the Chevrolet Silverado HD came in just three points from the top with 64. If this quartet at the top of the heap came as a shock to you, you were not alone. Comparatively speaking, the close race that developed at the top of this year’s VOTY was better than the tie that persisted in 2007 between the Hyundai Sonata, Toyota Prius and Toyota Yaris. I'm certain that some hardcore enthusiasts would have preferred this year’s "Top Three" to 2007’s. (NOTE: The Hyundai won by a single vote)

In all fairness, the "Top Ten" should be disclosed as well in the pre-public vote scoring. Underneath the Regal, IS, 9-5 and Silverado HD were (in order of scoring) the Chevrolet Cruze (62), Cadillac CTS (61), Chevrolet Camaro (60), Chevrolet Volt, Hyundai Elantra GMC Acadia and GMC Terrain (all four with 57). Since General Motors had the lion share of the 27 nominees – 12 in total – the "top ten" certainly reflected their dominance in this year’s VOTY race.

The question remained whether the tight race between these vehicles would hold up in the public voting. It did, but an interesting turn of events occurred as votes were equally distributed amongst most of the 27 nominees. The only exception was the top public vote-getter – the Fiat 500. A groundswell of support gave the return of the Italian brand to North America a boost to challenge the "top ten."

In the end, one car had just enough votes to break the tie from the evaluation portion of the VOTY equation. Though the voting served for a tight race between the Regal and the IS – at some points during the voting, they were tied with each other – the margin of victory was still a slim one for the new VOTY. 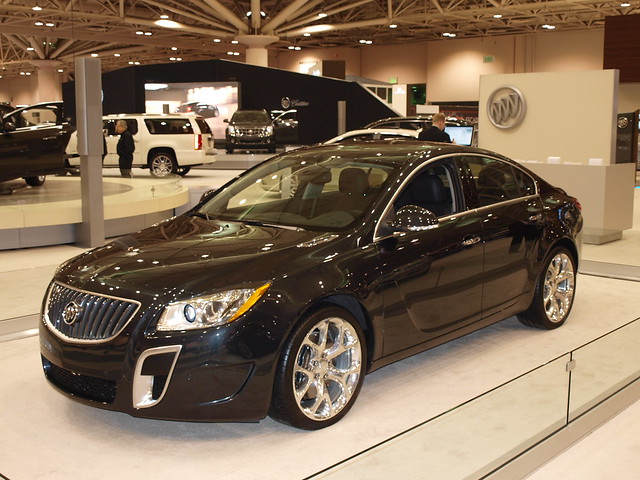 The Regal won by a single point – 71 points total. Fair and square.

Rounding out the #VOTY's final "top ten" – public votes included – were the Lexus IS in second place with 70 points, the Saab 9-5 with 66, the Chevrolet Silverado HD (65), Chevrolet Cruze (64), Cadillac CTS (63), Chevrolet Camaro (61) and the Hyundai Elantra with 59 points. The Chevrolet Volt and GMC Acadia rounded out the top ten with 58 points each.

There are plenty of lessons learned from this year's VOTY process based on the changes. Anticipating a greater variety of nominations going into the 2012 award with a better balance of manufacturers represented, I can see where the current format would not fit well in evaluating each vehicle driven in a 12-month period and incorporating a public polling along with it. One such adjustment being considered is to narrow down the number of nominees to a short list for the public vote based on the scoring of the evaluations. Perhaps the voting period would be shorter and to instill better engagement with the process for both voters and nominated entities.

Nothing is going to be perfect when you're a growing entity making inroads with a particular industry. Doing it right is the key to repeat it again successfully.

The next step is to get the award made (which we did and presented to Buick at the 2012 Chicago Auto Show!).