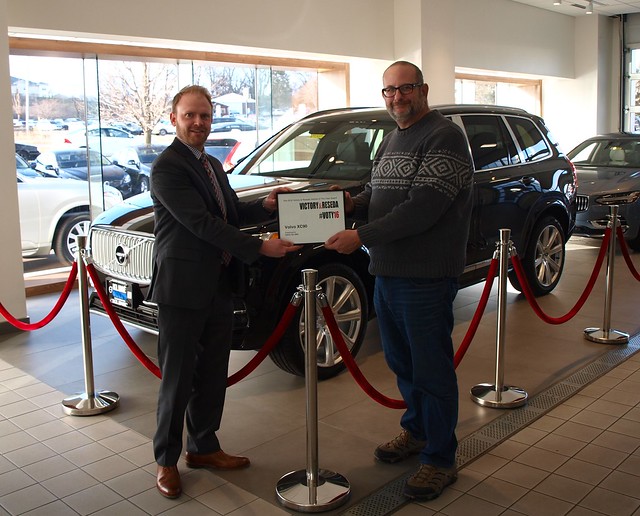 Handing off #VOTY16 to Grant Lohre of Kline Volvo in Maplewood, MN – Photo by the Minnesota Volvo Club

In celebration of the tenth anniversary of the first official Victory & Reseda Vehicle of The Year award – we are proud to say that it is #VOTY time!

To celebrate, we are getting things under way for a new season of #VOTY – all the way to the awarding of #VOTY17.

Getting to the #VOTY is the hard part. Each candidate vehicle receives a full evaluation on the format, metrics, and process is undertaken. These numbers are crunched and are presented to a Short List for panel evaluation. Then, a list of finalists is available for your vote. It is that simple.

Here is the official format of #VOTY17…

The Long List will consist of vehicles that were for a full review only from November 1, 2016 to October 31, 2017. These reviews will have appeared only in Victory & Reseda. No vehicles driven at events or written as Quickies and for other outlets are included in the Long List.

The Long List will not include former winners of the #VOTY unless the vehicle has been significantly changed from the last award.

The candidates on the Long List will go through an evaluation process based on the data from each review. Evaluations go through each review to glean metrics from exterior design, interior space, ergonomics and comfort, driveline and performance, driving dynamics, fuel economy, and pricing. Scores are tabulated from a 1-5 scale – 5 being best – and added up for a total score.

After compiling the scores, the Long List will be announced and a Panel of Media Professionals and Influencers will convene to review the list. They will present their choices to V&R.

November 15, 2017: The latest when the Panel will submit their input from the Long List. All scores will be compiled. The five finalists will be announced on our social media channels. The Public Vote will commence at 12:00 PM ET.

November 29, 2017: #VOTY16 will be announced on all of our social media channels and on V&R at 8:00 PM ET. There will be a dinner celebrating this award at Joey Nova's in Tonka Bay, MN.

The award will be given out at an auto show (to be announced) in the First Quarter of 2018. Expect a lot of Facebook, Twitter and Instagram traffic, along with posts on this site, promoting this year’s #VOTY. There is a hashtag to follow: #VOTY17.

As a bonus, we will be posting a look back at the first four #VOTY winners on this site! These were the four that were awarded prior to the rebranding of this site in 2011.

The #VOTY17 should be one where there is a real winner in the end. What makes this award worthwhile is it being a social media-based award that leads to one important element in the process – you.

Are you ready for November? V&R is ready! Let’s celebrate ten years of the most audacious vehicle award by a web outlet ever!