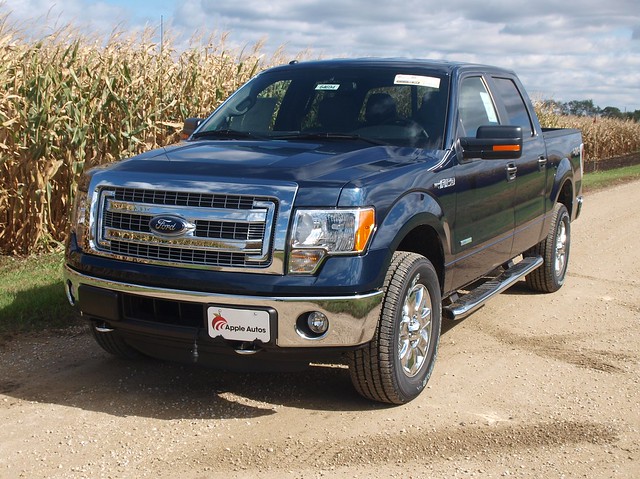 First off, General Motors sold the most of any manufacturer in the USA. The final tally came to over 2.9 million units sold across all brands – over two million of them were Chevrolets. However, the Bowtie's numbers were not enough to take the title of top selling automotive brand in the USA. That would be Ford with 2.37 million units leaving the lots. Toyota also sold over two million cars, trucks and utilities by its brand alone.

Ford Motor Company's total came to 2.47 million, with Toyota Motor Sales USA and Fiat Chrysler Automobiles also selling over two million units across their respective brands. Among luxury brands, BMW sold the most in the USA with over 335,000 units, followed by Mercedes-Benz and Lexus – both selling more than 300,000 units each.

From these numbers alone, they came as no surprise. The pundits have said that we would expect a huge sales year across the board as the economy still continues to improve. Trucks still remain the backbone of sales, while mid-sized sedans and compacts still make up the heart of the passenger car market. However, it would be the compact crossovers and SUV segment that made the biggest inroads in terms of sales growth and market share. The top eight entrants in this segment had year-over-year sales growth – some with double digit gains.

We have seen these patterns unfold. People want family and lifestyle vehicles, but have concentrated on smaller, more fuel efficient crossovers and SUVs. The mid-sized sedan remains the standard bearer of passenger cars. Trucks will always carry the volume for the domestic brands. It is worth noting that both the Jeep Grand Cherokee and Ford Explorer – both mid-sized crossover/SUVs – also sold more than 150,000 units in 2014. Also, the Kia Soul scaled over 140,000 units in 2014, proving the worth of the next wave in vehicle sales – subcompact crossover/SUVs.

For 2014, we saw no change in the model leaders from last year – let alone the last decade or so. The Ford F-Series continues to be the best-selling vehicle in this country. Ford Motor Company sold 753,851 of their pickups – the F-150 and Super Duty combined – yet incurred a loss of 1.3% of sales compared to 2013. Part of the loss was the impending switch-over to the aluminum bodied 2015 F-150, however the loss was not as deep as it seems on paper. Ford pushed a lot of the 2014 models out of the dealerships with enough incentives to recoup volume and profit levels.

Toyota's Camry continued to be the best-selling passenger car in 2014 with 428,606 units delivered. For 2014, Camry sales jumped 4.9% thanks in part to the introduction of a very extensive 2015 mid-cycle refresh. Also, if you notice the dealer ads throughout the year, Camrys have been deeply discounted to move all year. There are no indicators that Camry sales will slow down or drop in 2015. The mid-cycle refresh has been given mix reviews, but a lot of the tenets that sell the Camry remain enough to attract repeat, upgrade and conquest buyers.

As a sign of the rise of the compact crossover/SUV, the Honda CR-V lead all segments of its type with 335,019 units sold – a 10.2% rise over 2013. The CR-V took charge among its class through a combination of value, reliability and reputation. It also helped Honda create a triple threat at their dealerships with the Accord and Civic selling well over 300,000 units each in the USA – about over a million units between these three lines.

If there was model that made the biggest sales increase from 2013 among those that sold over 150,000 units in 2014, it was the Nissan Sentra. The compact sedan saw a sales increase of 41.9%. It was part of a successful year for Nissan, but what made the Sentra a huge success in 2014? It is a good car. Nissan certainly was aggressive selling over 189,000 of them in 2014. Their dealers may have got what the car was all about and knew they had a captive audience for one of their better values on the lot. While four of the top seven compacts saw a drop in sales from 2013, one wonders if the Sentra took on some new conquest customers in the process.

As people continue to talk about the lower gas prices we are still seeing this month, one should not make assumptions about market trends until you see how gas prices will go when we reach Memorial Day Weekend. Pump prices will go up – that is a given. As to how far they will go will determine the pattern of vehicle sales for 2015.

Last year was indeed a good year in the automotive business. This year should be promising, as long as the economy holds up.