Remember the concept of gainful employment. You might be experiencing it right now. You could be in an employment situation where you are performing duties that are not in your job description. Maybe you like doing these tasks…or, not.

At a time when Victory & Reseda was only a dream, I worked for a telecom company in Madison, Wisconsin in one of their call centers. The division I worked at the time with sold competitive telephone service in a few states using the lines of the incumbent phone company of those areas. While I taking calls in trying to get people switched from the evil ILEC (that stands for Incumbent Local Exchange Carrier) "land line" to the company's CLEC (Competitive Local Exchange Carrier), I was asked to add another task to my workflow.

I was the editor for our department's newsletter.

It was a fun task, but it wasn't easy. I did not want to just put out a newsletter. I wanted to make it easy to read, professional for anyone in the company to peruse and something that would not only raise the profile of our department and our company – but as a resume line item for me.

As a reward for my hard work, I was offered to drive one of the CLEC division's promotional vehicles. That is, as long as I wrote about it. Sounds familiar? I believe so.

I was all too happy to! Besides, my then-employer had the coolest promo vehicles in the telecom business.

They had two 2001 Chrysler PT Cruisers.

I know…what was I thinking? What were they thinking? The PT Cruiser was so derided for being too retro, too ugly, too wimpy, too…and so forth. What we know now was something I was absolutely clueless about.

But, my employers and supervisors saw me as "the car guy." I was, even back then. I was also the Managing Editor for a subculturally-focused news website, where I did automotive content on top of my usual editorial duties. How could I avoid the subject?

As I mentioned before, there was a contingency on publishing a story on my travels with the Chrysler PT Cruiser – which was internally called the DSL Cruiser. It's red wrap signified promoting the fact that in most of their CLEC territories, they can offer broadband internet as a bundled package with voice service. Back in 2002, getting a DSL connection into your home or business was a big deal.

Prior to getting the keys to the DSL Cruiser, I came up with a story strategy. I propose that I tour the areas they we offer service in. For us, that meant parts of Wisconsin and a bit of the Chicagoland area. The idea was to take photos of the DSL Cruiser in specific locales in our territory.

Once the story plan was in affect, I began my strategy with the DSL Cruiser. I would hit their territories and create photo ops in each place. My first run was to the Milwaukee area, where I stopped at the state fairgrounds and along the lake. Then, it was on to the Fox Valley with a final stop at a Wisconsin Timber Rattlers game on that first night. That is a minor league affiliate to a MLB team in the Class A Midwest League. After the game I drove home. Prior to the game, I took some additional photos at Fox Valley Stadium and a couple of stops in Oshkosh.

The second day was to reach the Janesville-Beloit areas, as well as Racine-Kenosha and Lake County, Illinois. I missed the Rockford, Illinois area. Not sure the reason. Maybe a wrong turn at Interstate 43.

As I said in the newsletter, I logged a lot of miles. No one was astonished as to the exact mileage I put on the DSL Cruiser, but no one wrote me up for putting them on. Maybe it was a good thing.

The point of doing these drives was to find engagement with the department as to expanding their knowledge of the territory they were working in. It is one thing to take a call from a potential customer and not why they could not get DSL or our service was not available for them to switch or state a new land line. Yet, getting that knowledge back to my then-coworkers was an important of my mission in the capacity of editor of the newsletter. 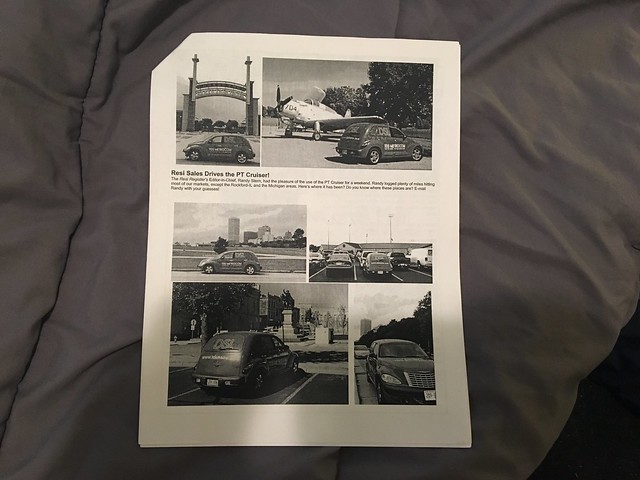 There is one thing, though. There was photographic evidence. Sadly, I only got to keep one photo (the one on top). The rest was property of said CLEC division. That company – TDS Telecom – is still in business doing both ILEC, CLEC and Broadband business in 25 states. I did see those photos in an old copy of the newsletter. The grayscale was a bit dark to reproduce.

Before I can crow on how much this current work has evolved in the past six years, this pre-history does have some resonance in what I do today. V&R is far from the newsletter I published at that former employer, but the skills I employed remain true today.

As for the PT Cruiser, it served its duty 15 years ago as a promo vehicle for the company. Chrysler dealers also welcomed consumers with their retro crossover/wagon built on the Neon platform. Obviously, we have collectively derided the concoction stewed up by the "merger of equals" between Daimler AG and Chrysler Corporation for various reasons.

If there was a silver lining to all of this – it did help promote a competitive broadband product to several Midwest households.