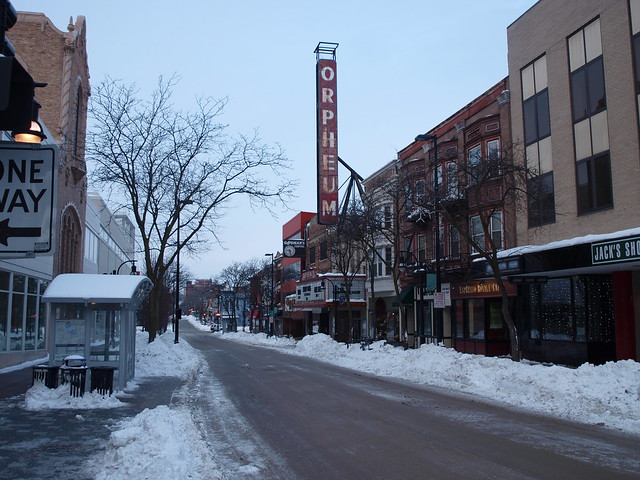 Part of being there is getting there.

A destination is only a place – Point B, if you will. While you are at Point A, considerations are made to make sure you get to the other side of the journey.

The automobile is motivation. Yet, it requires work. The work that is physical and mental at the same time. This work is not trivial. It is routine, but entertained by different vistas – if you venture beyond the familiar.

As Victory & Reseda, most of my journeys have been within familiar territory. The hub of the Twin Cities gave me access to vast miles of highway in a terrain that is dictated by the climate. It takes about a few hours – at least – to get somewhere really different. Madison, Fargo, Des Moines, Cedar Rapids and Sioux Falls are examples of "different." By now, they are familiar. Before 2000, these places were not on my radar. By now, each one has been visited at least once.

Every year, I try to go somewhere unfamiliar. In 2013, I traversed a route I only heard about. On my way to Thanksgiving that year, I took a different route towards Madison by going through a rural part of Southeastern Minnesota beyond Rochester on an old US Highway in a Kia Forte. It brought me to Decorah, Iowa – a town where choral students would become choir directors. From there, I crossed into Wisconsin through some beautiful bluff country before reaching the plains towards Mad Town.

Last year, a coupe of new routes were forged. My drive in August to Fargo included evaluating General Motors' OnStar 4G LTE connection in a 2015 Buick LaCrosse. Heading back, I took US Highway 10 through Detroit Lakes. It was one of those roads traversed by tourists for generations to meet the source of the Mississippi as a point of recreation and sport. Later in November, a GMC Yukon stretched another set of miles deep into the Iron Range to a town called Aurora. I supported a friend's dream that is now turned into an experience for him. That restaurant no longer exists. Being there, enjoying the food and conversation with the owner-friend to understand the tough nature of the Eastern Mesabi. I explored the rest of the area, coming through Grand Rapids to complete that part of Minnesota.

This spirit of exploration is what will drive the larger stories of V&R. There are themes that will be present when setting up these exploratory experiences.

The idea of driving in winter over miles was something I dealt with before. When I lived in Madison, I was able to understand how to drive in snowy conditions. Being a native of Southern California, these were experiences that were non-existent – unless you like skiing and would head to Mammoth Mountain or elsewhere in the Sierras. My brother and I had no serious interest in skiing – at least I had no interest in the downhill type.

My first big adventure in winter driving was in 2003 in a rented Ford Taurus. I would pick up the car at Chicago's O'Hare airport and drive it back to Madison. That part was fine, as I was acclimated to the cold. No snow at that time. I left work on a Saturday, heading to Rochester to stay with a friend overnight. So far no snow. I listened to the weather forecast carefully to see when this so-called snow storm was going to hit Minnesota. Back then, I did not have a smart phone or an app warning me of such weather events.

The next morning, my friend and I set off towards the Twin Cities. Our destination was Southdale Mall in Edina and brunch with a couple we knew up there. Snow already covered the rented Taurus. It was dusty enough to brush off. However, I still had not driven on the white stuff – or though a storm where the white stuff was coming down. Twenty-three years of driving and I never driven in snow – sounds like an interesting proposition to me.

US Highway 52 already had some white stuff down. It was not enough for plows to work on. Yet, one could heed caution before doing something silly – like a quick lane change or going too fast – before meeting the bottom end of a ditch. I took plenty of caution knowing what I was up against. I knew nothing of tires back then. Nor did I know what I know now about proper winter driving, measuring capabilities of vehicles on various winter surfaces and what not to do in these conditions. That would include the former slogan of the South Dakota Office of Highway Safety: "Don't Jerk and Drive."

We made it to Southdale and had a good brunch. I wished the stay was longer, but concerns over a larger storm would curtail our visit. It was back to Rochester to drop off my friend and onward to Madison, where the car was due back at O'Hare the next morning. The snow did catch up to me as I left home for the car return. Luckily, I took the bus home from the airport – in trust with the safety of its driver.

That was only the beginning. Though, I have been lucky since – careful, calculated, but lucky. Snow is not the problem I have in driving. It is the ice. If a road is not treated to remove the bulk of the ice from the road, the consequences on even the most careful and cautious of driver is heightened greatly. I prefer not to take that risk, due to experience on untreated highways combined with mediocre tires unable to manage such surfaces.

Of course, another argument is on the de-icing treatments used on these roads and their impacts on the vehicle. Would you rather salt or sand? I would rather not see a road surface that is caked with ice – period.

These thoughts are valid. I had enough experience to know what to do if things do go wrong. This is why it is best to be on the side of caution when driving in the winter up in these parts.

However, I have dedicated this blog towards the experience of the automobile. Those experiences should have some sort of context woven in with the adventure in mind. I am always up for an adventure.

Therefore, I am planning V&R's first road trip of 2015 next month. The plan is simple: Drive to the 2015 Chicago Auto Show. In the past, I trusted the airlines, Amtrak and intercity buses to do this trip and return me home. However, driving is the ultimate winter adventure – a test of a human being, a vehicle and 416 miles of interstate highway.

I have never done the trip straight through from the Twin Cities to Chicago. I normally break up such trips by staying in Madison for the night. Wisconsin's state capitol is a familiar sight – a pretty regular stop when doing the drive to Chicago or Road America. The adventure is not in Madison, but rather on the road through there to Chicago and back.

It is hard to say what kind of conditions will be there for the drive. The weather could be cold, sunny with clear roads, or snowy with the plows working overtime. How will the traffic be in Chicago, especially when coming in through The Loop? This is an experience I rarely do, so it heightens the adventure factor.

The idea is to tell the story of the drive, the auto show and any misadventures worth telling to a wider audience. Think of it as a Rated PG story – without Bambi and friends.

Oh, and there's a hashtag that goes along with this trip: #Road2CAS15 – you can use this on every social media channel nowadays! So, if you want to follow it live, Twitter (@MrRandyStern), Instagram (@resedabear) and V&R's Facebook page are your best places to follow this (mis)adventure.

This is just one such adventure you will read in V&R. There will be more to come…