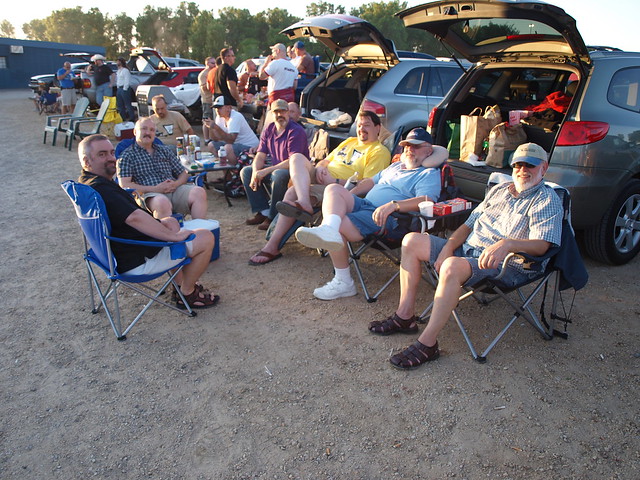 Yeah…that's how you're supposed do it! – All photos by Randy Stern

If you're my age or somewhat older, then you have a story or two about going to the Drive-In Movies. Some stories are worth telling, others may require some level of adult warning ahead of it.

In my hometown, the Reseda Drive-In played a prominent role for us from the 1940’s to its demise at the end of the disco era. The big screen could not be ignored as we drove up either Reseda Boulevard or Vanowen Street.

My family and I saw Jaws there. That big fish was as scary on the drive-in’s screen as it would at some high-end cinema down in Westwood or Hollywood. You saw your friends and plotted against everyone else while our parents and siblings wondered why it took so long to return from the concession stand.

With the demise of the Reseda Drive-In, my want to go another drive-in again diminished. Years later, my want to see films waned as well.

Back in July of 2009, I was invited to join a local group of guys called the Minneapolis Movie Bears to return a kernel of my youth back in the forefront. Those guys always broke new barriers for the Bear culture. They set up an event where we, as a group, would try to take over a drive-in theater.

There just happens to be a drive-in in the suburb of Lake Elmo just east of St. Paul with three screens and plenty of space for all sorts of automobiles. The Vali-Hi Drive-In is a summer destination for Twin Cities' folks who want to combine their love for cinema and their automobile together – all starting right at dusk. 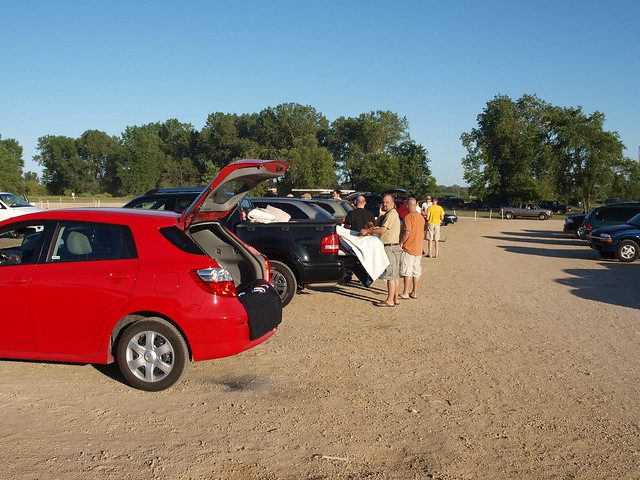 How does one go to a drive-in these days? Some moviegoers go about it the same way as tailgating at a sporting event with portable grills cooking prior to enjoying a leisurely view of the film. Just back the rear of your pickup truck, SUV/crossover or minivan into the space towards the screen, unload and make an evening out of it.

The idea of "tailgating" at the drive-in wasn't entirely new. Remember when station wagons were the ultimate family conveyance? Back then, the tailgates go down, the third row seat faced towards the rear of the wagon and the vehicle is parked backwards for the kids to enjoy. That certainly posed a problem with the parents now faced backwards from the screen.

What was missing from the experience of yesteryear was the food. Back then, no grills or any outside food were allowed. You got your popcorn, hot dogs and soda pop from the concession stand conveniently located in the middle of the theater. That certainly didn’t stop anyone from sneaking stuff into the drive-in, such as food from McDonald's, a flask of hard liquor, or a couple more folks inside the trunk.

To join the Movie Bears for an evening at Vali-Hi, I figured that an experiment is in order. Instead of a traditional station wagon or the SUV's of the day, crossovers and minivans, I decided to go with a basic hatchback sedan to see whether tailgating at the drive-in can work in realistic terms.

For this experiment, I drove a rented 2009 Toyota Matrix to the drive-in. In case someone may have forgotten, the Matrix is based on the Corolla. It is essentially the same as the Pontiac Vibe: a tall wagon-esque hatchback designed to fill five passengers and their gear inside. For the new Matrix, Toyota took liberties on grafting the roofline of their Corolla hatchback (known as the Auris or Levin, depending on the country) sold elsewhere in the world and raised the beltline a smidgen with a different front end to boot. The glasshouse between the Auris and the Matrix may differ, but the inspiration cannot be denied – though for a different purpose altogether.

The car itself looked good for tailgating, but I found a few problems. For one, the cargo area does not meet the bumper perfectly. There is a hump for the hatch to close in the rear, which may not seem entirely comfortable. I did bring some items that might ease the pain a bit, such as some food from the nearby Trader Joe's in Woodbury, a tailgating blanket to cover the cargo area, four pillows and a towel for food and cleanup.

The issue with compacts is the limited space to do anything, even with the rear seats down. A SUV or crossover would do the trick. A minivan is optimal. Still, experimenting with the Matrix provided an answer to whether any old car would do when going to the drive-in anymore – or, tailgating at a sporting event. Given that one of my fellow Movie Bears mentioned how he used to camp in his Ford Pinto, I figured I'd give it a go.

The drive-in was an adventure trying to locate. There was some confusion as which direction off of Manning Avenue to go, but I found it. Well, I found the queue full of automobiles. Just as I predicted, most of the vehicles were well equipped for the drive-in movie tailgate: pickup trucks, vans of all sizes, SUVs, and crossovers. My compact whateveryouwanttocallit just seem so out of place amongst the crowd. But, steadfast, I rolled with my fellow Movie Bears. 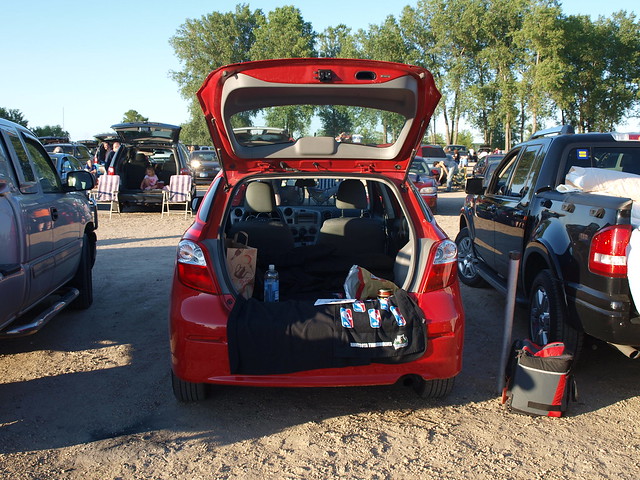 Even parked in-between two pickup trucks provided another level of inadequacy. Further in our group were SUVs full of furniture, including one set up with a full indoor/outdoor sofa, an ottoman and a coffee table. The group’s primary couple packed a propane grill from the back of their pickup truck and a plethora of air mattresses and folding chairs made up for being comfortable on the gravel-dirt floor of the drive-in.

In comparison, my Matrix's set-up was lame. For the movie, I stretched out from the backs of the front seats with pillows propped u on my back and feet dangling out of the bumper. I knew it would be just for one film I would manage watching the film from the back of the Matrix. Not even an air mattress would've helped the situation given the limited space and some contorsioning to move about. And, who knew I would make it through Ice Age: Dawn of the Dinosaurs?

Imagine having another person come with me to the drive-in. Fat chance! There's room for me – and that’s it! I'm sure two smaller people would be fine in the back of a 2009 Toyota Matrix, snuggling through Night at the Museum: Battle of the Smithsonian.

You would have thought I learned from the first time on how to properly tailgate at a drive-in movie. I did – sort of.

I went back a few times over the years with the Movie Bears. I even brought vehicles from the press fleets I happened to be working with to these outings. In 2012, I had the Acura RDX. That worked for its size, space and audio system to recast the soundtrack. I also got a bit smarter with the inclusion of lawn chairs and proper coolers to bring for snacks and drinks. 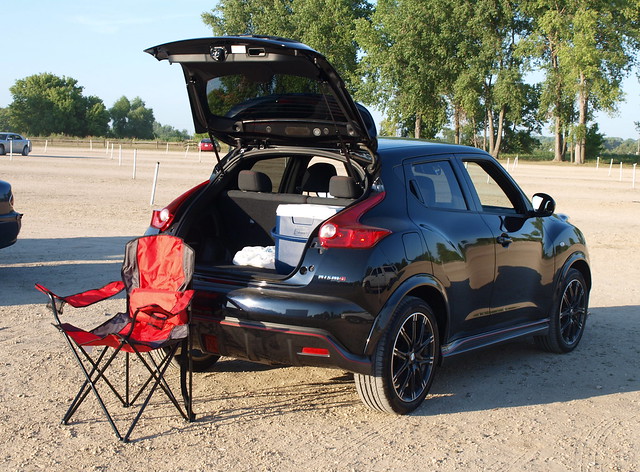 The last outing was in 2013 with the Nissan Juke NISMO. It reminded me of the first outing in the Matrix – a small crossover/hatchback that was not meant for tailgating. The lessons learned from previous tries at hanging with the Movie Bears at Vali-Hi kind of eased the pain.

Over these occasions, the Movie Bears themselves stepped up their tailgate game for the group. With more pickups and SUVs came grills, a whole lot of food and more people utilizing more lawn chairs and audio systems to enjoy the program of movies. There were those nights when everyone in line to get into Vali-Hi knew we were coming.

There is a curve ball in this whole picture. Tailgating was more designed for sporting events than drive-in movies. It is practiced to a higher degree in the parking lots of sporting events.

Later in the summer of 2009, I participated in a group function sponsored by a magazine I was contributing content to. It was a fundraising for several community groups that was billed as a "tailgate" – in the courtyard of the Aloft Hotel, two blocks away from the Metrodome. Granted, we were going to see a ballgame inside of former sports venue in Minneapolis…but, let me explain what they thought would be a "tailgate."

You see, their concept of a "tailgate" was to set up tables in the courtyard – that doubles as a the extension of the Aloft's parking lot- a massive grill, a food spread and a mini-bar selling beer and bottled water.

I'm sorry, but that's not a tailgate. It's more of a catered BBQ luncheon with swag bags full of furniture polish, advertisements and a small bottle of Bacardi flavored rum. 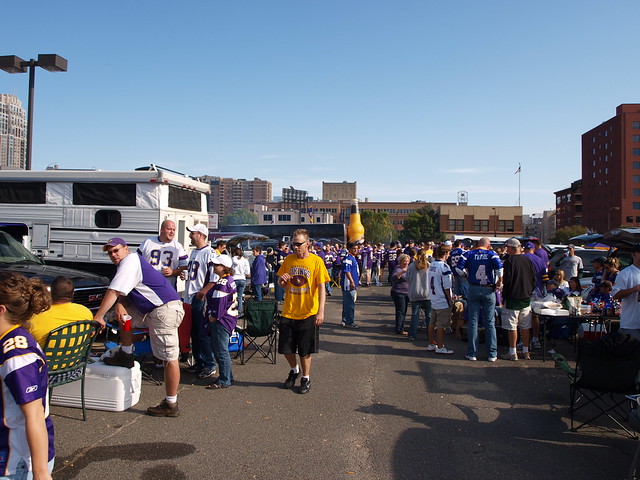 A tailgate is always an informal affair, achievable on various scales of sophistication. Sure, one can bring out the propane grill on wheels, the finest meats from the local butcher, bottles of wine, a cheese tray under a portable party tent and folding chairs. Then again, I'm describing a typical tailgate at Candlestick Park before a San Francisco 49ers game – during the 1980s.

Whenever I went to a Minnesota Vikings game, I can count on some honest tailgating outside the stadium with darn good food and plenty of activity. Yet, unlike most football stadiums, the Metrodome was located in an urban setting where the parking lots around the stadium are used as commuter lots during regular business hours. On any given Sunday during the fall, these lots blossom into a sea of purple majesty with horns showing everywhere. Whether it's a bunch of people around a Weber grill wearing their favorite Vikings' jersey or an RV done up in purple with a full kitchen kit inside and a Vikings tent for the spread, one can say that some of best tailgating is done in the Downtown East section of Minneapolis.

Sadly, that atmosphere is gone – thanks to the new US Bank Stadium. And Super Bowl LII next February.

I have always advocated simplicity. To me, a tailgate shouldn't have to cost an arm and a leg, but it should be creative for the palette. Tailgating starts with some planning: How many people are coming, how much food and drink should be available, what kind of food and drink should be served, what grill and furniture will be needed and what vehicles should be there to carry, secure and take home all of this stuff!

I could go on how to tailgate…but, that would be another post altogether…

The whole point of these exercises in "trying to be social," "being a part of a community" and so forth was to integrate the love for the automobile with these opportunities to engage with others. The drive-in movie sounded like a charming idea. It still does.

Would I do it again? Not sure. But, it did open my eyes as to an art that purely North American – the use of an automobile as a way to bring people together. The art of tailgating is one that is to be experienced – whether it is in a parking lot outside of the big game's venue or some drive-in movie theater nearby.