This is the car that has made Victory & Reseda what it is.

If you read this entire site, the obvious answer to all of the above is the Buick Regal.

Many cars, trucks and SUV/crossovers have come and gone on this site and in other outlets I contributed to. Yet, one keeps on popping up at the right time. This mid-sized sports sedan with premium ambitions always held my attention to engage in various times throughout the past five years. From the 2011 turbocharged sedan to the GS from last December, the Regal is a rather special car that has dotted this career with nothing but highlights.

This car was originally developed by Opel as a challenger to the mid-sized segment. GM Europe knew it had the right car to face down the likes of the Ford Mondeo (we call it the Fusion on these shores), Mazda6, Volkswagen Passat (the European-based version, that is) and even the mighty BMW 3-Series. It has since been transformed into the Buick we have seen here since 2010.

There is a twist to the Regal story. One that I may have told over time whenever one pops up in my work. Buick has been leading the charge as one of the most popular brands in China. It seems that the Chinese love the Buick Regal more than we do. That may be so, but we are starting to catch up. In fact, Regal sales in January of 2016 has more than doubled in the USA. Well…try an increase of 234% over the same period the year before.

All of the sudden, we are talking about this Oshawa-built Buick premium sports sedan again. At least, I am…and for good reason.

Let me go back to December of 2015. It was sometime before Christmas and I was pretty excited to see that I have a GS coming. In my reviews, I never drove the GS. I always wanted to. That all changed in May of 2014 when I took a GS all-wheel drive model onto Road America's spectacular course. I will admit that I was not polished on the track, but it felt good to take a familiar steed onto it to feel it out. The GS had a few things I wanted to try. GS mode was one of them. That certainly locked me into the car.

A year later, I took another Regal GS onto the track. This time, it was Road America's karting course. This was where the Midwest Automotive Media Association held their Spring Rally's autocross. The Regal GS might be “big,” but it wasn't as unwieldy as that other favorite car of mine – the Lexus RC F. I was told that I did the course in 42 seconds. 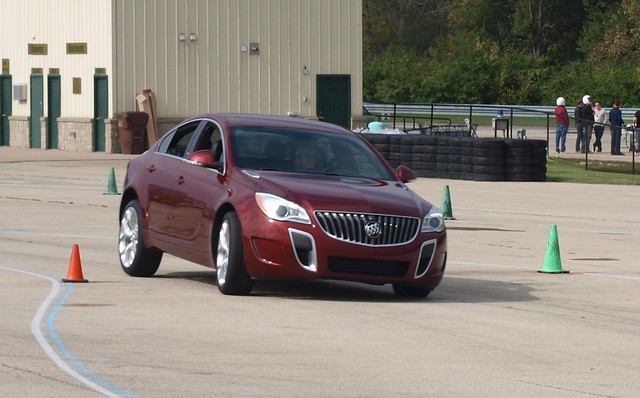 Later in 2015, I was invited to a special track day with the Regal GS at Autobahn Country Club in Joliet, Illinois. We had both autocross and track opportunities with the GS. The more I drove it in both arenas, the more I felt good with it.

There was one thing missing in the GS experience – having one to actually review on my home turf. I had one set up for me, but I was a bit nervous. I knew that December in Minnesota could be either wintry or a bit strange, so I hoped it would have all-wheel drive and winter tires. After all, I wanted to give the Regal GS my usual “living with it” test.

When I finally settled down behind the wheel of this Crimson Red Tintcoat 2016 Buick Regal GS, I knew I was in for a real treat. Not only did this had all-wheel drive, but it wore twenty-inch Pirelli Sottozeros! You should have seen the huge smile on my face when I laid eyes upon it.

Why should I be so excited about it? Haven't I driven my share on a couple of motorsports venues? Well…I had a few things in mind for this GS. It would really depend on the weather that week. I had two scenarios to consider: Snow and clear, twisty roads. If it snowed, then I am putting the all-wheel drive and winter shoes to the test. Otherwise, I would find a nice set of roads and put it into GS mode.

The snow never happened. It was a bit warmer than usual that week, which put Plan B into effect.

It was probably a good thing that the weather was a bit warmer than usual. It was cold enough for the Pirelli Sottozeros to drive on, which is always a concern with winter tires when reaching its upper climatic limits. In fact, I love these tires. A while back, I had a set of them on a Maserati Quattroporte I reviewed and they offered superb traction and grip. On the Regal GS, they were simply terrific!

There is a lot to love about the Regal GS. It's nose has these huge gills below the grille line. It is what makes it distinctive from the rest of the Regal lineup. The aggression continues with the twenty-inch chromed wheels and the integrated wing on top of the trunklid. The theme continues inside with aggressively bolstered seats that were comfortable and supportive at the same time. Add the flat-bottom steering wheel and the GS button to the mix, and this car was ready for action. 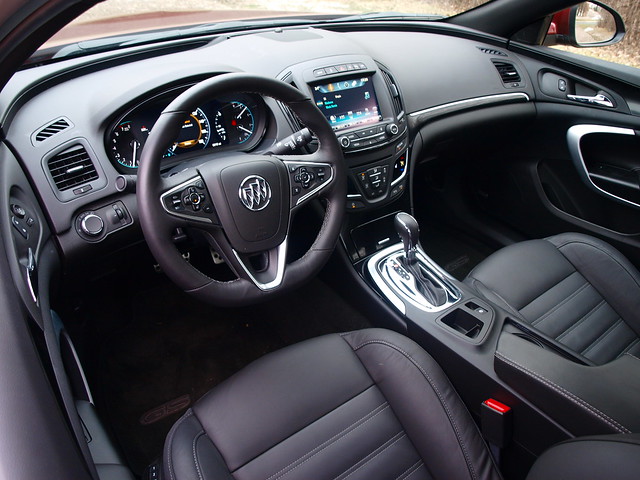 It is these details that drew me into the Regal GS in the first place. After six model years, these details still do it. I just cannot see myself driving any other Regal than the GS…let alone any other Buick.

After plenty of track time, I always felt that truth of a car will reveal itself on public roads. Not many owners will experience their car on Road America or any motorsport venue during their ownership experience. The closest thing to this is a good road. It does not have to be Angeles Crest Highway or the Blue Ridge Parkway. For me, it's an old familiar road with a few twists and turns. It needs just a little smooth patches to let me stretch out the car's sea legs. It has to put me at ease, but enough to challenge the car's limits.

This is why I take the vehicles I drive to the outer limits of the Twin Cities. We are fortunate to live in a metropolitan area where the countryside meets suburban sprawl quicker than any locale I lived in.

It is on these roads where the Regal GS showed its great side. Though it took some switching between GS and Sport modes to make it work. GS is great for sharp handling scenarios, but the dampening could get a bit too firm when the surface gets rough. Sport mode smooths out the dampers for an enjoyable, but exhilarating ride. I did not notice any roll or lean in the turns in Sport, which is the sign of a good suspension set-up. In the case of the Regal GS, it entails Interactive Drive Control and the Hi-Per Strut front suspension. In other words, advanced dampening helps to keep the GS even through the curves while grabbing every mile it can win.

For every mile on, the Regal GS is very comfortable. With bolstered and supportive seats, I was able to enjoy every mile of the road. There had been some trepidation back in 2011 that I would not enjoy the GS's seats. As a slightly thinner person, I finally found the sweet spot behind the wheel. Every hour behind the wheel was well spent taking command of the GS through miles of country roads and small town streets.

The Regal GS was also thoroughly entertaining – in many ways than one. From the cabin, Bose provided the soundtrack off of Buick's IntelliLink infotainment system. It included hits, such as SiriusXM, local FM radio with HD channels, and the Pandora streaming service channeled though Bluetooth connectivity. Its navigation system never steered me wrong, especially when OnStar was called to send me somewhere I needed to be. The Regal GS is also the most connected sports sedan, with OnStar 4G LTE Wi-Hi hot spot on board. All of this satisfied the tech savvy side of me.

However, it was under the hood that made the sweetest sound. The 2.0 liter Ecotec turbocharged four-cylinder engine and its 259 horsepower showed that you don\t need a tuned exhaust note to be motivated to drive. 'Though it served up enough power on the track, the GS's turbocharged engine shows its best side on the road. It delivers the goods with ease. Once you get over the micro-quick turbo lag, it's all thrust. The six-speed automatic actually is matched well with the turbo, sending highway speeds down to below 2,000 RPM. The GS's all-wheel drive system does a superb job keeping those Pirelli Sottozeros on the road. 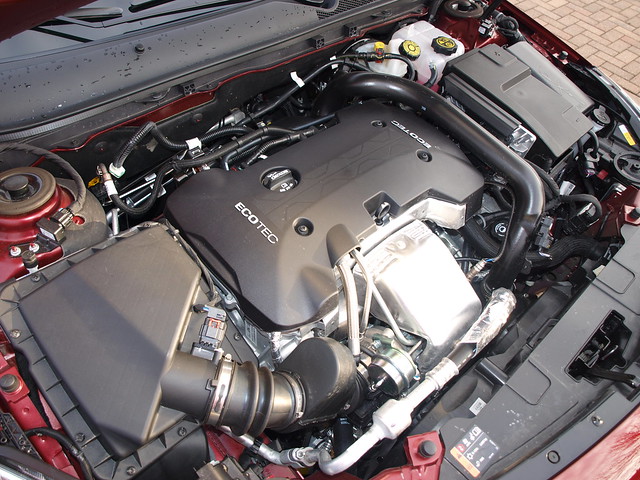 Everything else just falls into place. Depending on which mode you are in, the steering system responds quite well, regardless of the weight put upon its turning action. Brakes are very good with solid stopping power and good pedal response. Let;'s not forget that the active safety features found on this Regal GS worked quite well for not so seasoned drivers. They do help, but they could be evasive in spirited driving. However, if you want to pace yourself on a long trip, there is no problem turning on the adaptive cruise control, setting it to a safe distance and allow yourself to maneuver the Regal GS when the opportunity arrives.

Driving the Buick Regal GS was more than just fulfilling a storyline that established this site for the long run. It also affirmed a relationship with a car that had been instrumental in moving this work forward. From track and autocross work, the Buick Regal GS created a bond that enabled me to learn more about driving than just taking a car on the road.

Most of all, this car has been forgotten by a lot of potential customers. While some people think you need a more prestigious badge to have fun, you still end up spending $50,000 for the privilege. Buick doesn't think you have to spend as much for having fun. A Regal GS all-wheel drive with all of the key options has a sticker price of just $41,885. In relative terms, this is a good value. 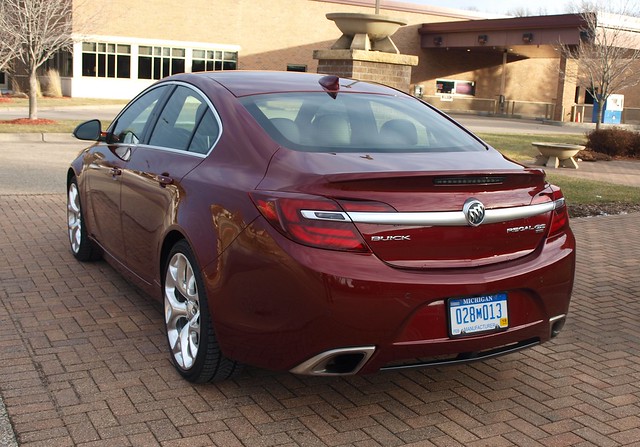 If one thing could sum up the experience of five years of Buick Regals, it would be appropriate to culminate this story arc with its finest variant – the GS. There had been some vehicles that had won my heart more, but nothing had the kind of staying power over these past five years of this work than the Buick Regal. This is why there is a spring in my step, a turn of the head and a thumbs up whenever I see a Regal GS on the road. Though, frankly, I would prefer being the one driving it.